Memories of Miller’s One-Room Schoolhouse and the Surrounding Area

This Gazette and Daily photo captures the interior of Miller’s Schoolhouse in Springettsbury Township during the beginning of the 1947-1948 school year.  The teacher, Mrs. Erma Daron, normally taught students spanning eight grades in this one room, however this year there are no eighth graders in the class. 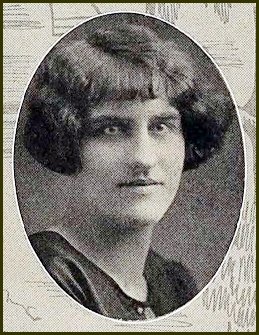 Mrs. Erma Throne Daron had a very long teaching career, which included many years at Miller’s.  After graduating in the Class of 1926, at the State Normal School in Millersville (now Millersville University), Erma’s first teaching job, during the 1926-1927 school year, was at Miller’s.

This is Erma S. Throne’s Class of 1926 Yearbook Photo.  The photo is from Ancestry.com’s collection of scanned yearbooks; specifically page 68 of the 1926 Touchstone, the Yearbook of the Class of 1926 at the Pennsylvania State Normal School in Millersville, PA.

After her initial year at Miller’s, Erma is moved around to other One-Room Schoolhouses in the Springettsbury Township School District.  Between 1927 and 1935, Erma Throne taught three years at Stony Brook; followed by two years at Glades and three years at Mr. Zion, before returning to Miller’s.  Erma then taught at Miller’s from 1935 to 1951; including her first year of teaching, that is 17 school years as the teacher at Miller’s School.

During 1940, Erma Throne married Franklin H. Daron.  When the One-Room Schoolhouses closed in 1952, Erma Daron continued to teach in the newly formed Central School District.  In a comment to my post on Monday, Jim Fahringer noted, “I knew Mrs. Erma Throne Daron. When I first started to teach in Central School District in 1969, Mrs. Daron was still doing substitute teaching.  Her husband, Frank, actually built the house we lived in.”  Erma’s obituary in 1994 noted that she taught in the Springettsbury Township and Central-York School districts for 44 years.

Erma’s classmates at Millersville in 1926, wrote this about her in the yearbook:

Erm’ who is ever seen with a smile and who is always chatting unceasingly is a true classmate.  Late and early she has a cheery word for everyone, and usually contrives to make everybody feel just a little more cheerful when she is with them.  We are confident that the enthusiasm and the zeal with which she entered upon her work here will assure her success in the role of a teacher—a good teacher.

Comments with your memories of Erma Daron are welcome.

Turk Pierce provided memories of Miller’s One-Room Schoolhouse and the surrounding area in the mid-1940s.  When Turk states that he walked down the hill to school, the initial section he traveled is now called Spring Ridge Road.  That road extends up the hill from Ridgewood Road, west of the Alpine Road junction.  The Pierce Family lived in the highest building on that very steep hill.  Here are Turk’s memories:

In 1945 I started first grade at Miller’s School.  The building still stands, as a private residence, on Heindel Road.  (When I attended, Heindel Road came to a T at Concord Road.  The roads have changed quite a bit.)  The teacher was Erma Daron, who lived on Locust Grove Road in Stony Brook.  The school had about 32 students, eight grades and no electricity or running water, just outhouses.  After eight grades, students went to Hellam High School.

On my first day, I remember wearing white shorts.  As I walked down the hill, I joined other children.  The first was Sylvia Wolf, who was six years older and used to baby-sit us.  She was the granddaughter of Mr. And Mrs. Henry Wolf and they lived on Ridgewood Road northwest of the Alpine Road junction.  The house next to theirs, east of Alpine Road, on Ore Bank Road, was home to the Hewitts.  Gary was my age, Janet a year or two younger and Gladys four or five years older.  East of them, up the hill, lived Marlin Miller, he was younger than me, with fiery red hair.

At the bottom of Alpine Road was Preston (Pret) Chronister family.  All younger than me, Audrey was the oldest, then Judy and at least another girl until a boy was born.  In the wintertime Pret would charge people to skate on his frozen pond.  Catty-corner from them was a hermit, Mr. Hauser.  When he died, in the 1970s, I had a chance to go into his house and it was crammed full of junk.  It has been fixed up very nicely now.  A private road ran from Ridgewood Road down to Pleasant Valley Road, and on this road lived the Sterner brothers in two adjacent houses.  Mike and Pat, who I think were cousins, were our playmates.

There were people named Inners and another house on Pleasant Valley Road, which ended at Pleasant Acres Road, now called Arbor Lane, as it dead ends at Route 30.  On the corner a house was built around 1950 and Bill Markey, my age, lived there with his family.  We used to play in the woods across the street; these woods have been torn up for the new Pleasant Valley Road.  On down Pleasant Valley Road was a family named Crowe, with children a little younger than I was; the Flinchbaughs, empty nesters; and the Dietzes.  Ray Dietz was my father’s boss at S. Morgan Smith and he later sold garden tractors and my father helped him with that, also.  He had a machine shop behind his house, which can still be seen from Route 30.  The Dietzes’ son Ray, Jr., built a house just north of his parents’ for his family.

The Bell’s house was taken for Route 30.  Gloria was in eighth grade when I was in first and George was a few years older than I was.  Next to them was the Rubys.  Ruth Ann was my brother’s age.  Then the Ferrees; Carl was my age and my best friend, but we got in trouble for breaking some windows at the Heindels’ tobacco barn.  Freddie Hubley, a little younger, lived next to the Ferrees.  Evelyn Heindel was between my brother and me and we heard recently she was killed in a horseback riding incident when she was in her 20s.  She had a younger brother, I think.

The school also drew from a couple of houses west of Mt. Zion Road.  John Roth, whose father, I think, managed the Meadowbrook Farms, was my age.  Also living in that area, were the Harper girls, Patsy and Mary.  I was between them in age.  The final area from which the school drew was the trailer park behind the Paddock.  I remember two girls who babysat us coming from there, Vivian Witherow and Norma Jean Tew.  Also a Japanese family (Tomasso?) lived there after the war, with Richard and Naomi coming to Miller’s.  Lee Bowman is another trailer park boy I remember.  The oldest boys at the school were Tommy and Clarold Ness, who lived on a farm near the school.  The farmhouse still stands next to the York County Prison.  Tommy was 16 and in second grade and Clarold 14 in fourth grade.  Today they would be special-ed, but Mrs. Daron handled them pretty well.

A correction will be made to the to the early roads drawn as yellow lines, on a 2014 Bing.com aerial photo, in my post on Monday.  When Miller’s was utilized as a schoolhouse, i.e. before 1952, Turk Pierce noted the playground was south of the schoolhouse and the road looped on the north side of the building.  The road was changed to loop around the south side of the schoolhouse, as it does today, after the building became a private residence.

Turk also noted two additional details.  The schoolhouse was surrounded by farmer’s fields on the east and south, and by sort of a jungle to the west, along the creek.  He thought Heindel Road was the north-south road to the T, as it came from Heindel’s farm and asked the question, wasn’t the east-west road, by the schoolhouse, Concord Road?  If anyone can confirm the road names prior to 1952, please comment.

The following photo does not go back to school days, although it is close.  This detail is from an aerial photo taken July 11, 1956 by Dave Allen and is from the Springettsbury Township Historic Preservation Committee Archives.  The view is looking to the northeast; I’ve noted Miller’s Schoolhouse location, surrounded by open fields. 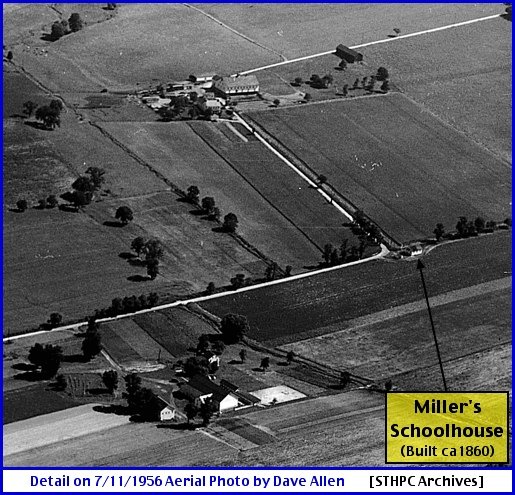