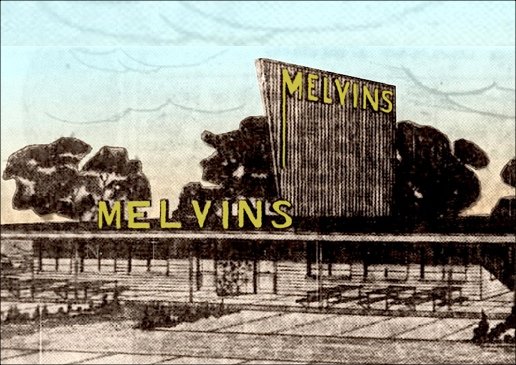 Jean Kohler wrote of Record Hop memories at the second location of Melvin’s Drive-In during the early 1960s. Those record hops were held nightly, all summer long, at Melvin’s along Haines Road; after the original Melvin’s Drive-In was demolished in the 1950s during I-83 construction east of York, PA.

Jean opened her e-mail with: “I liked your article about Melvin’s in Ocean City. I never went to that beach town, but wonder if that is why the new Melvin’s on Haines Road closed so quickly? Home from college in 1962, I got a job that summer at the Weis, and across the road, Melvin’s was our hang out. Have you ever spotted any photos of those record hops? It certainly was a happening place that summer.”

If any readers have photos of those Record Hops, send them my way; I’ll share in a follow-up post. I did discover Architect George Flickinger’s sketch of the new “Melvin’s,” within the October 24, 1959 issue of The York Dispatch. Part of that sketch is shown in the introductory illustration, with a little color added.

The following is the Ice Cream Room end of the new “Melvin’s”, located along the west side of the first block of Haines Road, Springettsbury Township. The far right, Ice Cream Room part, faces the Lincoln Highway.

The plan was to open the new Melvin’s in May of 1961, however various set-backs pushed the opening back to September of 1961. Per the following ad, the Ice Cream Room opened first, and the Food Service section, at the south end of the drive-in, opened about a week later.

When I-83 was constructed at East Market Street, a Weis Markets was on the north side of the street; across from the original Melvin’s Drive-In. The interstate construction forced both businesses to move; interestingly both selected the first block of Haines Road; and, like before, on opposite sides of the road.

Jean Kohler commented: “Gino’s was located almost outside the back door of Weis. It was our favorite for lunch breaks. Gino’s had much faster service and was less expensive compared to Melvin’s.” I decided to compare prices. Gino’s opened in April of 1961, with 15-cent hamburgers and 20-cent thick milk shakes. Melvin’s opened in September of 1961, with 25-cent hamburgers and 20 or 35-cent frosted malts. Melvin’s Famous Bar-B-Q’s were 35-cents.

Jean thought 1962 was the only full year the Haines Road Melvin’s was open. A Public Sale of Melvin’s Restaurant Equipment and Goods took place June 11, 1964. General Tire Company moved into the former drive-in building after constructing several attached garage bays. The back end of Walgreen Drug Store now sits on the site of the Haines Road Melvin’s.