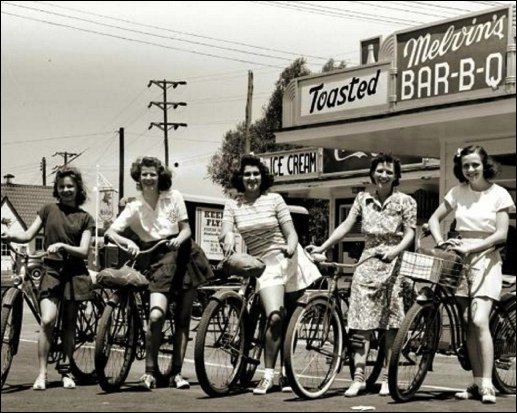 Kit Lentz submitted two Melvin’s drive-in photos; which are new to me. Who can identify these five girls at the original drive-in location, next to Mill Creek; photo is probably from late 1940s or early 1950s? Melvin’s original drive-in was demolished in the late 1950s, with the construction of I-83. Kit is looking for a photo of Melvin’s second location, in business for several years in the early 1960s, near the southwest corner of East Market Street and Haines Road.

Quoting the e-mail from Kit Lentz, which accompanied the photos: “Nice work on your Melvin’s posts. I heard your family history talk in April at Swissvale. It proved useful advice to utilize photos as a trigger of memories and stories when interviewing relatives. I spent a few weeks in the summer of 1950 living with Aunt Gloria and Uncle Jim in York. Melvin’s seemed to be a constant, either ice cream, food, or both. I could swear one, or more, of the girls in the photo worked at Melvin’s. I’ll be amazed if my memory was that good from 68-years ago. After marrying in 1961, I took my hubby to meet Gloria and Jim. They took us to Melvin’s new location. We were there for hours; good food and good conversation! Could you provide a photo of that second location?”

The second photo, submitted by Kit, is an East Market Street view of Melvin’s drive-in. Some of the roof level signage is very overexposed, so I did a photo combination; pointing out were the Melvin’s sign, backing the girls and bicycles, is located. The girls are being photographed while posing next to the west side, at the rear, of the drive-in. The white building at the far left is a branch office of York Trust Company; located on the northwest corner of East Market Street and North Hills Road, with a Weis Market, out of site, immediately to the west of it.

How did I know the correct placement of the “Melvin’s BAR-B-Q” sign? I did another photo combination, pairing Kit’s submission with a photo in my collection; containing another group photo in the front of the west side of the drive-in. Specifically, look at the right side of my lower photo.

It took six tries for Melvin to get a variance from the Springettsbury Township Zoning Board for the sign he wanted to place at the Market Street entrance to his drive-in. With his May 10, 1961, approval he could place a 7’ x 5’ sign within the 30 foot setback, but no closer than 15 feet to the Lincoln Highway. I wonder, was that a sign from the original drive-in location? What ever happened to that Melvin’s sign?

I remember our family went to the new location only a few times. The Bar-B-Qs did not have the same taste and the ambiance was gone. Melvin’s at this new location did not stay open very long. The Public Sale of Melvin’s Restaurant Equipment and Goods took place June 11, 1964. General Tire Company moved into the former drive-in building after constructing several attached garage bays. The back end of Walgreen Drug Store now sits on the site of Melvin’s drive-in 2.0