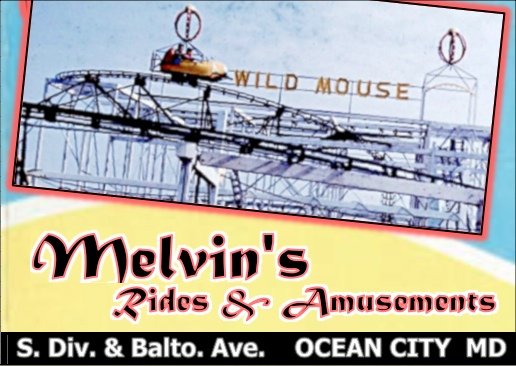 During the 1960s, Melvin's Rides & Amusements was located at South Division Street and Baltimore Avenue, near the Inlet, in Ocean City, MD. It was a follow-up business by Melvin L. Kauffman; after his popular Melvin’s Drive-In was taken during I-83 construction east of York, PA. (Submitted)
Posted by Stephen H. SmithJune 28, 2021July 24, 2021 All Posts, Buildings, Businesses, Maryland, Various Locations, York County

During the 1960s, Melvin’s Rides & Amusements was located near the Inlet, in Ocean City, Maryland. It was a follow-up business by Melvin L. Kauffman; after his popular Melvin’s Drive-In was taken in the late 1950s; during I-83 construction east of York, Pennsylvania.

Richard Wolfgang prompted this post, with his recent correction to one of my posts about Melvin L. Kauffman; where I mistakenly wrote he retired to Florida. Quoting Mr. Wolfgang’s comments: “Melvins did not retire to Florida. He moved to Ocean City, Maryland. He owned and operated some amusement rides on the boardwalk. He had a house in north Ocean City. When he retired from there, he moved to a villa in Spain.”

During a review of prior Melvin’s Drive-In research, I discovered a long ago comment from Donna Landis. Her dad “worked for Melvin’s in York and at the shore.” Last week, Donna replied to some follow-up questions, with: “Every time our family went to Ocean City, we heard his stories about working at Melvin’s Rides and Amusements. Their main competition was located in the same block. The feud between Melvin’s and Trimper’s figured in many stories. Like the time several of the mirrors were busted in the Mirror Maze. Dad was always animated in describing Melvin fuming while claiming sabotage by Trimper’s.”

To more of my questions, Donna recalled; “Dad worked at Melvin’s during the summer of ‘65 or ‘66, and a few years later, filled in during a week or two. The main draw for Melvin’s was the Wild Mouse ride. I do not remember dad telling when Melvin’s opened. If he did, I do not remember. My sister might have more of dad’s stuff, from those years. When found, I’ll share.” As for now, my search of Newspapers.com turned up the earliest discovered Melvin’s notices appearing in June of 1964.

The Roller Coaster Database (rcdb.com) lists the Wild Mouse ride at Melvin’s, in Ocean City, as one constructed by B. A. Schiff & Associates; while noting: “This Wild Mouse was part of Melvin’s Amusements, which Trimper’s Rides is thought to have purchased in the early 1970s and combined with their own park to form single larger operation.” The database also notes this is a large Wild Mouse ride, i.e. for permanent installation; and that it was in operation from 1963 to 1984.

Thus it is possible Melvin’s Rides & Amusements was established in 1963. The following 1957 ad in The Billboard is for the Wild Mouse amusement ride; as developed and initially sold in the 1950s by B. A. Schiff and Associates, Inc., of Miami, FL.

The Wild Mouse ride uses single-cars on a track with very tight turns. The cars’ wheels are positioned closer to the rear of the car; which when entering turns, gives the sensation that the car is about to fall off the track. The sensation is enhanced, because this action occurs as the car travels towards the edge of the structure.

In the following help wanted ad, Melvin’s is looking for someone to specifically operate the Wild Mouse ride in 1965.

The Roller Coaster Database is the source for the following photo showing typical installation of a B. A. Schiff and Associates’ Wild Mouse amusement ride. The entrance and exit “Wild Mouse” passages appear to be a signature feature of the majority of B. A. Schiff installations. Those oversized passages are recognizable, facing South Division Street, in an historic aerial photo showing Melvin’s Wild Mouse from the backside. That aerial photo appears later in this post.

I sent the following 1966 ad to Donna Landis; to see if it would jar any memories or stories that her father shared. Donna replied: “Much of the year dad worked there, Melvin continually talked about getting out of the business, chiefly because he was frustrated with unfair treatment by the local government, whenever he wanted to add things to the business. Melvin claimed it was from pressure applied by the politically connected Trimper’s. Maybe the ad is from one of those outbursts. Melvin reconsidered, because the business was not sold for several more years, since dad filled in a short time in the later 1960s.”

In a search for a 1960s era high-resolution aerial photo of Ocean City, Maryland; the collections of the Edward H. Nabb Research Center for Delmarva History and Culture at Salisbury University were discovered. They have a 1960s-1970s era aerial photo, with the following view looking north from the Ocean City inlet.

The resolution is high enough to allow zooming in on the areas where Melvin’s Rides & Amusements and Trimper’s Rides where located in the 1960s; i.e. when they had separate businesses in the same block. The locations of those businesses and the Wild Mouse ride are pointed out on the following aerial photo.

Help wanted ads for Melvin’s appear several years following 1966. The latest was discovered in 1970. The following June 29, 1970 ad shows Melvin’s is still a separate amusement business in Ocean City, at that time.

In commenting on the following late-1970s brochure for Trimper’s Rides, Kristin Helf, the content manager for OceanCity.com, noted part of the Wild Mouse track is shown in the background at the lower left corner.

Recall, The Roller Coaster Database (rcdb.com) noted: “This Wild Mouse was part of Melvin’s Amusements, which Trimper’s Rides is thought to have purchased in the early 1970s and combined with their own park to form single larger operation.” Trimper’s continued to operate the Wild Mouse until 1984.

The primary ride, pictured on the above brochure, is the Toboggan Roller Coaster; in which a single car, with rider(s), is pulled to the top via a vertical chain lift, enclosed in the column. The car descends, via gravity, spiraling around the outside of the column. The ride went into operation at Trimper’s in 1970s and was retired in 2009.

The following is a present Ocean City view looking south on Baltimore Avenue at South Division Street. During the 1960s, Melvin’s Rides & Amusements was located at the shown corner. Trimper’s Rides purchased the business of their neighbor, Melvin’s, about 1970. The site continues to house the outdoor rides of Trimper’s.