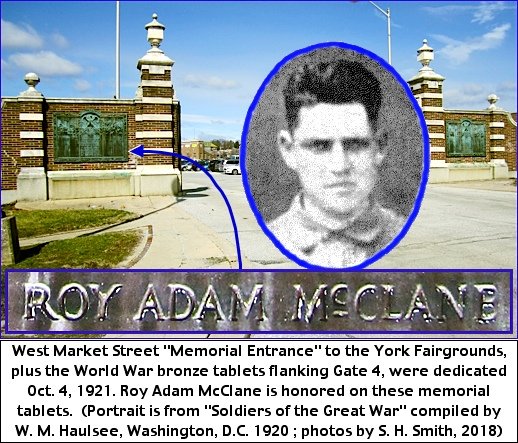 The walls flanking Gate 4 of the York Fairgrounds contain the names of York County’s fallen during World War I. In this and subsequent posts, their tales will be shared from seldom-used sources.

I’ve used “York County and the World War 1914-1919,” by Clifford J. Hall and John P. Lehn as a source in past World War I posts. That source provides photos for about two-thirds of those in York County that gave their lives in the defense of freedom during the Great War.

The three volume set of “Soldiers of the Great War,” compiled by W. M. Haulsee, in 1920, provides a much larger source of photos; filling in a nice amount of those missing in the Hall and Lehn publication. The portrait of Roy A. McClane, in this post, is from the Haulsee source; Volume III, page 89.

The York County History Center contains a scrapbook of WWI letters from soldiers, which were submitted for publication in newspapers. One such letter is from one of Roy’s fellow soldiers, soon after he returned to the States; it was to Roy’s mother, sharing the last days leading up the death of her son:

“Dear Mrs. McClane—I don’t know if this will reach you or not, but I want to tell you I was with your son, Roy, up until he was killed. We went on the front together, and stayed there until he was killed. Your Roy done his bit like a man. I never heard him kicking about anything. We often went for days with little to eat, but it could not be helped. We were fighting for humanity and freedom, and to save our dear mothers’ from ruin. Me and your boy went over the top side by side. There was death on all sides of us, and I was facing death and hell both at the same time.”

“Mrs. McClane, live for God and you will meet your son in the next world. I saw sights when I was on the front, and would often wonder why God let things like that occur, but it was all for a purpose, and I think the boys that get back will be better men than they ever were, and if your son has not got a star on the honor roll, report it to the headquarters, or get to the Red Cross, they will fix it up for you, for Roy will never return.”

“Of Roy I know and was with him when he got killed. I know it is hard to give a good son up. I did not know then that I was to trust in God, but your Roy did. The day he was killed, me and my twin brother and Roy were together. I was writing a letter home. My brother was smoking and Roy was reading the New Testament, and just before that he was telling me that he knew that if he got killed he knows God would take care of him.”

“So they started shelling us. The third shell got us. Me and my brother were wounded. Your Roy was killed dead. He never suffered any. I don’t think he knew what hit him. As soon as I came to, myself, I got up. Roy was lying on his face. I was very weak. I did not know how bad I was hurt then, but it did not make any difference. I always try to help someone else that was in trouble. Me and my brother got up.”

“I turned Roy over, but he was gone. He died happy. There was a smile on his face, and I am sure he faces his Maker pure and spotless. A piece of shrapnel went through his brain and he was not disfigured any, and I know he got a decent burial. For we were not up on the front lines when he got killed, but we were under shell fire all the time; but they gave their lives for a good cause. That will never be forgotten.”

“If you know any of the boys of Company K, of York, when they get back they might be able to tell you about your son. Roy was on the front four months before he got killed, and it is true about the boys not getting anything to eat for days, but the boys stood it like men, and never murmured, and I will say that a man will do anything when it comes to hardships. I know Roy had a good many friends. Would you kindly tell them what I told you. You have my heart’s sympathy. From Roy’s pal.”

Roy McClane was killed near Chateau Thierry. He was initially buried at the American Cemetery, Charly Sur Marne Aisne, France. By the Armistice of November 11, 1918, there were over 76,000 United States soldiers buried in temporary battlefield cemeteries. No remains of fallen WWI soldiers were returned to America until well after the war ended.

The remains of Roy Adam McClane were buried in Mt. Zion Cemetery, in Springettsbury Township, during 1921. The same McClane cemetery plot is the final resting place for Roy’s father and mother; they died in 1947 and 1960, respectively.