The Mausoleum at Prospect Hill Cemetery in York, PA marks its 100th year in 2015; it was dedicated on July 18, 1915. The focal point, as one enters the mausoleum, is this stained-glass window depicting the Resurrection, with Christ emerging from the Tomb. 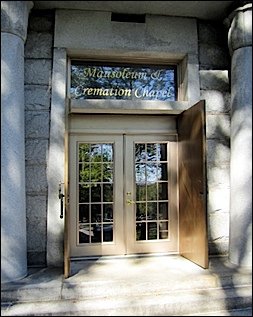 This community mausoleum is located in Section 8 of Prospect Hill Cemetery; that section is at the top of the hill in the north end of the cemetery. The mausoleum is normally locked; thanks to Sharon Glass for providing access and allowing me to photograph the interior.

The entrance to the mausoleum is via these doors. Newspapers during construction noted the mausoleum was based upon an Egyptian Architectural style.

The more recent window above the entrance doors notes “Mausoleum & Cremation Chapel.” Spaces for cremation urns were recently made available in the central Chapel area. 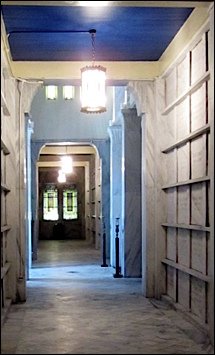 The mausoleum is 131-feet long, 40-feet deep, and 34-feet high. Newspapers reported the American Mausoleum Company from Cleveland used the exact same design for their next community mausoleum, located in Norristown, PA. Rudy Brothers also supplied the stained-glass windows for that mausoleum. I wonder if the Norristown Mausoleum windows are identical to the windows in the York Mausoleum.

This is an interior view, standing in the east wing and looking past the central Chapel area to the end of the west wing. The stained-glass windows at the ends of the two wings also have a Resurrection/Easter theme. There are 419 crypts for entombments; with the majority 6 crypts in height.

Several crypts near the central Chapel area are grouped and gated; typically used by families, who purchased groups of crypts together. Lewis E. Smyser was the first entombment; this occurred July 6, 1915; 12 days before the dedication of the mausoleum.

The following is an exterior view, from the front steps of the mausoleum, looking down the front of the east wing. Complimenting the Egyptian Architectural style, the entrance door is flanked on either side by a Sphinx. 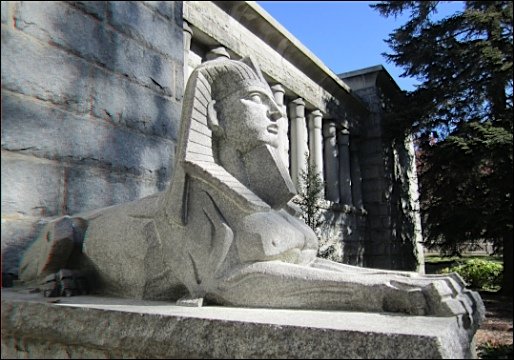 All photos in this post are by S. H. Smith. This is the first of two posts featuring photos of the Mausoleum at Prospect Hill Cemetery. The second post will provide greater details about Rudy Brothers Stained-Glass Windows used in mausoleums.