One reason why people buy historic properties, and restore them, is for the love of the architecture style and construction techniques of yesteryear.  In this photo, Jim Rudisill points out the Flemish Bond brickwork in the front wall of the house at 3103 East Market Street.  This type of brickwork was predominately used in structures built by people of means in the 18th and early 19th Centuries, largely prior to 1830.

Flemish Bond describes a brick wall laid up with alternate headers and stretchers in each course.  Headers in the next course are centered over the stretchers in the course below.  The following illustration, showing this brick structure, is from Dr. Don Linebaugh’s Historic House Research Workshop, which I attended earlier this year.  The evolution of brickwork progressed through having a greater number of courses between headers. 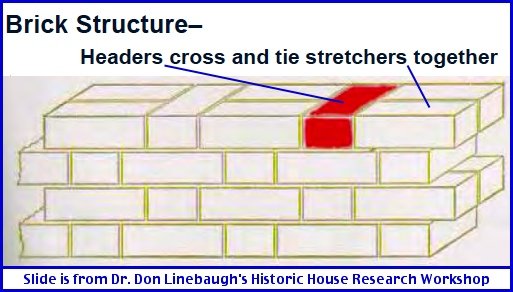 I was invited to join a group doing a walk-through the house at 3103 East Market Street; i.e. located several houses east of the present Springetts Fire Station.  I remember seeing a host of realtor signs at this house over the years; more recently the windows on the first floor were boarded up and lately second floor broken windows were visible from a street-side view.

Outwardly the house looked like it could be returned to the stately home befitting its history.  Inside the home was another story.  There were the more recent broken windows and vandalism, however the house obviously had roof leaks for years; which were ignored by the out-of-town owner, or possibly the realtors never told the owner?  The builder, on the walk-through, thought the amount of internal deterioration will make it cost prohibited to restore.

One of the fastest growing ways to match historically minded buyers with historic properties are through family ties.  This was brought up in a number of talks that I attended last year at the National Genealogical Conference in Las Vegas.

After the ownership history of a property has been researched, it can be made available passively or actively and the doubt of should you reduce your asking price arises for all purchasers. A passive listing on an old house requires people with potential family ties to do a greater amount of searching for a historic property up for sale.

Active listings target each surname in the ownership string.  Ancestry.com has surname-specific Message Boards where family history details can be listed about a historic house.  The information can be listed on the Message Boards even before a property is put up for sale; by including a sentence: Would you like to be contacted about purchasing this property, should it become available?

The research on the 3103 East Market Street house is still ongoing.  Daniel Schriver and Michael Schriver are the father, and then son, who owned the property before 1825; this information is just in case the house was built before Peter deBarth acquired the property in 1825.  The following is the ownership string, with year acquired: