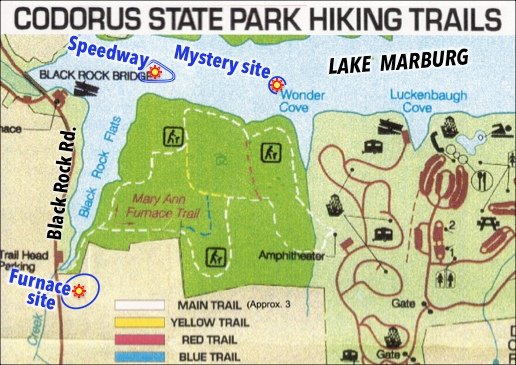 The locations of Mary Ann Furnace, Mary Ann Furnace Speedway and a mystery site, possibly connected to Mary Ann Forge, are examined in this post. All locations are presently within the southwest end of Codorus State Park, about three miles southeast of Hanover. Mary Ann Furnace was the first cold-blast iron furnace west of the Susquehanna River. The furnace started operating 1761-62; three years before the startup of Codorus Furnace, located in Hellam Township. Different Signers of the Declaration of Independence were owners of these two furnaces, which produced munitions during the Revolutionary War.

A comment about Mary Ann Furnace and Forge, following a presentation to the Baltimore County Historical Society, has been on my follow-up research list for years. A question, along the same lines, was raised last October; raising the topic higher in my research to-do list. Last week Mary Ann Furnace Speedway comment was a new one on me. Looking into all three, at one time, made sense.

Dave Grove e-mailed about my recent post Go-Karting at Wagner’s Diner on Lincoln Highway east of Hallam: “You should have mentioned the earliest York County track, dedicated to go-kart racing. I’m sure the Mary Ann Furnace Speedway, near Hanover, was constructed by 1959.”

I discovered the following September 3, 1960, ad; announcing the Grand Opening of Hanover’s First Cross-Country Go-Kart Track: Mary Ann Furnace Speedway. After showing this ad to Dave, he was still certain the track was in place by 1959; his thoughts, maybe it was not officially organized as Mary Ann Furnace Speedway, Inc. until the time of the ad. Nevertheless, 1959 or 1960, does appear to make this the earliest York County track, dedicated to go-kart racing.

The directions, from Hanover, given to the speedway, are: “on Black Rock Road, 3 miles south; look for signs.” Per follow-up e-mails with Dave, his recollections resulted in an approximate placement of the racetrack on a 1954 topographic map; and the location was then transferred to a present aerial view. That site of the Mary Ann Furnace Speedway is presently under Lake Marburg, which was constructed in the late 1960s; to create the Project-70, Codorus State Park.

A newspaper article described Mary Ann Furnace Speedway as a two-tenths mile racetrack containing three hairpin curves. Dave believed the racetrack was so named because the headrace for the furnace was still visible through the speedway site, into an adjacent property. I found that comment a little puzzling, however also relevant to a comment heard years earlier at the Baltimore County Historical Society; such that the “adjacent property” is referred to as the “Mystery site” examined in this post.

A typical eighteenth century cold-blast iron furnace took about 2-tons of iron ore, 1.5-tons of charcoal, and a wheelbarrow full of limestone to produce about 1-ton of pig iron. To attain the high temperatures in the furnace, a bellows was utilized to create the air blast. The bellows was usually powered by a water wheel, where a headrace directs water, from an upstream source, to turn the water wheel. A forge takes the pig iron and refines it into more easily worked, and stronger wrought iron. One of the implements utilized in the forge was a power hammer of about 500-pounds; also usually operated by a water wheel.

A Mary Ann Forge and Furnace historical marker is located near the Black Rock Road Bridge boat launch at the southwest end of Lake Marburg in Codorus State Park. That was the site of the home of the Iron Master for Mary Ann Furnace. Quoting that marker:

“The Mary Ann Forge and Furnace was one half mile east of this marker. Founded 1761-62 by George Ross, Signer of the Declaration of Independence and Mark Bird on Friendship Tract along Furnace Creek, cannon and cannon balls were produced for General Washington’s Continental Army. This site marks the home of the iron master. Erected by Colonel Richard McCalister Chapter Daughters of the American Revolution, Hanover, Pennsylvania, June 26, 1949 and restored by the chapter October 24, 1976.”

For orientation purposes, the following map indicates the location of the topographic map section and aerial photo, used in the illustrations. It is in the southwest part of Codorus State Park; located about 3-miles southeast of Hanover in York Co., PA

The recognized site of Mary Ann Furnace is one-half mile southeast of the marker; which is just south of where the West Branch of the Codorus Creek crosses under Black Rock Road. The giant slag piles from the furnace operations still existed there when the marker was placed in 1949. On nineteenth century maps, the creek in this area is named Furnace Creek. Early in the twentieth century, the Furnace Creek name was shifted to the intersecting waterway further to the west.

Interestingly, one-half mile northeast of the historical marker is the location of the mystery site. Was that the site of Mary Ann Forge? And is that the reason the Iron Master’s home was not at the Furnace, but instead mid-way between the Furnace and the Forge?

As background, Ben Kroutman (sp?) made a comment about Mary Ann Furnace, near Hanover, following a presentation to the Baltimore County Historical Society a few years ago. He seemed to be knowledgeable about the subject, so I wrote it down; to be checked later, but never did. Ben claimed by comparing old maps to old deeds, Mary Ann Furnace was down from the intersection of Furnace Creek and the West Branch of the Codorus Creek and is now covered by Lake Marburg.

A nice article was written, reporting on the dedication of the historical marker in 1949. Of interest was the story behind the naming of the furnace: “The title of the furnace ‘Mary Ann’ is said to have been given by George Ross to combine the names of his wife, Ann Lawler with that of his mother-in-law, Mary Lawler Lancaster.”

In the following illustration, the 1954 Topographic Map is ghosted over a 2003 Aerial Photo of region 3-miles southeast of Hanover, PA; indicating locations of Furnace, Speedway and a Mystery site in West Manheim Township. As of the late 1960s, the Speedway and Mystery sites are under the water of Lake Marburg.

A deed search at the Mystery site was attempted, to see if that site went back to the Furnace owners. Unfortunately that was not successful, since there are gaps of unrecorded deeds. Beach Nichols’ 1876 Atlas of York County, shows the Mystery site is a Blacksmith Shop, operated by M. Wildesig. A review of 1870 and 1880 U.S. Census records put the actual spelling of the owner as Michael Wildasin, a reasonable wealthy Blacksmith. Other records show he was born 23 Sept. 1837 in Hanover, died 12 Feb. 1893, and is buried in Marburg, York County, at Dubs Cemetery.

When iron furnaces shut down, occasionally the forge function continued to operate as a blacksmith facility; with the in-place waterwheel powering a bellows for the blacksmith. If the Mystery site was the Mary Ann Forge, that might be why a headrace was still observed, at the Mystery site, at the time the Speedway was built.

I’m hopeful that I’ll again make contact with Ben Kroutman (sp?) to understand his comment: “by comparing old maps to old deeds, Mary Ann Furnace was down from the intersection of Furnace Creek and the West Branch of the Codorus Creek and is now covered by Lake Marburg.” Was Ben actually investigating Mary Ann Forge, instead of Mary Ann Furnace?

We do know the site of Mary Ann Furnace is in the vicinity just south of where the West Branch of the Codorus Creek crosses under Black Rock Road. In the following photo, at that site, James Rummel holds a cannonball made in the Mary Ann Furnace, a Revolutionary War-era forge that was once on the Rummel Farm in West Manheim Township, York County. The Rummel family sold the historic farm to the adjacent Codorus State Park in 2005.