The portrait of William H. Kurtz [1822-1894] appears opposite page 768 in Volume 1 of George Prowell’s 1907 History of York County, PA. Visits to the Library/Archives of the York County History Center and Prospect Hill Cemetery were used to resolve conflicts in the birth year for the W. H. Kurtz, that had the Kurtz Mansion built. I’ve seen either December 5, 1822 or April 9, 1823 presented as his date of birth on the Internet. In actuality, William was born December 5, 1822 and was baptized April 9, 1823. The following George Prowell article has him incorrectly born during 1823. His monument at Prospect Hill Cemetery is inscribed with his birth on December 5, 1822.

The photo of William H. Kurtz in Prowell has a “W. H. Kurtz” signature printed under the portrait. I decided to verify the signature, since Prowell’s History of York County was printed in 1907; 13-years after William died.

The estate files at the York County Archives contain the originals of most Wills; I collected five early “W. H. Kurtz” signatures in York County; including all three with known involvement with the 109 West Market Street site. The signature under the portrait has, by far, the closest match with that of William H. Kurtz [1822-1894]. The most prominent signature characteristic; see how the left side of his H & K almost resembles a big “J”. 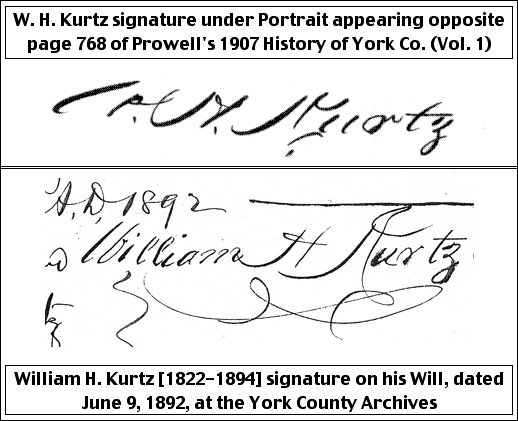 A few other posts where I’ve utilized signatures include:

United States Census records and City Directories confirm this William H. Kurtz [1822-1894], and then his second wife Julia, are living at 109 West Market Street in York, PA, during the late 1800s. George Prowell’s 1907 History of York County, PA contains a nice biography of William H. Kurtz [1822-1894] within the Volume 1 Section on “Manufacturing in the City of York.” Quoting from page 769 of Volume 1:

William H. Kurtz was born in York in 1823 and here he resided until his death in 1894. His early education was acquired at York County Academy, but his extensive knowledge of business has been acquired through his own efforts and in actual practical life. At fourteen years of age he was thrown upon his own resources, and for seven years he was employed as a clerk in a store. He established a malting business, still conducted under his name, in 1845, in which year he became associated with A. Hamilton Nes. The scope of the enterprise was limited at first, but by reliable methods and industry was enlarged until it became the most important of its kind in southern Pennsylvania. The original firm of Kurtz & Nes continued for about twenty years, after which Mr. Kurtz secured sole control of the business, in which he continued until 1872, when he became a member of the firm known as Baugher, Kurtz & Stewart, iron and brass founders, machinists, and manufacturers of turbine water-wheels. There is a connection with this establishment the Codorus Tannery, which was at that time one of the most extensive industries of its kind in Pennsylvania. However, Mr. Kurtz continued to be active in connection with the supervision of the malting business until his death. The present style of W. H. Kurtz & Son was adopted in 1855, when Mr. Kurtz’s son, Charles became identified with the business, which he still carries on.

The marriage of Mr. William H. Kurtz with Miss Mary Baugher was solemnized August 17, 1856. To this union were born three children: Charles, Julia and Mary, the last named dying in infancy. Mrs. Kurtz died in 1861, and, five years later, Mr. Kurtz was married to Miss Julia A. Baugher, a sister of this former wife, and daughter of Frederick Baugher, who was one of the leading citizens of York. Mr. Kurtz was enterprising in business, liberal in all affairs of true worth and merit, and ranks as one of York County’s most valued citizens. He was a member of St. Paul’s Lutheran Church.

New grain was soaked in water on the floors of the malting houses, allowing the grain to sprout. In simple terms, the sprouts were then dried in kilns to stop growth. W. H. Kurtz & Son sold their malt product to beer breweries and food processing plants all over the South Central Pennsylvania area.