Made in YORK, Pullman Automatic Ventilators; How they Worked

I promoted putting more historical pieces in family history books while attending the 4-day National Genealogical Society 2013 Family History Conference in Las Vegas.  I told attendees to checkout YorksPast for a series on how to research the place of business where an ancestor worked.  This is part 4, the other posts in this series include:

I selected Pullman Ventilators because of local interest.  The Pullman identity ties into my post on Albert P. Broomell, he was responsible for the fabrication of the first motorcar in York, Pennsylvania.  The 1903 six-wheel Pullman Motor Car however was not the first Pullman named product in York; those honors go to products of The Pullman Automatic Ventilator Company.

In part 1, I discovered that the trade publication The Iron Age, issue of April 20, 1922, noted that (my distant relative) Walter B. Gilbert & Co., York, Pa. took title to the plant and business of the Pullman Automatic Ventilator & Mfg. Co.  The construction buyers-guide National Builder, issue of December 1922, lists the address of this company as 201 Roosevelt Ave., York, Pa.

In part 2, I used another trade publication, The Metal Worker, issue of January 10, 1903.  An article in that issue provided evidence that The Pullman Automatic Ventilator Company in York was a well-established company by January 10, 1903; making it easy to conclude, at the very least, they were in business during 1902 in York, PA.

In part 3, I revealed how the Pullman name of the ventilator company originated with Charles Lewis Pullman, the younger brother of the principal developer of the Pullman Palace Railroad Cars; George M. Pullman.

The following illustration is from a Walter B. Gilbert & Company product catalog.  This is a 1922 catalog, i.e. from shortly after Walter B. Gilbert acquired the Pullman Automatic Ventilator Company.  The catalog is in the Archives of the York County Heritage Trust.

We can thus say Spinks’ ventilators are probably the earliest design, however this design was still being produced in 1922.  I’m presently researching nameplate variations; to date when Spinks’ Model “A” Ventilators were more precisely produced. 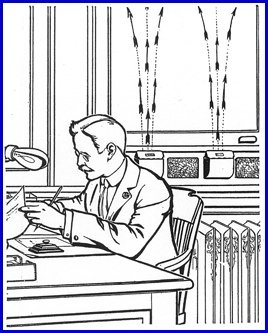 The following illustrations show how the Pullman System of Natural Ventilation worked.  The illustrations are for buildings, however the same system was also used in Railroad Cars.

This illustration shows how the Model “A” Ventilators are installed in the window casing.  Spinks’ photo and the upper view of Model “A” in the catalog are interior views showing the air delivery diffusion boxes inside the building or railcar.

The lower view of Model “A” in the catalog is the exterior view showing the air inlet hoods.  These hoods contain the patented automatic adjustable valve, which admits the air under perfect regulated control.  This is accomplished via a pivoted valve in the hood; which closes against a strong wind, causing the air to enter the low-pressure side, thus preventing draughts. 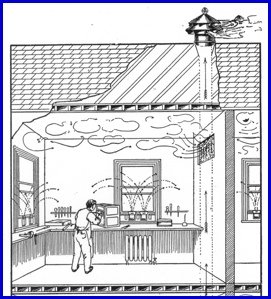 This illustration shows the air entering the room via the window Pullman Automatic Ventilators.  The air ascends part way to the ceiling, where it gradually diffuses down to the breathing line.  The foul air finds exit through properly spaced exhaust outlets.

The exhaust registers are connected via ducts running to the roof.  A Pullman Ventilating Cowl is surmounted on the roof duct to expel foul air into the atmosphere.  The cowl naturally always pulls air from the building; with the patented automatic adjustable valve in the inlet hoods of the window units admitting the air under perfect regulated control.  The whole system operates automatically without motors or control wiring.

Check back in a week or two for the next update on my research into The Pullman Automatic Ventilator Company of York, Pennsylvania.