In 1992, York International Corporation built USA Luge a state-of-the-art refrigerated indoor training facility in Lake Placid, New York. The February 1998 issue of Popular Science, focusing on the science of the Olympics, discussed the rise of the USA Luge Team in world competitions. Quoting from page 73:

The U. S. [Luge] team’s secret weapon is its training facility, the York International Luge Training Complex in Lake Placid, New York. The complex is a refrigerated building housing three start tracks that lets athletes hone their skills year-round on what is the most critical part of the race. Losing one-tenth of a second at the start can translate into a three-tenths of a second loss at the finish. The practice center is the only one of its kind in North America and one of only four in the world.

Congratulations to York County’s Summer Britcher for achieving her first career luge World Cup victory this weekend; on December 11, 2015. Britcher, from Glen Rock, PA, is a luge veteran at only 21-year-old; previously competing in the 2014 Olympics. She celebrated her first World Cup win by claiming her second victory the following night in capturing the Sprint World Cup. The two wins propelled Summer to the top of the luge World Cup’s overall standings. Britcher will be wearing the yellow World Cup Leader’s vest in next weekends luge World Cup events in Calgary, Canada.

The 1998 comments in Popular Science likely sprung from newspaper articles appearing in 1997. One such article appeared in the Lake Placid News on July 25, 1997 about the High-Tech Home of USA Luge:

A new potential sponsor came to USA Luge with an idea. York International, a company which provides heating, ventilation and refrigeration technology, proposed to build USA Luge a state-of-the-art refrigerated indoor training facility. York had previously designed and built the track at Calgary and later the track at Lillehammer for the 1988 and 1994 Olympic Games.

So on October 16, 1992, the US Luge Association formally opened the $1.1 million dollar York International Luge Training Complex in Lake Placid. The indoor training facility, one of only four of its kind in the world, (the others being in Italy, Germany, and Latvia), has three indoor starting ramps, simulating the inclines of the starts used in international competition.

The indoor track combines the indoor starting ramps with cameras and advanced video systems, all of which help lead to an improved start performance. Since luge races are timed to one-thousandth of a second intervals, the start is where most races are won and lost. With the York facility, the USA Luge squad can work on start technique year-round, a necessity in the high-tech world of luge racing.

York International had a long history of supporting the Olympics, both the Winter and Summer Games, since the 1960 Winter Games in Squaw Valley, California. This has been through sponsorship of USA Teams and donation and/or supplying equipment. For example in the 1992 Olympic Winter Games in Albertville, France, York International supplied all the automated snowmaking equipment for the skiing venues, and the refrigeration systems for the ice skating and ice hockey arenas. 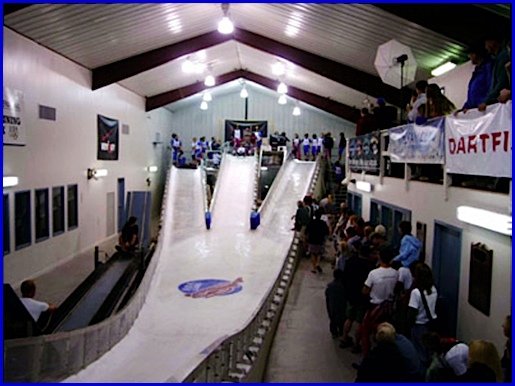 This is a recent interior view of the USA Luge Training Complex in Lake Placid, New York. The photo was from the United States Luge Association—Official Site; in 2013.  Click on this LINK for a Full View of the illustrations in this post; since the ydr.com site will occasionally cut off important details in the cropping of illustrations.  Since the York International Luge Training Complex was built in 1992, North American now has a second indoor luge training facility; in Calgary, Canada.

In the York complex, the ice on the start ramps and track stays frozen, consistently simulating competition conditions, via ammonia-chilled glycol solution that runs through strategically placed piping underneath the ramps and track. Additionally the track area is precisely controlled for both temperature and humidity to simulate competition environmental conditions. Thus providing the USA Luge athletes a state-of-the-art facility to train year-round on improving their start techniques.

If you are ever in Lake Placid, as recently as two years ago, they give a free guided-tour every weekday at 2 p.m. The complex is located at 35 Church Street, Lake Placid, NY 12946. It is unknown if these tours still occur, because the present USA Luge web site no longer provides such tour details.