Navigating the Codorus via canal locks 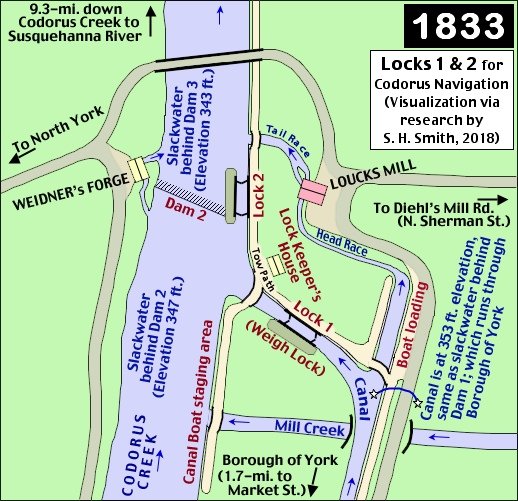 Part five explores how the Codorus Creek was navigated via thirteen strategically placed locks between the Borough of York and the Susquehanna River. This illustration utilizes my research findings to provide a visualization of the area surrounding Locks 1 & 2 of the Codorus Navigation Company. I’ve labeled the illustration with the year the canal was fully complete, i.e. 1833. The waterways are shown blue, the tow paths are brown, and the roads are shown gray even though they were dirt roads in 1833.

Click on this LINK for a yorkblog.com Full View of the three original illustrations in this post if details are cut off in the cropping of illustrations, or if they have been removed from the ydr.com site.

The 1903 map illustration in Part 4 showed the location of Codorus Navigation’s Dam 1. That dam provided an approximately 353-feet slackwater elevation throughout the Codorus Creek within the Borough of York and within the 0.9-mile canal cut to Loucks Mill.

Dam 2, between Loucks Mill and Weidner’s Forge, created a slackwater pool behind it at an elevation of approximately 347-feet. For canal boats to travel between the pools of water at these two elevations, Lock 1 was utilized. That lock could lower, or raise, a canal boat the necessary 6-feet height. Lock 1 was also a weigh lock.

The cost for shipping whole loads of selected items over the Codorus Navigation waterway was per ton. For example, the charge to ship coal was 30-cents per ton. Metal goods, such as castings were shipped at 50-cents per ton. Once a year, empty canal boats were weighed in Lock 1 to get a certified empty weight.

If a canal boat came through Lock 1, which required its weight to determine its cost for traveling over the Codorus Canal, when the boat is in the lock, enough of the water was drained from the lock to allow the boat to gently rest on large oak scale timbers in the floor of the lock. The lockmaster then subtracted the previously measured empty boat weight to obtain the weight of the shipped cargo.

Next week, in Part 6, I’ll explore the site of Dam 3 and Lock 3 on the Codorus Navigation waterway. The slackwater pool, at an elevation of 343-feet, behind Dam 3 extends upstream to the base of Dam 2. Lock 2, in the 1833 illustration, is required to lower, or raise, a canal boat the necessary 4-feet height; i.e. 347-feet minus 343-feet.

The following April 23, 1938 historic aerial photo shows the same area as my 1833 illustration. Loucks Mill operators are again planting in their meadow, where the canal locks had been located. Grant Voaden determined that the last run of Loucks Mill by water power was in 1928. In this 1938 aerial photo, ten years later, the vegetation still outlines the location of the head race and a part of the canal cut, which continued to feed the head race; long after the canal no longer operated. 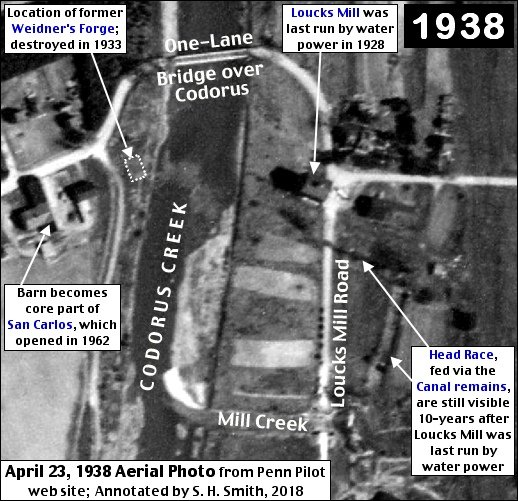 The following 2015 Google birds eye aerial photo shows the same area as the previous illustrations. Note the Codorus Creek flood control differences between the 1938 and 2015 aerial photos. The Army Corps of Engineers did not widen, construct dikes and provide creek bank protection in this area until the 1940s. Today, the support positions are still visible from the One-Lane Bridge, known as Shiverin Liz, which was utilized as the sole way to cross the Codorus at this location until 1948. 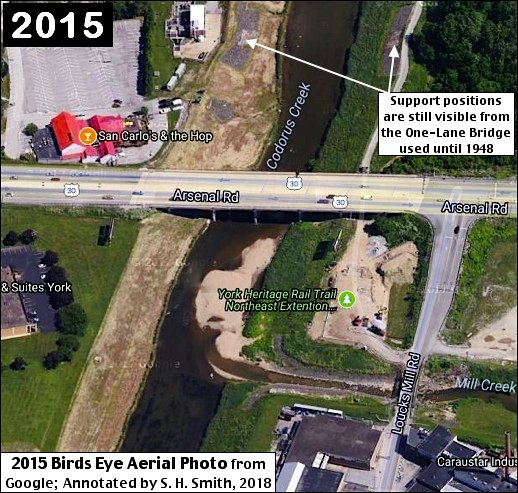