George Figdore and Franklin Minnich equipped with lanterns and ropes, explored Loucks’ Cavern in October 1915 and were able to proceed farther than any of the previous exploring parties. They made their way through the various chambers for a distance of 580-feet. This is the part 2 follow-up post; to part 1 post of last week, 580-ft Cavern discovered in the summer of 1915.

Figdore and Minnich observed that the stalactites became more beautiful and more fantastical in their formations the farther they advanced into the interior. Further living up to the York Daily newspaper headline “FIND MINIATURE LURAY” upon the initial discovery of the cavern during the summer of 1915; and hence another corresponding illustrative photo of Luray Caverns in Virginia.

Over the weekend I’ve exchanged several E-mails with Jeri Jones; quoting Jeri, “I have not heard that story but that is what makes such a job as a geologist interesting.” He spent most of an afternoon investigating hints in last week’s newspaper article; resulting in several clues that may be close to pinpointing the location of Loucks’ Cavern. Jeri Jones is going to make contacts to check out the clues and I’m going to do some additional deed and map searching; hopefully with something to report soon on the location.

Exploration of Loucks’ Cavern to a distance of 580-feet

An article in the October 14, 1915, issue of the York Daily provided details on the further exploration of Loucks’ Cavern east of York, PA. This copy of the first paragraph of the article is followed by the text of the whole article. 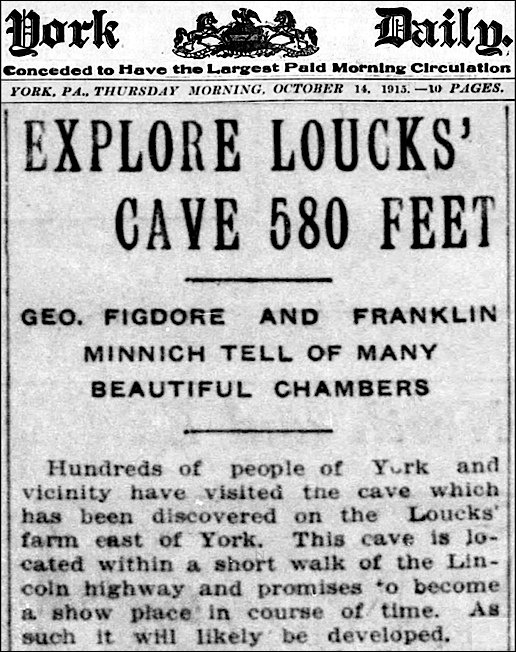 Geo. Figdore and Franklin Minnich Tell Of Many Beautiful Chambers

Hundreds of people of York and vicinity have visited the cave which has been discovered on the Loucks’ farm east of York. This cave is located within a short walk of the Lincoln highway and promises to become a show place in course of time. As such it will likely be developed.

Recent explorations of the cave prove it to be of greater extent and beauty than was first thought when Benjamin Minnich came upon one of the chambers while prospecting for limestone several weeks ago. George Figdore and Franklin Minnich equipped with lanterns and ropes, explored the cave last Saturday and were able to proceed farther than any of the previous exploring parties. They made their way through the various chambers for a distance of 580 feet and they declare that it would have been possible for them to have gone to a greater distance had they had equipped for further exploration.

They were able to inspect many large and beautiful chambers. They observed that the stalactites became more beautiful and more fantastical in their formations the farther they advanced into the interior. It also was found that the cave, after they had proceeded 200 feet, is free of accumulations of water. There was no more moisture than that found in the average cellar and some of the chambers are as dry as rooms above ground.

The extent of the cave is such that in the course of their investigations the two men became separated and some time elapsed before they again met though they could hear each others shouts. The stalagmite, which resembles a castle and is located 200 feet from the entrance, had hitherto been regarded as the most curious formation in the cave. It is said to be surpassed by many of the formations found by the explorers at a greater distance in the interior. Both Figdore and Minnich are enthusiastic in their descriptions of the underground wonders they beheld.

Figdore intends to make further explorations. It is his opinion that he will be able to penetrate the caverns to a far greater depth than 580 feet. He will lead a well equipped party and as the party proceeds they will make accurate measurements.

E. W. Loucks, on whose farm the cave is located, has had visits from a number of men of scientific knowledge who are interested in the clay deposits on the farm. Some of the clays found near the mouth of the cave are considered to be rich in aluminum.

I’ve discovered a few additional newspaper articles about Loucks’ Cavern, and along with the first two articles the following clues can be summarized as to where the cavern was located:

A Gettysburg newspaper, Adams County News, reported on November 2, 1915, with the headline, “Jawbone of a Wolf Found in Loucks’ Cave Near York.” Quoting from that article: “More than 400 people visited the cave Sunday.” “It is the intention of Edwin W. Loucks to place some of the mineral specimens from the cave on exhibition.”

Items from Loucks’ Cavern were initially stored in a barn along the Lincoln Highway (i.e. present day Route 462). What happened to those items? Does anybody remember an old barn along the Lincoln Highway that contained pieces of stalactites, stalagmites, animal bones and rock samples? If any of my readers know anything about the location or information about Loucks’ Cavern, please contact me at stephen.smith4@comcast.net