Looking Back on the 100th Anniversary Commemoration of The Battle of Wrightsville; Part 1

During the several days before the Centennial events at Gettysburg, several Pennsylvania communities which were involved in the 1863 Confederate invasion will conduct commemorations.  These include Columbia-Wrightsville, Hanover, Carlisle, Camp Hill, and Waynesboro.

This is the first part looking back at the 100th Anniversary Commemoration of The Battle of Wrightsville.  These photos from the June 29th 1963 issue of The Gazette and Daily are from the battle re-enactment staged in Wrightsville on the evening of June 28th; exactly 100 years-to-the-date after the actual battle occurred.  The Gazette and Daily caption on the photos:

Union forces, at left, fire at the Confederate invaders in a last-ditch effort to prevent the South from reaching the bridge crossing the Susquehanna river.  Minutes later, Yankee troops retreated to the bridge for the scene at right where simulated burning of the span to halt Confederate advance took place.  An estimated 8,000 persons jammed Hellam and Front streets to witness last night’s skirmish and bridge burning in commemoration of Civil War history written in the community 100 years ago.  The centennial celebration continues with a parade at 2 p.m. today.

The battle re-enactment on June 28th 1963 was staged with a large number of units from various States equipped with Civil War uniforms and weapons.  The re-enactment was the centerpiece of 5-days of centennial commemorations of the Battle of Wrightsville.

A play about Wrightsville and the burning of the bridge during the Confederate invasion, “A Noise of Archers,” was presented June 26th through 29th.  The Centennial Parade in Wrightsville on June 29th was witnessed by 10,000; followed by dancing at Constitution Square.

The centennial activities in Wrightsville culminated with an outdoor community worship service the evening of June 30th.  The guest speaker was Rev. Dr. Jacob M. Myers, professor of Old Testament at the Lutheran Theological seminary, Gettysburg.  His sermon subject was “This Nation Under God.”

2013 is the 150th ANNIVERSARY OF BURNING OF THE BRIDGE

In future posts, I’ll continue to look back at the 100th Anniversary in 1963, plus I’ll include events planned for this year’s 150th.  A nice introduction to the Battle of Wrightsville is achieved with a visit to The Burning of the Bridge Diorama; it opens this Sunday, for the season. 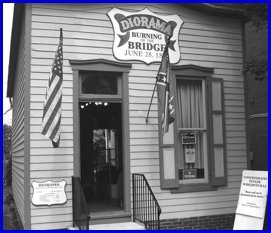 The Burning of the Bridge Diorama, at 124 Hellam Street in Wrightsville, presents a nice visual program explaining the Battle of Wrightsville and the Burning of the Bridge.  The Diorama is open Sundays from 1:00 to 4:00 p.m., during April 14th through October 27th.  Why not go during a Sunday this spring and avoid the summer crowds.  Click here for the Diorama web site.

While at the Diorama, purchase a copy of “Farthest East, Wrightsville, Pennsylvania;” to help support the Diorama.  This 36-page booklet was published for the 100th Anniversary Commemoration of The Battle of Wrightsville in 1963; quoting the final two paragraphs from the introduction:

Today, as the haze of time mellows the events of long ago, Wrightsville pauses to recall, without bitterness, the day when Confederate soldiers took possession of the town and the day when stunned citizens saw the important link with their neighboring town of Columbia destroyed by fire.

So on these pages are chronicled the happenings of the days before, the day of invasion and the day afterward, that this generation, and those to come, may know that Wrightsville has its place in the history of the Great Rebellion.