Cliff Satterthwaite created this artwork of the last balloon ascension of Dr. James A. Dale, a wealthy Drug Store owner in York, Pa. The artwork was created in 1970 from an old photo in the collections of the York County Heritage Trust. As far a number of flights, Dr. Dale was the most prolific local aeronaut; his flights in York spanned the years 1869 through 1886. His first flight from Centre Square had him landing near Linglestown, Dauphin County, after being in the air one hour and thirteen minutes.

The artwork shows a southeast looking view of Centre Square in York, Pa. during 1886. One of the two market sheds that sat in the middle of the square are seen in the lower left; they would be torn down less than a year later, in 1887. The tall building in the upper left is the Hartman Building; on the southeast corner of the square. The building housing the grocery store of Matthew Tyler is at the right; on the southwest corner of the square. Dr. Dale would be instrumental in getting the massive Colonial Hotel built on this southwest corner, years later. South George Street heads south between the Hartman and Matthew Tyler buildings.

James A. Dale was born in Shippensburg, Pa., during 1845. After an education in the common schools of Cumberland County, he apprenticed at the drug store of J. B. Herring in Mechanicsburg. He served in Company F, First Pennsylvania Volunteers, during the Civil War and fought in the Battle of Antietam. In 1863, he went to York and formed a partnership with Dr. Jacob Hart; their drug store taking the name of Dale & Hart. The following image is their logo from a bill of sale letterhead dated January 16, 1873.

Dale & Hart were wholesale and retail Druggists. Besides their retail Drug Store, they manufactured many medicines and other products, which they distributed around the area. Dr. Dale was very successful as a druggist and was also involved in numerous other enterprises in York; he accumulated a fortune. In his younger years he was an ardent adventurer, most notably taking up the balloon hobby; becoming an aeronaut. He organized many rail excursions throughout the Eastern United States. Later in life he was a world traveler; with 11 trips to European countries plus traveling to the Holy Lands. Dr. Dale never married and gave liberally to charitable causes. Dr. James A. Dale died in 1921 and is buried in his own mausoleum in Prospect Hill Cemetery.

Continue reading for details of the last balloon flight of Dr. James A. Dale.

The following photo is of the last balloon ascension of Dr. James A. Dale. It is the 1886 photo that Cliff Satterthwaite based his artwork upon. The photo also appeared in the April 13, 1940, issue of The Gazette and Daily; an article that noted:

The balloon is still in existence today, resting in the basement of the Historical Building [In 1940, this was the Billmeyer House at 225 East Market Street. In 2015, the basket is still in the collections of the York County Heritage Trust.]. It strongly resembles a pile of clothes in a wash basket. Its former passengers must have been brave, for the basket was small, holding only two or three people, and its sides are shallow.

The June 9, 1886 issue of The York Daily announced the balloon ascension:

Next Monday, Whit-Monday, [June 14, 1886] the grand balloon ascension from Centre Square by Dr. J. A. Dale, who will be accompanied by a York lady, will take place. The inflation of the balloon will commence at 10 o’clock in the morning. The balloon is the largest ever constructed in this country, and was made for the late Prof. John Wise, who contemplated crossing the Atlantic Ocean in it.

The details about this historic balloon appeared in the June 12, 1886 issue of The York Daily, when it arrived in town; specifically that it “weighs 550 pounds, and will hold thirty thousand feet of gas.” Rain on the day of the planned ascension, caused a delay; such that it was about 5 o’clock before the balloon was filled with gas. The commentary continues from the June 15, 1886, issue of The York Daily:

Even then it became evident that the balloon would not be able to carry more than one person, and probably not even one. The basket was finally attached and Dr. Dale entered. The balloon rolled from one side to the other and hardly seemed able to carry its own weight. During this time, with Dr. Dale in the basket, the greatest excitement prevailed, some calling on him and insisting that he should abandon the hazardous undertaking, while others urged him to proceed.

The Doctor was determined to make the ascent if it was possible and the balloon was at last let go, but after ascending about eight feet it came to the ground. Finding it impossible to go up, the basket was taken off and the balloon anchored. The crowd was then informed that should the gas not escape and the weather permit, the ascension will be made at ten o’clock this morning [June 15, 1886]. The crowd then turned away, after standing nearly all day, sadly disappointed.

The failure is attributed to the damp and heavy atmosphere and also to the naphtha gas, which although good for illuminating purposes is not the proper kind for inflating balloons. 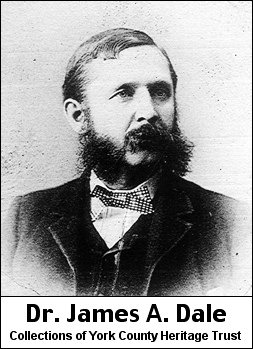 The conditions did not improve the second day, and this balloon ascension was canceled. Under prior ownership, this massive balloon had previously carried three persons on a flight, be it under perfect weather conditions. Dr. Dale did not want to disappoint the crowds until he had a better certainty for success under a wider range of weather conditions. Had he used Hydrogen gas, as the early aeronauts had used, the balloon would have had enough lift. Unfortunately Hydrogen had fallen out of favor with aeronauts due to some spectacular accidents. Dr. Dale noted another attempt would be made, if a difference gas could be manufactured especially for the purpose of flying this balloon. Another flight was never made. The eight feet that Dr. Dale got this massive balloon into the air became his last flight.

In 1919, on the 50th Anniversary of his first balloon ascension [in 1869] from Centre Square in York, Dr. James A. Dale took his first airplane ride when the Stinson flyers were in York. Dr. Dale declared, “Riding in an airplane is not as pleasant as riding in a balloon.”