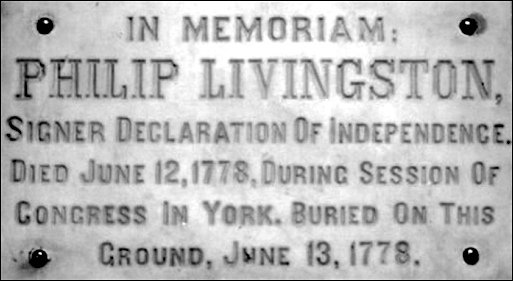 Marble slab marking the original burial location of Philip Livingston, Signer of the Declaration of Independence. For many years, this marker was displayed on the east wall of Woolworth’s in the first block of West Market Street in York, PA. (Pinterest)
Posted by Stephen H. SmithDecember 7, 2018 All Posts, Memorials, Pennsylvania, Various Locations, York County

Livingston monuments in York before the Woolworth’s marker

When researching George Bush’s relation to Philip Livingston, I was curious about Stephen Van Rensselaer’s age, when he placed that monument in York, honoring the memory of his grandfather.

Philip Livingston was born in Albany, New York, during 1716. His daughter Catherine was born in 1745. Catherine’s son Stephen Van Rensselaer III was born in 1764; so Stephen was 14-years old when his grandfather Philip died, on June 12, 1778, while attending the Congress of the United States at Yorktown, Pennsylvania.

Philip’s grandson Stephen Van Rensselaer III died during 1839; two decades prior to the establishment of Prospect Hill Cemetery, so he did not erect the present large monument. That cemetery was chartered in 1849; with the first burials during 1851.

An article in The York Daily, during 1896, recalls the locations of “The Old Monuments in the German Reformed Church Yard.” The Hon. Philip Livingston monument was between the monuments of Rev. John Cares and Rev. Lewis Mayer. “The remains of these men, as well as their monuments, were removed to the Prospect Hill Cemetery many years ago.” The removal of the remains of these three, and all the others buried in the Church Yard, happened because a church addition required the use of the Church Yard.

An article in The Baltimore Sun, during 1858, notes Philip Livingston remains were recently removed to Prospect Hill Cemetery, where an appropriate monument marks his final resting place. The removal of the remains happened in January 1856, per page 323 of George Prowell’s 1907 History of York County, PA (Volume 1).

Who was responsible for the “appropriate monument?” I discovered an early sketch of the Philip Livingston monument in the Digital Collections of the University of Pittsburgh.

This etching is the work of noted illustrator William Wagner of York, PA. William Wagner lived from 1800 until 1869. I’ve zoomed into the lower right of the sketch, where he signs the work.

Why do I think this is an early sketch, as opposed to William Wagner simply drawing the final monument? The sketch does not include the upper column holding the decorative urn. For comparison, see the following photos of the Philip Livingston monument in Prospect Hill Cemetery. The first photo, from the collection of the York County History Center, was taken in 1927. The second photo is a recent photo.

The attractive iron railing surrounding the Prospect Hill Cemetery monument to Philip Livingston is noted in newspaper articles in the 1800s. In family history books, I’ve seen accounts of these types of iron railing going into WWII scrap drives. I wonder if that was the case for the pictured iron railing, because there is no iron railing in a 1943 photo of the site; also from the collection of the York County History Center. A recent photo of the site follows.

What about the Marble Woolworth’s Marker?

An article in The York Daily during 1898 describes the efforts: “The committee in charge of the Philip Livingston Memorial Tablet met last evening at the residence of the Secretary, H. W. Dietz, North Pine Street, with the following additional members present: Miss Carrie Robinson, Miss Mattie A. Dietz, Miss Nettie O. Brubaker, Miss Minnie Wire and the chairman, W. C. Kraber. The marble slab bearing the inscription is done. Mr. George Bollinger, the sign artist, has painted the engraved letters and Mr. Arthur Peters was awarded the contract to make the frame. The committee are doing all they can to complete the work at an early date.”

After the congregation moved to a larger sanctuary at 100 Lafayette Street in York, the old church was one of the structures demolished to build Woolworth’s in the first block of West Market Street in 1913.

The marble slab remained on the east wall of Woolworth’s until the department store went out of business in 1997. After which Zion United Church of Christ, the successor to Zion Reformed Church, removed the marker and placed it in their church for safekeeping, where it can still be seen today.