An obituary of Gardner Cobb appeared in The New York Times on April 7, 1908. The obituary was concise, while emphasizing a connection to Abraham Lincoln.

Gardner Cobb, one of the oldest railroad engineers in the country, died in Shamokin, Penn., last night. He ran President Lincoln’s funeral train a part of the way from Washington to Illinois.

The same day, The York Daily in York, PA, contained additional details in their obituary of Gardiner Cobb.

During the Civil War he was in charge of a number of ammunition and supply trains, and ran the locomotive which drew the funeral train of the martyred President Lincoln from Baltimore to Harrisburg.

The sketch of Gardner Cobb is from his 1903 retirement from the Reading Railroad. At the time Engineer Cobb was 77-years old and was said to be the oldest passenger locomotive engineer in the country.

Gardner Cobb was born during June of 1826. In 1843, at 17-years-old, he was trained as an engineer on the Baltimore & Ohio Railroad. For sixty years he served as an engineer for several railroads. He never had an accident nor was he ever injured on the job.

From 1856 to 1869, Gardner Cobb was an engineer on the Northern Central Railway; which was technically part of the Pennsylvania Railroad System after 1860. Engineer Cobb not only had the duty of running President Lincoln’s funeral train through York County, he was the engineer on the train that was to have brought Abraham Lincoln through York County prior to Lincoln’s first inauguration.

During the Civil War, Gardner Cobb had charge of all extra trains out of Baltimore; this coupled with Engineer Cobb running Lincoln scheduled trains through York County in 1861 and 1865, increases the possibility that Cobb ran the locomotive between Baltimore and Hanover Junction during Abraham Lincoln’s journey through York County so President Lincoln could attend the dedication of the Soldier’s Cemetery in Gettysburg during November of 1863.

An article in The York Daily on July 8, 1903, contained an interview with Gardner Cobb upon his retirement; reflecting back on the time he was an Engineer for the Northern Central Railway. He talked about an event prior to Lincoln’s first inauguration and of his most exciting experience during the Civil War.

Engineer Cobb one morning received orders to bring a train of three cars and an engine from Harrisburg to Baltimore the next day. The train was to be occupied by the Lincoln party. He was at Harrisburg the same night and saw Lincoln, Alexander K. McClure and other notables walking about the main streets. Early the next day Cobb ran his engine up to the special train, a huge crowd surrounded it, shouting and cheering for Lincoln.

At York the train was held on waiting orders and Cobb went into the cars to greet the President, when, to Cobb’s surprise, he learned that Lincoln the night previous had been taken through Philadelphia to Washington and was sworn in as President of the United States. When Cobb’s train reached Baltimore, the station was in the hands of a mob antagonistic to Lincoln. Some of the angry men spat on Lincoln’s children before the family could leave the city for Washington. Cobb says that had Lincoln been on the train going into Baltimore the mob would surely have killed him.

When the war broke out Cobb and Conductor Samuel Blair, now superintendent of the Pennsylvania’s Bald Eagle Valley Division, had charge of all extra trains out of Baltimore and they carried many regiments of Union troops to the front.

Mr. Cobb says one of the most exciting experiences was taking an ammunition car toward Gettysburg during the second day’s fight. He was in Baltimore when a rush message from Hanover Junction stated a car full of ammunition had accidentally passed through to Baltimore, when it should have been side tracked at the junction and hurried to Gettysburg, as the Union troops needed it. Cobb coupled one of the speediest locomotives in the round house to the car, and at a rate of more than a mile a minute, ran the forty-five miles to Hanover Junction.

Gardner and Annie Cobb had four children that lived to adulthood. Their daughters: Annie, Minnie and Eva; were married as Mrs. Annie Strickland, Mrs. John Campton and Mrs. George Wallace, respectively. Their son was Gilbert Hanover Cobb, who had a 58-year career as a freight agent for the railroads and steamship lines. Gardner Arnold Cobb is buried in Saint Edwards Cemetery in Coal Township, Northumberland County, PA. This is his gravestone from Find A Grave. 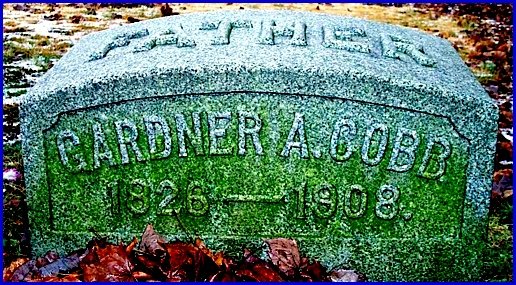 This is the first post in a series on Lincoln’s Engineer and the Lincoln Funeral Train. Related posts include: