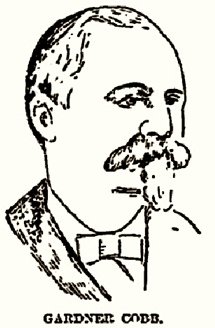 Gardner Cobb was the Engineer who ran the Northern Central locomotive on the train taking the Abraham Lincoln party from Harrisburg, PA, to Baltimore in the next to last leg of the grand Lincoln First Inaugural rail route from Springfield, Illinois to Washington, D.C. The morning of February 22, 1861, Engineer Cobb pulled out of Harrisburg with the Lincoln party and when the train was held on waiting orders in York, PA, Cobb went into the cars to greet the President-elect.

To Engineer Cobb’s surprise, he learned one was missing from the Lincoln party. Abraham Lincoln had been secretly taken overnight in a roundabout route through Philadelphia to Washington. This still required Abraham Lincoln to journey through the streets of Baltimore between non-connecting rail stations, however it was done in secret, without incident, at 3:00 a.m.

When the train carrying the Lincoln party reached Baltimore, Engineer Cobb recalled the station was in the hands of a mob antagonistic to Lincoln and that some of the angry men spat on Lincoln’s children before the family could leave the city for Washington at Camden Station. Cobb says that had Lincoln been on the train going into Baltimore the mob would surely have killed him. 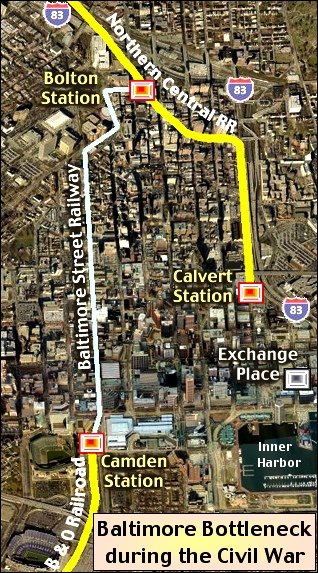 I’ve annotated this Bing.com Bird’s Eye View of Baltimore with what was known as the Baltimore Bottleneck during the Civil War. On February 22, 1861, Engineer Cobb ran the Northern Central train to Calvert Station, where the Lincoln party disembarked. Whereupon they entered horse and carriages to travel to Camden Station, and then proceed, on a B & O Railroad train, to Washington, D.C.

City ordinances forbid railroads to operate in downtown Baltimore. The resulting non-connecting railroads created a travel bottleneck through Baltimore. Most people know that the first shots of the Civil War occurred April 12, 1861, when Confederates fired on Fort Sumter in South Carolina. However the first casualties of the Civil War occurred in the streets of Baltimore a week later, on April 19, as a direct result of the Baltimore Bottleneck.

President Lincoln’s call for volunteers quickly brought the initial northern militia units south to protect Washington, D.C. The key northern rail link into Washington, D.C. was the B & O Railroad; which meant traveling through Baltimore. On April 19, northern militia units, marching on city streets between the non-connecting railroad stations, where confronted by a mob of civilians who began stoning the soldiers. The confrontation escalated until eight in the mob, two soldiers and one bystander were killed.

Railcars could be transferred between the Northern Central and the B & O Railroad, however it was a slow arduous process. Individual railcars could be hauled, via teams of horses, between the different rail stations upon the Baltimore Street Railway tracks.

On April 21, 1865, after traveling from Washington, D.C., the Lincoln Funeral Train arrived in Baltimore, on the B & O Railroad, at Camden Station by 10:00 a.m. A procession, carrying Lincoln’s coffin, moved over city streets to Exchange Place, where the body lay in state. The cover of the coffin was removed for the public to pay their respects to the remains.

While the body of Lincoln lay in state, the two dedicated funeral train railcars, that carried Lincoln’s coffin and the official party, were hauled by teams of horses north upon the Baltimore Street Railway tracks to Bolton Station on the Northern Central. This is where the same Engineer Cobb added these two dedicated cars to the seven cars and locomotive of the Northern Central Railway. The assembled Lincoln Funeral Train backed down to Calvert Station to accept the coffin of Lincoln following the procession from Exchange Place. The funeral train pulled out of Baltimore at 3:10 p.m., slowly traveling through northern Baltimore County and York County on its somber journey to Harrisburg, PA.

Engineer Gardner Cobb was at the controls of the Lincoln Funeral Train during the 84-mile leg of the journey from Baltimore to Harrisburg, PA. The train stopped just north of the Pennsylvania-Maryland State Line in New Freedom, PA, at 5:30 p.m. to take on the delegation headed by Pennsylvania Governor Andrew Curtin. Along the way, people lined the tracks to pay their respects prior to entering York at 6:40 p.m.

York was a scheduled stop for the steam locomotive to take on water. During the stop, town bells rung. A brief memorial service was followed by six ladies from York, placing a large rose wreath on Lincoln’s coffin; followed by Aquilla Howard, a black man, placing a wreath on behalf of the City of York. All the while a brass band from the United States Military Hospital in York played a mournful dirge.

At sunset, the funeral train departed York at 6:50 p.m. and pulled into the Pennsylvania Railroad Station in Harrisburg at 8:35 p.m.; 15-minutes past the scheduled time. Lincoln’s body lay in state overnight in the Hall of the House of Representatives in the State Capitol, thus ending the first day of the April 21st through May 3rd, funeral train odyssey taking the body of Abraham Lincoln back to Springfield, Illinois.

This is the second post in a series on Lincoln’s Engineer and the Lincoln Funeral Train. Related posts include: