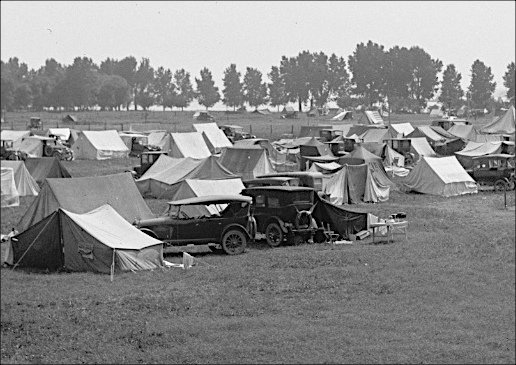 The Big Hand Tourist Camp was a seasonal tent camp for traveling tourists. It was located along the south side of the Lincoln Highway in a field east of Stony Run. It opened in 1925 and was in operation for about five years. (The photo, dated 8/20/1923, is a similar tent style tourist camp from the National Photo Company Collection at the Library of Congress)
Posted by Stephen H. SmithJune 27, 2022August 1, 2022 All Posts, Automobiles, Buildings, Businesses, Pennsylvania, Roads, Springettsbury Township, Talks, Various Locations, York County

The Big Hand Tourist Camp was a seasonal tent camp for traveling tourists. Opening in 1925, it was located along the south side of the Lincoln Highway in a field east of Stony Run. In 1928, the entrance to the camp was one of 26 locations in York County where concrete Lincoln Highway markers were placed by troops of York County Boy Scouts.

The completion of the Lincoln Highway and other Good Roads Movement roads gave way to seasonal tourists taking longer and longer trips. Tourist Camps sprung up to address the need for low cost overnight accommodations. In the 1920s, tent camps were popular, which charged as little as 25-cents per night; if the tourist supplied the tent.

In 1925, Alfred Hubler established one such tent camp along the Lincoln Highway; the Stony Brook Tourist Camp. He soon partnered with Paul & Stuart Strickler, who owned the Stony Brook Garage directly across the highway. The camp name changed to Big Hand Tourist Camp after Hubler left the business; which was about 1926. Alfred Hubler left to establish another tourist camp along the Susquehanna Trail.

The Big Hand Tourist Camp likely received its name from a BIG HAND sign; pointing to the camp entrance.

The Big Hand Tourist Camp was in operation for about five years. The onset of the Great Depression caused a significant drop off in the need for tourist camps. Additionally, the late 1920s, saw the beginning of the shift to small cabins to accommodate tourists.

York Council of Boy Scouts, Troop 17, installed a concrete Lincoln Highway marker at the entrance road to the Big Hand Tourist Camp on September 1, 1928. In terms of present surroundings, that marker would have been near the entrance to the former Turkey Hill store at 3760 East Market Street. That building has been vacant since 2005, after Turkey Hill moved to their new store on Cinema Drive.

It was likely a mutual business boost for the Strickler brothers by having the Tourist Camp just across the Lincoln Highway from their Service Station. In April of 1921, the brothers Paul and Stuart Strickler opened the Stony Brook Garage along the north side of the Lincoln Highway in Stony Brook. The building still stands at 3701 East Market Street; although it has not been utilized as a service station since 1974.

The Big Hand Tourist Camp, the Stony Brook Garage, the grocery store of Mrs. Emma J. Hoke and the meat market of Elmer C. Horne are just a few of the early businesses in Springettsbury Township, whose stories will be shared at the next Springettsbury History Night event on July 13, 2022.

Springettsbury History Night event on July 13, 2022 is in the York Area United Fire and Rescue Meeting Room, located at 50 Commons Drive (rear of building), York, PA 17402, at 7:00 P.M. The presentation will begin with an exploration of mills, and progress through early factories, service stations, stores, inns, taverns, and restaurants. This event will focus on stories of early businesses in Springettsbury Township; i.e. those established prior to 1940.