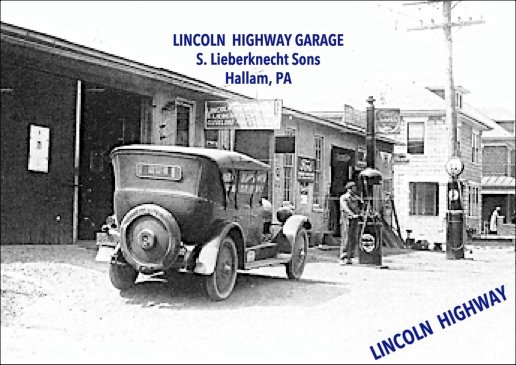 York Council of Boy Scouts, Troop 15, replaced a wood post, with a concrete Lincoln Highway marker, opposite the A. R. Gross Store in Hallam on September 1, 1928; as reported in newspapers and Lincoln Highway Association notes of that time. Research via deeds and newspapers was used to pinpoint where that marker was placed in terms of present surroundings.

The location of the A. R. Gross Store, in Hallam, was pinpointed via researching deeds and newspapers. A York County Deed made on September 2, 1927 (Book 23W, page 655) records the sale of a property in Hallam from Alice Crumling to Alvin R. Gross.

Moving forward in time, the sequence of ownership of that property progresses from Alvin R. Gross, to George Hull, then Ben Sheibley, then Walter Miller, and then Allen Shepp in 1946. Newspaper accounts confirm all these individuals are operating a store in Hallam, which is located on the northeast corner of East Market and North Prospect Streets.

The location of that store is pointed out on an annotated 2019 aerial photo. On September 1, 1928, York Council of Boy Scouts, Troop 15, replaced a wood post, with a concrete Lincoln Highway marker, opposite the A. R. Gross Store. In terms of present surroundings, that marker would be in front of Don’s Cycle at 20 East Market Street.

In 1928, the concrete Lincoln Highway marker was placed along the vacant southeast corner lot at East Market Street and South Prospect Street. That lot was originally part of a larger Wilson Estate and was initially sold off as a separate lot in 1922 to Charles E. Kein. In the next eight years the lot remained undeveloped under three additional owners: Marian A. Hoke, George D. Hoke, and Wilmer Stewart.

In 1930, William E. Sellers acquires the corner lot and places a building upon it, however the type of business is unknown. In 1943, the next owner of the lot is Fred H. Byerley, who opened a Mobile Gas Station at that site in 1944. In 1947, Fred Byerley gains approval to extend the bridge over the tributary of Kreutz Creek into his property for added parking. After that bridge extension is in place, Fred adds a restaurant and billiards hall to his enterprises on the corner lot. The pull-in parking, directly off of the Lincoln Highway, covered the full Lincoln Highway width of the lot; and is likely when the concrete Lincoln Highway marker was removed.

Utilizing the following eastward looking photo, I show the location where the concrete Lincoln Highway marker was installed on September 1, 1928.