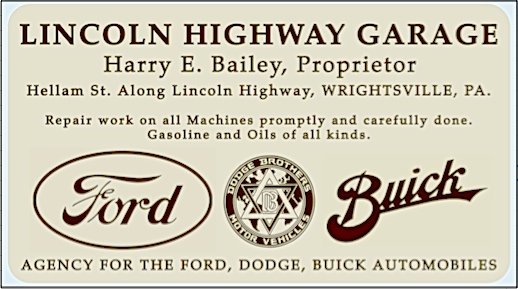 Tom Keller submitted a business card of Harry E. Bailey. Tom asked if I could date the card and wanted to know if the building still stood. I discovered a May 21, 1915 ad in The York Daily, which contains information consistent with that on the business card; thus the card is circa 1915. Both the card and ad note the garage is agency for the Ford, Dodge, and Buick automobiles.

The business directory notes the Lincoln Highway Garage is located on the corner of Hellam Street and Howard Alley, near the Susquehanna Bridge, in Wrightsville, PA. I utilized a 1923 Sanborn Fire Insurance Map, from Penn State Libraries to pinpoint the exact location; the garage is on the southwest corner:

A zoomed-in view reveals details about the garage. The garage is a two-story concrete block structure with 64-feet frontage. The office and stock room front Hellam Street. The first floor garage contains a concrete floor and can accommodate 30 cars. In 1923, the second floor is leased to a cigar factory.

The reason this garage no longer stands is explained in this Gazette and Daily article of September 21, 1929: “Harry E. Bailey, proprietor of the Lincoln Highway Garage, has moved into his new building on Hellam Street near Fourth, which was recently completed by contractor Frank H. Leibhart. The building is modern in every respect, and occupies the site that was formerly the home of Charles W. Shultz. The old building which he vacated this week is now being demolished to make way for the approaches of the new bridge.” That new bridge in 1929 was the concrete arch bridge, which opened in 1930, and is today the Route 462 bridge between Columbia and Wrightsville.

Harry E. Bailey continued to operate the Lincoln Highway Garage in Wrightsville; now on the north side of Hellam Street, about mid-way between Fourth and Fifth Streets. About 1934, when his younger brother Barnum E. Bailey becomes partners in the business; the business becomes Bailey Bros. Garage and soon just Bailey’s Garage. Bailey’s Garage, i.e. the second location of the Lincoln Highway Garage in Wrightsville, no longer stands.