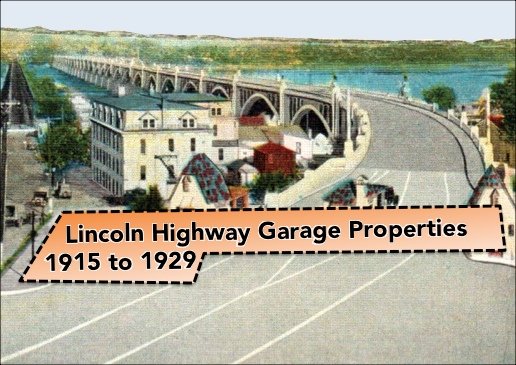 Nick Lentz noted that when his grandparents dated they often went to the Imperial Theatre in Wrightsville. Those dates always included shared dreams of buying a car as they walked by an enticing car lot at the theatre entrance. That car lot turned out to be shrewdly located by the common owner of the Theatre and the Lincoln Highway Garage; which was an agency for Ford, Dodge and Buick automobiles.

Nick continued, “I discovered the 1923 diagram in your article about the Lincoln Highway Garage in Wrightsville. It perfectly shows what grandpa described, with the car lot next to the Lincoln Highway Garage and in front of the Moving Pictures Theatre. I sort of remember that theatre had a connection to the garage next door, is that something you normally look into?”

Old newspaper articles, via Newspapers.com, provided the connection between Wrightsville’s Lincoln Highway Garage and the Imperial Theatre next door. The York Dispatch of April 16, 1921 reported, “Harry E. Bailey, proprietor of the Lincoln Highway Garage, is transferring his fixtures to the new building which he recently constructed. Mr. Bailey will remodel the old building to be used for a hall and a picture show.”

The delivery of the custom seats, that Harry Bailey wanted for his theatre, were constantly delayed, such that he allowed small civic and church groups to utilize the building’s stage prior to the Imperial Theatre official opening. The first such use occurred on July 30, 1921, by young people of Trinity Lutheran Church to present the play “For the Old Flag.”

The Gazette and Daily of September 2, 1921 reported, “Harry Bailey, proprietor of the new Imperial Theatre, received the new chairs and has a force of men engaged installing them, so as to be in readiness for the opening on Saturday evening [September 3, 1921]. The state inspector was here to inspect the new building this week and reported it to be one of the best designed and the most fire proof building in the state for a picture show house.”

The Gazette and Daily of September 7, 1921 reported, under a Wrightsville Header, “The Imperial Theatre, which has the largest seating capacity of any similar building at this place, was unable to accommodate the large crowd which endeavored to see the moving pictures which were shown last night.” Besides moving picture shows, throughout the 1920s, the Imperial Theatre also continued to be used for public gatherings, of civic, church and school groups.

Just as the neighboring Lincoln Highway Garage was razed because it stood in he path of the approach for the new Susquehanna River Bridge. So was the fate of the Imperial Theatre. The theatre closed after the showing of a moving picture on Saturday March 30, 1929; it was torn down a short time thereafter.

The following illustration shows a semi-transparent 1923 Sanborn Map superimposed over a present Google aerial photo to show the locations of the Lincoln Highway Garage and the Imperial Theatre in relation to the approach for the new Susquehanna River Bridge; which opened in 1930 and today is the Route 462 bridge between Wrightsville and Columbia.