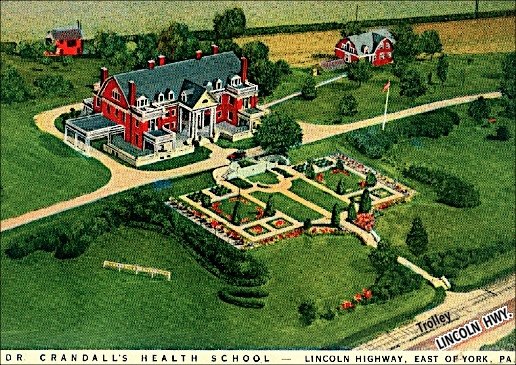 York Council of Boy Scouts, Troop 15, installed a concrete Lincoln Highway marker near the west corner of Dr. Crandall’s resort on September 1, 1928; as reported in newspapers and Lincoln Highway Association notes of that time. Deed research and historic aerial photos are used to pinpoint where that marker was placed in terms of present surroundings.

Trolley service in and near the City of York existed from August 18, 1892 to February 4, 1939. However Crandall’s was along the York to Wrightsville trolley, which was in service for a shorter time span; from May 21, 1904 to February 1, 1933. The concrete Lincoln Highway marker was likely placed to the south side of the trolley tracks, so it would have been placed much further back from the road than during normal circumstances.

C. Robert Kopp built the mansion in 1906 on a 24.8-acre parcel he purchased in 1903 from the Estate of Rachel Bahn. Charles Robert Kopp (1865-1937) was a patent medicine manufacturer. His product “Kopp’s Baby’s Friend” was pulled from the market following a federal investigation. The federal probe also resulted in fines and the transfer of his property, including this mansion, to a trustee.

The mansion and the 24.8-acre property become Dr. George E. Crandall’s Health School in 1921. Dr. Crandall was following the Tilden plan; which relied upon a nontraditional health technique based upon improving type of food intake rather than using medical drugs to treat his patients.

The message side of the postcard, contains a note from “Aunt Elsie” to Ed. Fisher & Family in Johnstown. She states every meal is served with hot water and half a lemon. She also observes heavy traffic on the Lincoln Highway.

George E. Crandall and Dr. L. M. Crandall (note that George is not listed as a doctor on the deed), 914 Buchanan Ave., Lancaster, PA, take over the mortgage on the 24.8-acre property from Fannie O. Bashline on August 10, 1921 (Deed Book 21X, Page 240: The transfer fee is paid by Morris D. Crandall of Salamenca, NY; he is the father of George and Louie Crandall)

The mites and bounds of Dr. George E. Crandall’s 24.8-acre property are plotted in yellow on the September 15, 1937 aerial photo. Also pointed out is where a concrete Lincoln Highway marker was installed September 1, 1928; i.e. near the west corner of Dr. Crandall’s resort.

Dr. George E. Crandall died on April 27, 1949. The health school continued under the control of his son John Crandall; however this was short lived, the mansion was destroyed in an enormous fire on November 25, 1949.

The mansion was in Springettsbury Township, however the largest part of the east portion of the property lies in Hellam Township. The boundaries of Dr. Crandall’s 24.8-acre property and the locations of the features in his Health School are transferred from the 1937 aerial photo to the following 2013 aerial photo.

York Council of Boy Scouts, Troop 15, installed a concrete Lincoln Highway marker near west corner of Dr. Crandall’s resort on Sept. 1, 1928. In terms of present surroundings, per this eastward looking photo, that marker would have been placed just east of Stonewood Road.; in front of the Sheetz Convenience Store at 3998 East Market Street.