Denmark’s world famous equestrienne Lilian Wittmack used this promotional literature during the 1950s, in the United States, for booking appearances at county fairs, horse shows, TV programs and other events. Lilian announced her decision to make York her permanent residence in the States during a June 1950 horse show appearance for the York County Horsemen’s association.

With that decision, when not touring, Lilian stabled her horses at both Matthews’ and Haines’ Stables while residing nearby in White’s Trailer Park, just east of the Paddock Restaurant along the Lincoln Highway in Springettsbury Township. Lilian Wittmack was married to Columbia industrialist George A. Roye on October 3, 1950. George would later own one of the original stores in the York County Shopping Center.

While living in the mobile home Lilian likely dreamed of turning the empty fields behind White’s Trailer Park into her own stables. That dream became a reality in July of 1951 when “Lilian A. M. Roye and George A. Roye, her husband” purchase property from Katie I. Moul, the widow of Daniel C. Moul. Bri-Mar stables and track opened later in 1951 and the full facilities of the Bri-Mar Riding Academy opened in 1953. My post Bri-Mar track just off Lincoln Highway  contains aerial photos from 1957 and 1972.

The further extension of Eastern Boulevard through this area in the early 1990s cut through the Bri-Mar track. Lilian gifted the Eastside Assembly of God her remaining Bri-Mar property, prior to her death in 2001. That church sits at 3430 Eastern Boulevard.

Lilian Wittmack was born in Copenhagen, Denmark. From an early age she excelled at training horses and soon was only entering horses in competitions that she had trained. Prior to WWII, Lilian was the All-Danish national jumping and dressage champion for six consecutive years. It was a time when these events were still dominated by military trained personnel. Lilian picked up more wins in competing throughout Europe. Lilian was the first woman to win the most difficult jumping event in all Europe, The Grand Prix de Luzerne in Switzerland.

After WWII, Lilian Wittmack turned professional, beginning in 1947 and throughout 1948, performing with the Bertram Mills Circus of England; where she exhibited her horsemanship skills throughout Europe. Lilian’s billing was “Denmark’s world famous equestrienne, in her flawless performance of Dressage, Olympic jumping and wonderful dancing horses.” This photo of Lilian during her circus days is from the International Equestrian Organization web site. 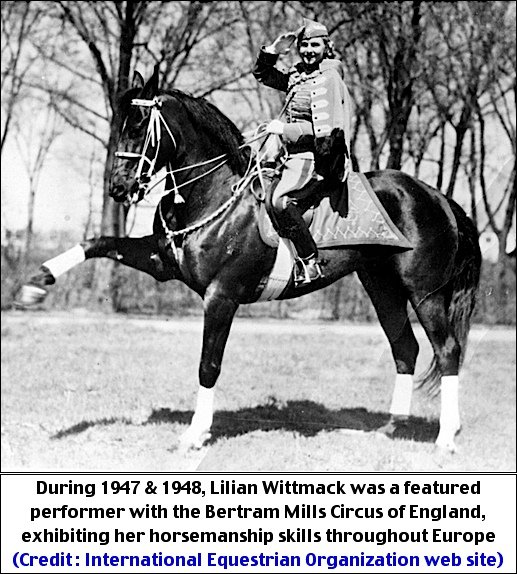 In 1949, Lilian signed a one-year contact to perform with the Ringling Brothers and Barnum & Bailey Circus; logging over 20,000 miles traveling throughout the United States. Lilian performed with her horses in the coveted center ring of the three-ring circus.

In 1950, Lilian struck out on a decade of booking herself in appearances throughout the United States; at events such as: county fairs, horse shows and TV programs. An appearance at a local horse show brought Lilian to York in June 1950. Quoting a few paragraphs from the June 23, 1950, issue of The Gazette and Daily, and followed by the photo accompanying that article:

Miss Wittmack’s horsemanship record includes command performances before Princess Juliana of the Netherlands; Princess Elizabeth and Winston Churchill, of England; and King Christian of Denmark. She was the only civilian from her country representing in international horsemanship competition, and the only woman to win the international horse-show competition at Luzerne, Switzerland.

Last year she was the feature attraction with Ringling Brothers circus and the year before she was a member of the largest circus troop in England.

She has appeared in various shows in this country and has finally selected York as the place she would like to live. She expects to make York her permanent home it was learned last night. She was here with Ringling Brothers last year. 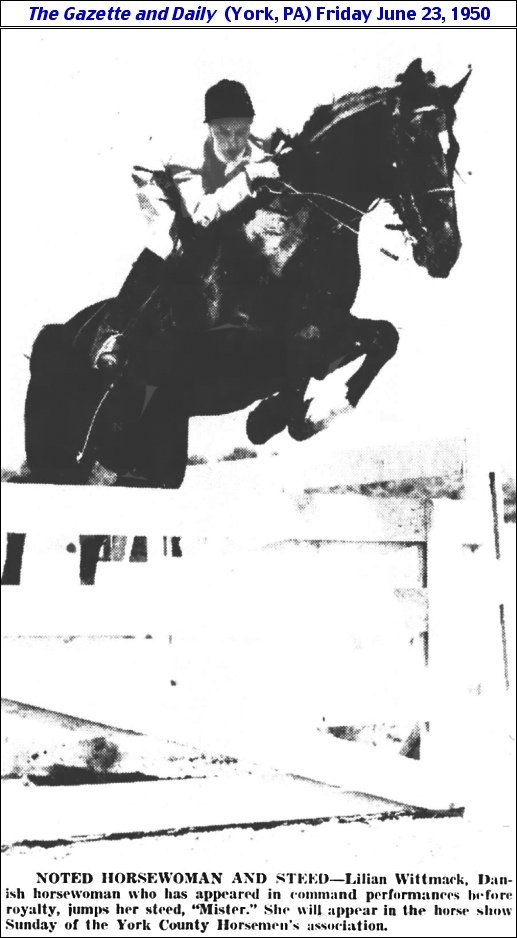 Lilian continued to make appearances in the Mid-Atlantic & New England States during the 1950s, even after opening Bri-Mar stables. For five years, she made several appearances each season on the CBS-TV show Big Top where she reprised many of her circus routines.

Bri-Mar stables became a center for the sport of Dressage in the United States through the efforts of Lilian. Here many competitions originated and were held at the first-class facilities she created at Bri-Mar; until the growing appeal of the sport forced a move to a bigger venues in the 1970s. The following are the final two paragraphs from the induction speech of Lilian Wittmack Roye into the United States Dressage Federation (USDF) Hall of Fame:

After hosting a few unrecognized shows, Lilian organized the first American Horse Shows Association (AHSA) recognized dressage show held in the US in 1955; hosting riders from Canada to Michigan. She hand-wrote all the tests, which she translated from Danish, and judged the show herself. In February of 1958, Lilian founded the International Equestrian Organization (IEO); USDF’s oldest established and charter Group Member Organization. Lilian was instrumental in IEO establishing their first recognized dressage show. In 1976, the club produced another milestone; the first FEI-sanctioned dressage competition in the US, held at the York Fairgrounds. The current success of dressage competition in the US is a direct result of Lilian’s efforts in growing the sport.

USDF Historical Recognition Committee Chair Bettina Longacre says, “Every now and then a gem is found, Lilian Wittmack Roye is one. She held dressage shows in the 1950s, when the civilians were just starting to take over the sport and not many people knew what the word meant, much less how to hold a formal dressage show. Lilian is truly one of our founding mothers, and it is an honor to have her inducted into the Roemer Foundation/USDF Hall of Fame.”

The Bri-Mar facilities were accessed via a lane off of Stone Ridge Road; the address was 3391 Stone Ridge Road. Bri-Mar was well screened by trees, from both the Lincoln Highway and Stone Ridge Road, so not many knew it was there. I’ve annotated the following 1972 aerial photo to show the layout of the facilities, since they no longer exist as a riding school. This westward view of Bri-Mar is from a 1972 Springettsbury Township Report to the Residents, within the collections of the York County History Center. 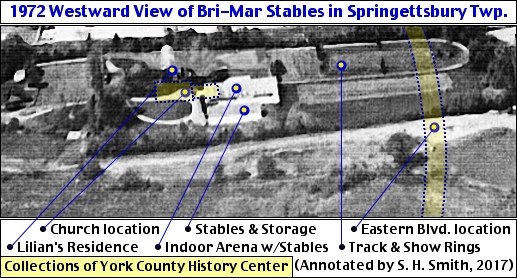 I’ve pointed out the location of the further extension of Eastern Boulevard through this area in the early 1990s; where it cut through the north end of the Bri-Mar track. Lilian Wittmack Roye gifted the Eastside Assembly of God her remaining Bri-Mar property, prior to her death in 2001 (her husband George Roye died in 1965). I’ve marked the present location of the church on the property; sitting between the still standing cement block “Stables & Storage” building and Lilian’s residence. The indoor arena was in bad shape and was torn down.  The church sits at 3430 Eastern Boulevard.

The 1968 publication “Greater York in Action” by The York Area Chamber of Commerce contains a nice piece about Bri-Mar; quoting the first three paragraphs from the “Riding School” article on page 216:

Included in the many opportunities for sport and recreation in the York area is the unique Bri-Mar School of Equitation established in 1953. Mrs. Lilian Wittmack Roye, owner, director, and head instructor, has shown successfully in international jumping competitions throughout Europe and is the winner of more than 1,000 prizes.

Located three miles from the center of York, the year round facilities of the school include a large indoor riding hall with a spacious spectators’ lounge, an Olympic size outdoor dressage arena and jumping course, a large galloping track, and dressing room and shower. There are twenty-three box stalls in the stables, and horses may be boarded at Bri-Mar.

Classes center on dressage, a specialized type of teaching and learning for horse and rider since both are judged in the obedience tests. Dressage is considered the basis of all good riding including jumping, hunting, pleasure, and exercise riding. Weekly residential horsemanship courses are offered during the summer. All riding instruction features the balanced seat as taught in Europe.