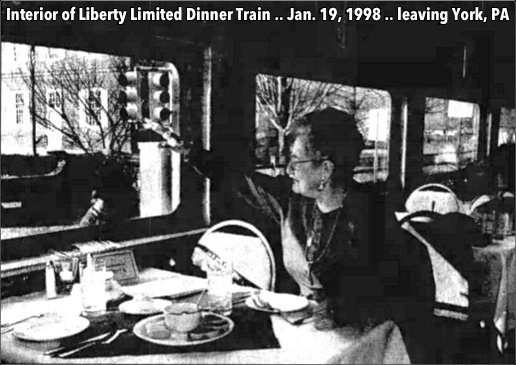 Since June 1996, Northern Central Railway, Inc. operated the Liberty Limited Dinner Train from New Freedom, however only traveling as far north as Hyde; which is in Spring Garden Township, just west of the Country Club of York. Beginning in January 1998, preliminary rail agreements had been forged which allowed extending the dinner train journey all he way into the City of York.

The dinners sat at four-person tables and gazed upon the lovely countryside surrounding the South Branch of the Codorus Creek, via large windows, as the train moved at a maximum speed of 15-mph. Besides the dinner, actors from Otter Productions at Baldwin, Md., performed regularly on the Liberty Limited Dinner Train; presenting: musicals, comedies and murder mysteries. Another popular act featured Peck Foster and the Bluegrass Brakemen, a musical trio that combined music, comedy and sing-alongs.

The ability to operate between York City and New Freedom was a big part that made the dinner train profitable; and there was even talk about weekend dinner trains traveling north to Mt. Wolf, York Haven, or beyond. However after several years, efforts failed to finalize rail agreements, which would allow continued operations into the City of York. Shortly thereafter, the last Liberty Limited Dinner Train ran September 2, 2001. In its five years of operation, it served about 75,000 passengers.

Thanks to Rob Cunningham for suggesting the Liberty Limited Dinner Train topic. It was a trip Rob took many times with his wife and friends. For him, it always created fond nostalgia of trips on the original namesake Liberty Limited of the Pennsylvania Railroad.

Rob attended my presentation about the “Northern Central Railway in Baltimore County” for the Baltimore County Historical Society at the Morris Meadows Campground, and was happy I included a little about the Liberty Limited.

Rob noted as a teenager he often accompanied his father on business trips to Chicago. They always traveled the Liberty Limited between Baltimore and Chicago. Rob recalled, “We would leave Baltimore in the early evening and arrive in Chicago about 8:00 o’clock in the morning. Memories of those Liberty Limited trips with dad include: cherished conversations over a nice supper, the luxury of a Pullman sleeper and wonderful early breakfasts while sunrise painted the ever changing landscape.”

The only York County stop on the Pennsylvania Railroad’s Liberty Limited was the City of York. In the 836 rail miles between Washington, D.C. and Chicago, there were only 12 intermediate stops. Baltimore was the only stop in Maryland. The four stops in Pennsylvania were: York, Harrisburg, Altoona and Pittsburgh.

Heading east to Washington, D.C., the Liberty Limited was Pennsylvania Railroad train number 58, and heading west to Chicago, it was train number 59. These trains were originally named the Washington-Broadway Limited, but in 1925, they were re-christened the Liberty Limited. At the rear of the 10 to 14 mainly Pullman car trains, was an observation car displaying an illuminated keystone-shaped sign with the Liberty Bell and the train name.

The Liberty Limited was one of the initial trains of Pennsylvania Railroad’s “Fleet of Modernism” that debuted on June 15, 1938; featuring streamline designs and color schemes by the famous industrial designer Raymond Lowery.

As the Liberty Limited sped through many towns on the June 15, 1938 streamliner debut, it was saluted, via factory whistles, all along the route. For southern York County, the Gazette and Daily reported, “When the Liberty Limited crack train on the Pennsylvania Railroad is on its way from Washington to Chicago, on its initial trip with the new streamlined equipment, this Wednesday, industrial plants in the lower end of the county will blow whistles for a salute. When it passes through New Freedom at 6:55 p.m. the whistles on the American Insulator plant will be sounded. When it passes through Glen Rock at 7:02 p.m. the whistle on the Coleman Furniture Enterprise will be blown.”

With a 4.7-mile rail distance between New Freedom and Glen Rock, those times translate to a train speed in that area of 40 mph; which was the limit of express trains through towns. In open stretches the Liberty Limited traveled much faster, in some places approached 100 mph.

The construction of the Interstate Highway System, and the rapid rise of reasonably affordable long-distance air travel, had a big impact on the practically overnight free-fall in the number of long-distance rail passengers. In December of 1957, the Liberty Limited was dropped from Pennsylvania Railroad schedules.

May 1, 1971 marked the last passenger train on the Penn Central / Pennsylvania Railroad / Northern Central Railway rails in southern York County. The June of 1972 force of nature, as Hurricane Agnes, destroyed the infrastructure to the point the rail line was abandoned.

The Commonwealth of Pennsylvania rebuilt the rail line in 1985 for freight service, but when that business failed to materialize, the line went dormant again until 1996. At that time, the County of York, which had purchased the line, leased it to Northern Central Railway, Inc., a new company named after the original rail line. That firm operated the Liberty Limited Dinner Train; again named for the namesake Liberty Limited train, which had operated over these same rails decades earlier.

Links to related railroad posts for southern area of York County include:

Why is the Steam Into History locomotive named York #17 ?