Letters to LINCOLN during the Invasion; “We need John C. Fremont”

This is the second in a series of letters or messages sent to President Abraham Lincoln during the Invasion of Pennsylvania by the Rebels during June and July of 1863.  Other Letters to LINCOLN in this series include:

Continue reading to see who wrote “We need John C. Fremont, who will create an enthusiasm by which we can raise 20,000 men in forty-eight hours.”

The following two messages were sent from civic leaders in Pittsburgh, Pennsylvania to President Abraham Lincoln.  They urged Lincoln to place John C. Fremont in charge of the defenses of Pittsburgh.  Both messages were received at The White House just hours before a small group of Rebel Cavalrymen captured Hanover Junction; the first Confederate military engagement of significance in York County.

Pittsburgh was recognized as a potential target of the invading rebels, such that Major General William Brooks had been dispatched to organize defenses in Western Pennsylvania.  The civic leaders in Pittsburgh believed that the initial movements eastward in Pennsylvania, from the Pennsylvania invasion entry point at Franklin County, by the Rebels were a diversion for a major attack westward into Pittsburgh.  From which location, Lee’s Army could quickly return to the South, if need be, through West Virginia. 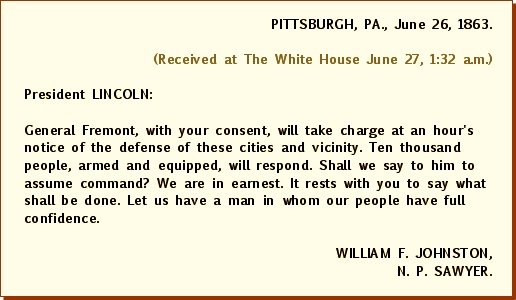 John C. Fremont was the first Presidential candidate of the new anti-slavery Republican Party in 1856.  His campaign slogan was “Free Soil, Free Men, and Fremont.”  In the three-way Presidential election of 1856, he placed second to Pennsylvania Democrat James Buchanan from Lancaster County.

Fremont was a Major General early in the Civil War, and rose to the rank of General.  He got himself into trouble while serving as commander of the Department of the West.  In 1861, Fremont imposed martial law and emancipated the slaves in Missouri.  Fremont was relieved of command of the Department of the West when he refused to revoke his order emancipated the slaves in Missouri.

Fremont’s next Union command was the Mountain Department of Virginia, Tennessee and Kentucky.  His forces most famously engaged those of Confederate Major General Stonewall Jackson for eight days, during early June 1862, in the Battle of Cross Keys in Virginia.  Jackson’s forces managed to slip away with fewer casualties than the Union forces.

A new Union command structure in Virginia was created later in June 1862; General Fremont did not fit in.  He went to New York and awaited another command, but none was offered.  John C. Fremont likely was in Pittsburgh during June of 1863, drumming local support for another command.

The source of these messages to Abraham Lincoln is The War of the Rebellion: a Compilation of the Official Records of the Union and Confederate Armies, Series 1, Volume 27, Part 3 (Gettysburg Campaign), Page 348, Published in 1889 by the United States War Department.