Letters to LINCOLN during the Invasion; “The People of New Jersey are Apprehensive”

This is the third in a series of letters or messages sent to President Abraham Lincoln during the Invasion of Pennsylvania by the Rebels during June and July of 1863.  Other Letters to LINCOLN in this series include:

Continue reading to see who wrote, “The people of New Jersey are apprehensive that the invasion of the enemy may extend to her soil.”

The following message was sent from Governor Joel Parker to President Abraham Lincoln. The message was sent on June 29, 1863 and was received at The White House at 5:55 P.M.  Like Simon Cameron’s letter to Lincoln, posted last week, the message was written June 29; the day following the burning of the Columbia-Wrightsville Bridge.  Governor Parker of New Jersey, as well as people in Philadelphia, still feared the rebels crossing the Susquehanna at Harrisburg or potentially fording the river and invading further east. 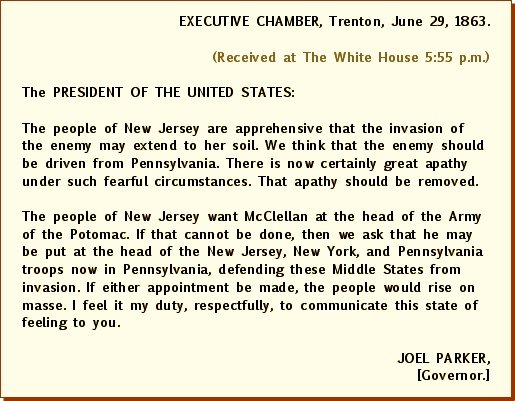 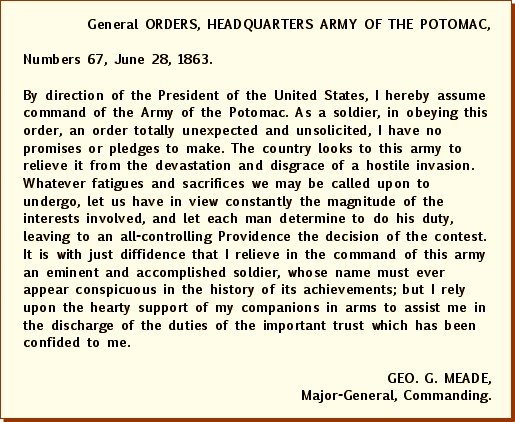 Lincoln previously appointed George B. McClellan to command the Army of the Potomac in 1861.  McClellan is often remembered as the great organizer of the Union Army and was the most popular commander with the soldiers.  When McClellan failed to pursue Lee’s army after the Battle of Antietam in 1862, Lincoln replaced McClellan with Ambrose Burnside.

Following a loss at Fredericksburg and a series of poor decisions, Lincoln removed Burnside, promoting Joseph Hooker to command the Army of the Potomac in early 1863.  Hooker improved conditions for the soldiers; including food, medical care, and leave.  However, disagreements with his staff and commanders along with a loss to Robert E. Lee forces at Chancellorsville led to Hooker’s resignation as the commander of the Army of the Potomac.

Following Hooker’s resignation, on June 28, 1863, George G. Meade was given command of the Army of the Potomac.  During the Battle of Gettysburg several days later, Meade would achieve his greatest victory by holding off Robert E. Lee’s attacks.  However Lincoln believed Meade was wrong in not finishing off the Army of Northern Virginia, in its weakened state, following the third day of the battle.

The source of these messages to Abraham Lincoln is The War of the Rebellion: a Compilation of the Official Records of the Union and Confederate Armies, Series 1, Volume 27, Part 3 (Gettysburg Campaign), Pages 409 & 374, Published in 1889 by the United States War Department.