Letters to LINCOLN during the Invasion; “Rebels at York and Carlisle yesterday a good deal agitated”

This is the sixth in a series of letters or messages sent to President Abraham Lincoln during the Invasion of Pennsylvania by the Rebels during June and July of 1863.  Other Letters to LINCOLN in this series include:

Continue reading to see who wrote, “Rebels at York and Carlisle yesterday a good deal agitated about some news they had received.”

The following message was sent from Major General Darius Couch to President Abraham Lincoln. The message was sent from Harrisburg, Pennsylvania at 9:00 p.m. on June 30, 1863 and was received at The White House at 12:00 midnight.  This message was written two days following the occupation of York and the burning of the Columbia-Wrightsville Bridge to deny the Rebel forces use of the sole river crossing into Lancaster County.

Couch is notifying Lincoln that something is up.  The Rebel forces in Carlisle, who were about to launch an attack in an attempt to capture a Susquehanna River Bridge at Harrisburg, were suddenly heading in the opposite direction.  Rebels also abandoned York and headed west.

Couch probably did not know that the bulk of the Union Army moved north faster than General Lee anticipated.  On June 29th, Lee suddenly recalled all his forces in Pennsylvania to concentrate in Adams County.  That is why the Rebels were “a good deal agitated;” they knew a major battle was brewing. 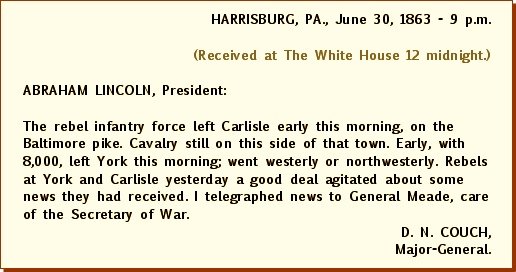 A day before this message to Abraham Lincoln was written, a report was completed; detailing the destruction of the Columbia-Wrightsville Bridge.  The following report is found in the same Official Record (noted at end of post), which has been my source for this series on Letters to LINCOLN. 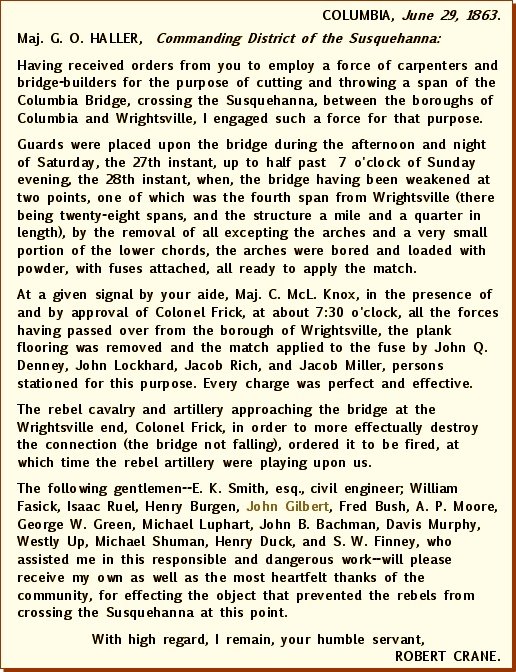 Major General Darius Couch had previously designated his aide-de-camp, Major Granville O. Haller, as the sector commander to defend Adams and York counties.  As the Rebel soldiers quickly pushed across these counties, Haller rapidly found his inexperienced forces, with only a few days of training, backed up against the Susquehanna River at Wrightsville.  This is where Haller’s militia and that of Colonel Jacob G. Frick dug in; attempting to put up a defense against the soon to arrive onslaught of a brigade of experienced Rebels.

Haller issued orders, in obedience to Couch’s orders, to his aid Major Charles Knox and Colonel Frick.  The Rebels must not gain passage over the Susquehanna River into Lancaster County; even at the expense of destroying the bridge.

On June 28th, the Rebels made fast work overrunning the Wrightsville defenses.  The report, written on June 29th, details the preparations made to render the bridge useless to the Rebels, while still making it relatively easy to repair; should conditions change.

Robert Crane wrote the report.  Crane was the superintendent of the Reading & Columbia Railroad. Haller had requested his services for rounding up and supervising a force of carpenters and bridge-builders for the purpose of destroying a span of the bridge.  As a back-up plan, combustible materials were strategically placed; should the need arise to burn several spans of the bridge.

As you’ve read in the report, the back-up plan was required.  It was thought that only a few spans of the bridge would burn, however the wind picked up.  First blowing the flames all the way across the bridge to Columbia, before the wind changed direction and blew the flames onto a few buildings in Wrightsville.  On June 29th, the final spans of the burnt bridge are probably falling into the river as Robert Crane writes his report.

I have one name highlighted in the last paragraph of Crane’s report; John Gilbert.  He is my Great-Grandfather and will be the subject of my post on Friday June 28th; the 150th Anniversary of the Burning of the Bridge to halt the eastward invasion of the Rebels through Pennsylvania.

The source of the above message to Abraham Lincoln and the report by Robert Crane is The War of the Rebellion: a Compilation of the Official Records of the Union and Confederate Armies, Series 1, Volume 27, Part 3 (Gettysburg Campaign), Pages 434, 410 & 411, Published in 1889 by the United States War Department.