Letters to LINCOLN during the Invasion; “if Lee gets his army across the Susquehanna”

This is the first in a series of letters or messages sent to President Abraham Lincoln during the Invasion of Pennsylvania by the Rebels during June and July of 1863.  Other Letters to LINCOLN in this series include:

Continue reading to see who wrote “if Lee gets his army across the Susquehanna, and puts our armies on the defensive of that line, you will readily comprehend the disastrous results that must follow to the country.”

The following message was sent from Simon Cameron to President Abraham Lincoln.  Simon Cameron was a Pennsylvania Republican Senator to the U. S. Congress prior to Lincoln appointing him as Secretary of War early in the Civil War.  Cameron served in Lincoln’s Cabinet until January 1862.  At the time Simon wrote this message in 1863, though neither a senator nor governor, Cameron managed to control a large part of the Lincoln Administration patronage in Pennsylvania.  After the war, Cameron was reelected to the Senate where he served as chairman of the Foreign Relations Committee. 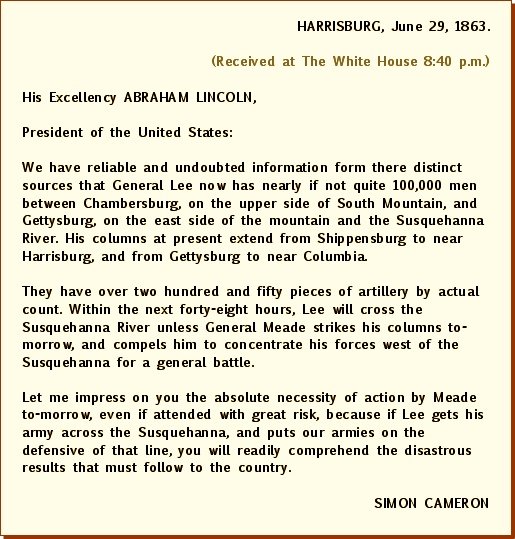 The message was written June 29; the day following the burning of the Columbia-Wrightsville Bridge.  Simon Cameron still feared the rebels crossing the Susquehanna at Harrisburg or potentially fording the river.

The source of this message to Abraham Lincoln is The War of the Rebellion: a Compilation of the Official Records of the Union and Confederate Armies, Series 1, Volume 27, Part 3 (Gettysburg Campaign), Page 409, Published in 1889 by the United States War Department.