Letters to LINCOLN during the Invasion; “Colonel Ruff, Third Cavalry, U. S. Army”

This is the fourth in a series of letters or messages sent to President Abraham Lincoln during the Invasion of Pennsylvania by the Rebels during June and July of 1863.  Other Letters to LINCOLN in this series include:

Continue reading to see who wrote, “The services of Colonel Ruff, Third Cavalry, U. S. Army, are indispensably necessary to me in this, his native State, in this emergency.”

The following message was sent from Governor Andrew G. Curtin of Pennsylvania to President Abraham Lincoln. The message was sent on June 28, 1863 and was received at The White House at 8:20.  The message was written the day the towns of York & Wrightsville were occupied and was received at The White House as the Columbia-Wrightsville Bridge was already burning for nearly one-hour.  Governor Curtin still feared the rebels crossing the Susquehanna at Harrisburg or potentially fording the river and invading further east.

President Lincoln received many letters asking his help in appointing various soldiers to various positions.  This was not the first request made to the Lincoln in the behalf of Colonel Ruff. 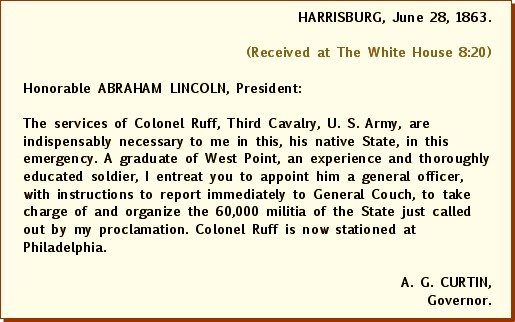 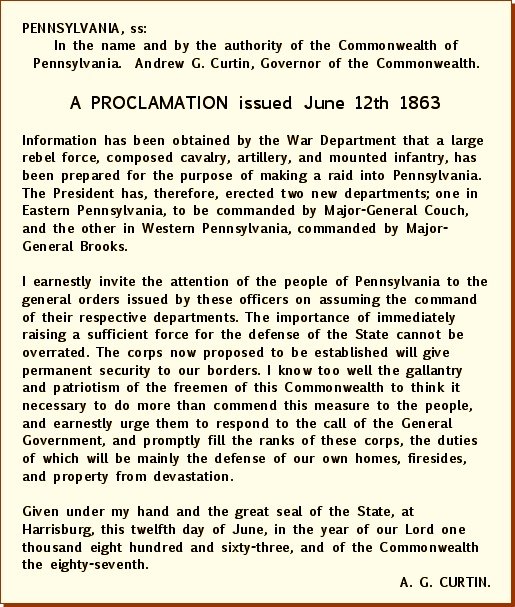 Governor Andrew Curtin became a close friend and confidant of Abraham Lincoln.  This close working arrangement was out of necessity, owing to Pennsylvania’s close proximity to Washington, D.C. for both supply and protection.  It was Curtin who had recommended George G. Meade, a Pennsylvania officer, for brigadier general and command of one of the Pennsylvania reserve brigades in 1861.  With the Rebels invading Pennsylvania in June 1863, the appointment by Lincoln of Meade to command the Army of the Potomac probably was influenced by this friendship with Curtin.

Governor Curtin was the principal force behind the establishment of The Gettysburg Soldiers Cemetery.  Originally this cemetery was state owned; it was turned over to the Federal Government in 1872 and became the Gettysburg National Cemetery.  Through his agent, David Wills, Curtin procured the attendance of President Abraham Lincoln at the dedication of the cemetery.  Governor Curtin was sitting with Lincoln on the platform on November 19th 1863, when Lincoln delivered his Gettysburg Address.

I noted the June 28, 1863 letter was not the first request made to President Lincoln in the behalf of Colonel Ruff.  Governor Andrew Curtin earlier wrote a letter to Lincoln on October 10, 1861; recommending Charles F. Ruff of Pennsylvania, for appointment as brigadier general.

From The Collected Works of Abraham Lincoln, Volume 4, Page 552, it is noted that Lincoln wrote the following about Col. Ruff: “Col. C. F. Ruff—for Brig. Gen’l. in regular Army. Dr. McClintock is strongly in favor of him.”

Also from The Collected Works of Abraham Lincoln, Volume 4, Page 552, this comment is made about Lincoln’s endorsement:

Lincoln’s endorsement is written on the back of a copy of Governor Andrew G. Curtin’s letter, October 10, 1861, recommending Charles F. Ruff of Pennsylvania, for appointment as brigadier general. Dr. McClintock was probably John McClintock, Methodist minister of Pennsylvania, at the time pastor of the American Chapel in Paris, France. There is no record of Ruff’s appointment.

Remember that it was Governor Curtin who had recommended George G. Meade to be a brigadier general in 1861.  That same year Curtin also recommended Charles F. Ruff for appointment as brigadier general.  What foresight, the selection was Meade in 1861; two years later Meade was the victorious commander at Gettysburg.

The source of the above messages to Abraham Lincoln is The War of the Rebellion: a Compilation of the Official Records of the Union and Confederate Armies, Series 1, Volume 27, Part 3 (Gettysburg Campaign), Pages 393 & 79, Published in 1889 by the United States War Department.