There were 348 pupils attending Springettsbury Township schools, during the 1910-1911 school year. The classes were conducted in 11 rooms, with an average of 32 students per classroom. Seven of the schoolhouses were one-room schoolhouses; housing all 8-grades. Two buildings, in Pleasureville and the Glades, contained two-rooms; with the Primary room for grades 1 to 4, and the Grammar room for grades 5 to 8. I’ve annotated the locations and population of these schools using the Springettsbury section of a 1911 Pennsylvania State Highway Map of York County.

Population details for most schoolhouses, especially those over a century ago, are not readily available. That information for all the Springettsbury Township schools, during the 1910-1911 school year, are available due to a petition filed on May 18, 1911 with the Court of Common Pleas of York County. That petition asked the courts to carve out a portion of the Springettsbury Township School District as an Independent School District within the township boundaries. As a result of the petition, the County School Superintendent was required to provide details about the population of all the schools in the township at the time the petition was filed.

“Ask for Independent District” is the headlines of an article in the May 30, 1911, issue of The York Daily. Quoting that article in its entirety:

Proceedings for the creation of an independent school district out of a portion of Springettsbury township were begun in court yesterday by 64 taxable inhabitants of the proposed district. The court fixed June 12th as the time for hearing the matter. The petitioners allege that they desire better school facilities than are or would be provided by the school district of Springettsbury township, and that in order to procure better facilities they ask that an independent school district be created out of the territory described in the petition.

The hearing on June 12th focused on the lack of responsiveness by the existing Springettsbury Township School Board to the plight of the petitioners’ children. References were made to earlier petitions to the Township School Board; made by residents of the East York development underway along East Market Street and by residents of the Longstown (Tilden) area.  Those petitions asked for new schoolhouse(s) to replace Lefever’s One-Room Schoolhouse.

John and Eve Lefever provided the land for Lefever’s schoolhouse on August 11, 1849. The schoolhouse sat on a triangular plot of land and in terms of present roads it was located on the east side of Haines Road, a short distance south of Eastern Boulevard. Again in terms of present roads, Lefever’s school served children in the southwest portion of Springettsbury Township; generally south of Whiteford Road, east of North Hills Run and west of Route 24 (Mt. Zion and Edgewood Roads).

The Springettsbury Township School Board described Lefever’s as typical to the other one-room schoolhouses in the district. The building size was 26-feet by 34-feet. The petitioners pointed out the overcrowding (43 pupils to a district average of 32) and deplorable condition of the privies, while assailing the caliber of the teachers.

On December 30, 1911, York County Judge Wanner handed down a decree providing for the creation of an Independent School District out of a part of Springettsbury Township. In September of 1912, the initial two schoolhouses, in the new school district, opened their doors; the two-room Hiestand Schoolhouse in East York, and the one-room Longstown Schoolhouse.  The 1911-1912 school year marked the final year Lefever’s was utilized as a schoolhouse. It was maintained by the school district for several years, until it was sold on May 19, 1918, and torn down shortly thereafter.

The boundaries of the newly created school district basically reflected the same region from which Lefever’s schoolhouse drew their students. Over the years, The Gazette and Daily used the following map to show the boundaries of the Independent School District in relationship to all of Springettsbury Township. 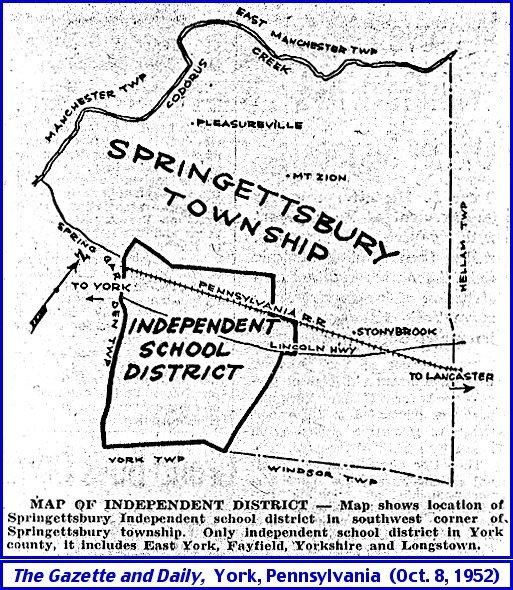 Basically the boundaries of the York Suburban School District in Springettsbury Township mirror those of Lefever’s One-Room Schoolhouse; i.e. serving children in the southwest portion of Springettsbury Township; generally south of Whiteford Road, east of North Hills Run and west of Route 24 (Mt. Zion and Edgewood Roads). I say basically, because during the 1911 creation of the boundary map for the Independent School District of Springettsbury Township, there is a bump-out to the east side of Mt. Zion Road, south of the railroad tracks; and a bump-in to the west side of Mt. Zion Road, north of the railroad tracks. These school district boundary details, created in 1911, are carried down to this day, as seen on the following section of the York Suburban District Map from their website. 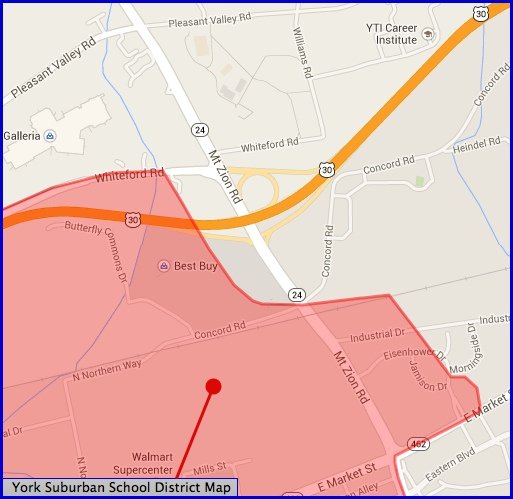 Links to related posts on schools in Springettsbury Township include: