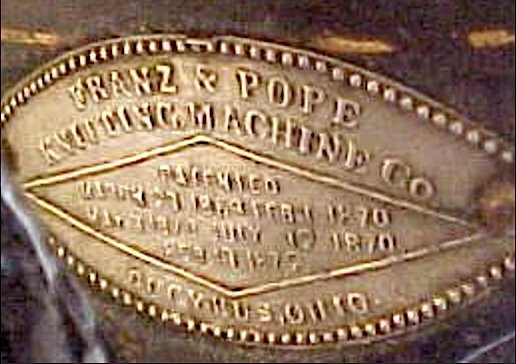 An early business of Lee Jeans founder Henry David Lee was headquartered in York during the early 1870s. Exploration of the time periods when the eleven post offices operated, within the city, assisted in identifying the location of H. D. Lee & Co.; who advertised their office at “one Door West of Post Office, York, PA.”

The York County History Center received a query on the business Henry David Lee [1849-1928] operated in York, PA. The City Directories and Manuscript files did not yield a specific location for H. D. Lee & Co.

I took up the task to identify a precise address for the business via understanding which post office site the business referred too in advertising as “one Door West of Post Office, York, PA.” That is the location noted on their letterhead and within local ads; which ran from 1871 until 1874. A typical ad follows from The York Gazette:

H. D. Lee & Co. were General Agents for the Franz & Pope Knitting Machine; which was manufactured at Bucyrus, Ohio. This heavily patented machine was intended for family use to knit socks. Only seven minutes were required per sock; heel and toe being automatically complete. The York office sold directly and also signed up agents in their territory. Mrs. William Fridley, in Carlisle, was one of their agents.

1st York P.O. location (January 1790 until ?) [P1—northeast corner of Water and Market Streets], [G1—near Jonathan Owen’s Corner]. Today, that site, at 157 West Market Street, is the Golden Plough Tavern, as it was in colonial times; since Water Street was renamed Pershing Avenue in the 20th Century.

5th York P.O. location (~1830s, however no later than 1837) [P5—in a building which stood on the site of the County Court House], [G3—in a house where the court house now stands]. The initial court house at that site was built in 1837. Today the former court house is the York County Administration Center at 28 East Market Street.

10th York P.O. location (1895 until 1913) [P10—building at the northeast corner of Philadelphia and Beaver Streets]. The present address of that building is 55 West Philadelphia Street.

11th York P.O. location (1913 until 1994) Building is at the southwest corner of George and Princess Streets. The address of that building is 200 South George Street.

12th York P.O. location; the first outside the city (1994 to Present) Building located at 3435 Concord Road in Springettsbury Township; across the road from the York County Prison.

The seventh post office location in York was a building immediately east of Trinity Church on West Market Street, per Prowell; or in a house on present site of Trinity churchyard per Gibson. I’ll resolve if Prowell, or Gibson, is correct via closer examination of ads, such as the following:

A Dentist at “No. 8 West Market Street, 4 doors East of Post Office;” i.e. near the Trinity Church location, makes references to that seventh post office in his ads, which cover the 1870 to 1874 range; i.e. the same time frame as H. D. Lee & Co., located at “one Door West of Post Office, York, PA.” Note these are the early, lower, street address numbers; prior to street renumbering in York.

I studied building locations, stated as number of doors, east or west, of the Post Office combined with early house number addresses via the earliest Sanborn Fire Insurance Map of the area; which is March of 1887. From that study I was 95% certain H. D. Lee & Co. was headquartered in the former Col. Thomas Hartley house in the early 1870s.

This present view shows where the Col. Thomas Hartley house stood in York until 1876. The plaque on the fence, fronting Trinity United Church of Christ, at 32 West Market Street, states: “Here stood the home of Col. Thomas Hartley, Revolutionary Soldier and Patriot; Brigade Commander of Pennsylvania Troops at Battles of Brandywine and Germantown; For 12 years Member of Congress from PA. The Friend of Washington, whom he entertained here in July 1791.”

The follow-up post, Last tenant of the Colonel Hartley house, provides details raising the certainty to 100%; that H. D. Lee & Co. was headquartered in the former Col. Thomas Hartley house in York, PA. And also confirms George Prowell was correct about the seventh Post Office location in York, i.e. in a building immediately east of Trinity Church on West Market Street.

I’ll close this post with the original patent drawing for the Knitting Machine invented by William Franz and William Pope and marketing by H. D. Lee & Co. in York, PA.

Franz and Pope continued to make patentable improvements to this knitting machine; being issued additional United States Patents 99425, 99426, 102529 and 105187 at various times during 1870.