Founders and Leaders of York Corporation 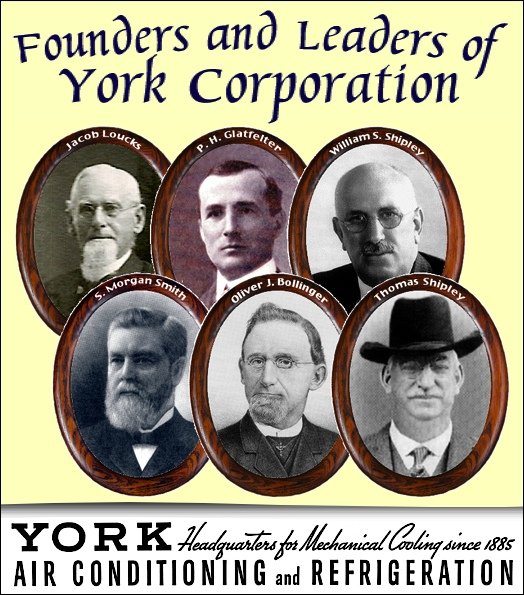 This illustration includes some of the key founders and leaders of York Corporation. I use it in two of my talks about the history of York Air Conditioning and Refrigeration.

Last month I was the speaker at the 87th Annual Reunion of the Twenty-Five Years Continuous Service Club of the company; which has been part of Johnson Controls since 2005. The 1466 employee members of the club have worked with the company producing YORK products for a total of more than 50,990-years.

Founders and Leaders of York Corporation

Here are my notes, from the first part of my presentation, during the 87th Annual Reunion of the Twenty-Five Years Continuous Service Club at the Wyndham Garden Hotel, York, PA, on October 20, 2016:

Thank you for this opportunity to speak at the 25-Year Club; a club I became a member of 19-years ago.

Prominent advertising for York products, beginning in the 1930s, proudly proclaim, Headquarters for Mechanical Cooling since 1885. That year, an 8-Ton ice-making machine, bound for Mississippi, was manufactured in their small factory along North Penn Street in York. The initial factory has long since been torn down; the site is now the Roosevelt Tavern parking lot.

The company was founded as the York Manufacturing Company there in 1874 and initially their principle products were a wooden washing machine; produced per the design of the first company President Stephen Morgan Smith, and a turbine water wheel; produced per the design of the company Engineer Oliver Bollinger. Bollinger’s cousin, Henry LaMott was the Factory Superintendent in what had previously been his machine shop. Jacob Loucks was company Treasurer; he contributed all the start-up capital, $10,000 as his company buy-in; still leaving Loucks a small fortune he accumulated operating Paper Mills in Maryland and Virginia.

One of Jacob Loucks paper making apprentices was P. H. Glatfelter, who went on to purchase a small run-down Spring Grove paper mill in 1863 and turn it into a prosperous business; which still operates today. Relations ran deeper than teacher/apprentice alone. P. H. Glatfelter married Jacob Loucks’ younger sister Amanda. These Loucks and Glatfelter family connections would go on to figure prominently in the history of our company.

By the time the company was two-years-old, the original washing machine and original water turbine had become obsolete. As a result, until the tiny factory was tooled-up for their initial refrigeration product in 1885, the factory basically functioned as a small job-shop; employing on the average 25 workmen.

This management infighting originated during the first year of the company’s existence, when Oliver Bollinger left the company to start his own water turbine company. In 1877, Smith, while still president of the York Manufacturing Company, also started a water turbine company, which he would christen the S. Morgan Smith Company. The York Manufacturing Company was utilized as one of the job shops to produce turbines for both Bollinger’s and Smith’s Companies.

By 1880, Jacob Loucks had bought out all the remaining founding investors and many of the other company investors. Jacob’s son, George Loucks plus other Loucks relatives and acquaintances had varying levels of involvement and investment in the company until Jacob Loucks made the 1883 decision to get into the ice-making machine business.

In 1885, that machine to Mississippi, was the only one sold. In 1886, two machines were sold. The following year, in 1887, annual sales dropped to one machine. This was not very good for a shop tooled-up to make ten machines per year. Why the low sales? The earliest ice-making machines were expensive to purchase and to operate, compared to the natural so-called “free ice;” harvested in the winter and stored in ice-houses for use during the warmer months. Ice had become an ever-growing necessity to keep food from spoiling.

Loucks and several investors suffered company and personal losses in trying to keep the company afloat. Jacob Loucks personal wealth had been depleted by the time the courts declared the York Manufacturing Company insolvent in 1888. The company’s assets would have been put up for auction to pay off creditors, if Loucks brother-in-law, P. H. Glatfelter had not stepped in, paying off all York Manufacturing Company debts and assuming control of the company. P. H. Glatfelter became the company’s fourth president.

P. H. Glatfelter brought in his son William Glatfelter and his nephew George Loucks to help run the company. He hired a new refrigeration specialist, Stuart St. Clair, as general manager and head engineer. However, at the end of Glatfelter’s first full year of involvement, that is the end of 1889, no additional ice-making machines were sold.

Fate intervened in 1890. A very warm winter resulted in half of the normal ice harvest. The ice-houses were down to their last blocks of natural ice in July. No ice for the remainder of the warm months resulted in food spoilages and widespread food poisoning. The demand for the new-fangled mechanical ice-making machines skyrocketed.

For the next several years, the York Manufacturing Company produced as many ice-making machines as they could handle within the small factory along North Penn Street. The company was incorporated in 1895, to provide additional capital, so Glatfelter could build a much larger factory on land he purchased along what was then called West York Avenue; which is now Roosevelt Avenue. The initial buildings in this factory, known as the West York Plant, opened in July of 1896.

However just as the big new factory opened in 1896, the nation was experiencing the worst depression on record, resulting in a huge drop off in sales. P. H. Glatfelter never lost faith in the refrigeration industry. He put more of his own money into the company and made some bold moves. One of those bold moves was hiring the General Manager and some of his staff from Frick Company in Waynesboro.

Thomas Shipley had eleven years of refrigeration experience at Frick; a larger company then York in the late 1800s. When Shipley came to York in 1897, the factory employed 50 workmen. Glatfelter gave Shipley a free hand to make the York Manufacturing Company profitable. After only two years of Shipley in control, the company workforce topped 500; producing ice-making machines to Shipley’s designs on streamlined production lines. Seven years later 1,000 workers manned the West York Plant as sales soared.

Following the death of P. H. Glatfelter in 1907, his son William Glatfelter becomes the fifth president of the York Manufacturing Company. Bird Loucks, soon followed as the new company Treasurer; he was the youngest son of company founder Jacob Loucks. This next generation of Glatfelter/Loucks leadership, also took a hands off policy, leaving Thomas Shipley free to run the company as Vice President and General Manager; with little interference.

In 1917, the York Manufacturing Company surpassed 50% of all the Ice-Making Business in the United States. Further expansion was required to meet rising demand for their products; as a result an 80-acre site was purchased along Grantley Road in 1923.

In 1927, Glatfelter and Loucks retire, although they remain major stockholders. The board names Thomas Shipley as the sixth president of the company. Thomas Shipley wasted little time reorganizing the manufacturing, sales and construction entities, into a single more efficient organization; named the York Ice Machinery Corporation.

Thomas Shipley died in January of 1930; the board named his brother William S. Shipley, who had been with the company for many years, as the seventh president of the company. The main road running through Grantley Plant was named Shipley Boulevard in honor of Thomas Shipley.

William Shipley’s tenure as president saw the tremendous growth of air-conditioning, which coincided with Dupont’s introduction of Freon-12 in the early 1930s. In 1940, the board elected Stewart Lauer as the eighth president of the company. William S. Shipley became Chairman of the Board, freeing him up to become the national spokesman for the York Plan during World War II.

The board decided a name change for the corporation was in order during 1942. York Ice Machinery Corporation simply became York Corporation, because air conditioning products had long since overtaken sales of ice making machines. William Shipley was still Chairman of the Board of York Corporation when he died in 1951.

END of First Part … Next week I’ll follow up by posting the conclusion of my talk at the 25-Year Club.