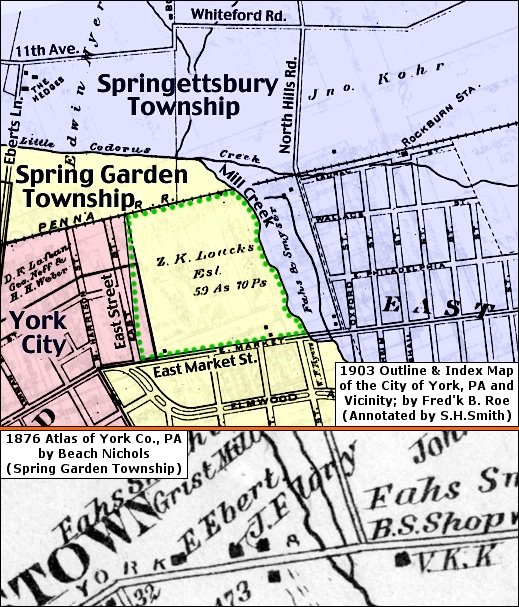 In a comment to my initial post concerning the discovery of Loucks’ Cave, Jeri Jones of Jones Geological Services noted a clue, that popped out at him, was the mention of the lead discovery as being in the area of the cave. Jeri’s knowledge of lead finds in the county resulted in a search for this cave closer to the city limits.

Follow-up newspaper articles contained clues that the cave was located within a short walk of the Lincoln Highway, i.e. Market Street, and that the cavern generally ran parallel to railroad tracks running east from York to Wrightsville.

An article in the July 7, 1916, issue of the York Daily reported on the search for a lead vein in East York by E. W. Loucks. Quoting a few sentences from that article: “Some time later a number of other [lead] specimens were uncovered by John Flory, now deceased, while plowing in the field along the Columbia & Frederick branch of the Pennsylvania railroad. The tract is now owned by Mr. Loucks, and it is on this land where the search for the vein of lead is being conducted. A cave extending parallel to the Pennsylvania tracks to a depth of several hundred feet has been recently uncovered on the Loucks tract. The cave, which is of soft limestone formation, has been visited by hundreds of people from this city and surrounding territory.” The full article, from which that quote was taken, appears at the end of this post.

The clue Loucks’ cave tract was formerly owned by John Flory made a detailed deed search possible. The 59+ acres “Z. K. Loucks Estate,” with boundaries shown by green dots, on the 1903 F. B. Roe map fits a deed string of E. W. Loucks back to John Flory (and J. F. Flory is also noted on the 1876 map of the same area) plus this tract matches all other clues in previous newspaper articles. This is also one of the prime areas that Jeri Jones initially suspected per the lead clue.

The Loucks’ tract, within Spring Garden Township, is bounded by: East Market Street on the south, East Street of York City on the west, the railroad tracks on the north and Mill Creek on the east.

The synopsis of the deed string of E. W. Loucks back to John Flory follows; whereas the very detailed, multi-page deed string can be found in Deed Book 29G, starting mid-page 82. Henry S. Forry, assignee of John Flory and Leah his wife, grants this tract to Zachariah K. Loucks, by deed dated March 31, 1890 (Deed Book 8V, page 436). Zachariah K. Loucks died April 25, 1895. The Z. K. Loucks Estate is settled per Will Book 2J, page 383, in which his four sons get this tract; of which Edwin W. Loucks is one of the sons and the one who appears to manage this property.

Edwin W. Loucks adjudicated a bankrupt and the remaining owners of the property saw no interest in the developing the cave as an attraction; instead choosing to develop this Loucks Farm tract into building lots. The 1920 Plan of Lots is from Book 21N, Page 701, and was done for the owners: Alexander W. Loucks, Henry J. Loucks Estate, and the First National Bank of York. 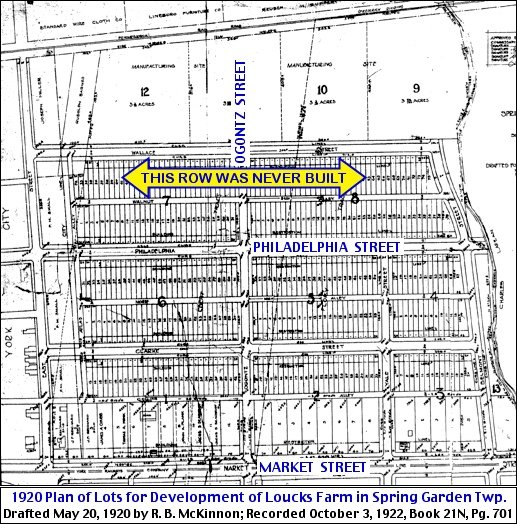 Jeri Jones asked around of people that lived in that area. He got a telephone call from Jeff Hershey, of North Codorus Township, who grew up in the 1400 block of East Philadelphia Street in the late 1940’s. He stated that when they were grading behind the houses in the 1500 block of Philadelphia Street, they hit a large sinkhole. Was it because of that sinkhole (and more sinkholes from the cave?) that the additional row of planned residential lots, just to the north of the north-side Philadelphia Street residences, was never built upon? That area is now the front yard of the manufacturing plant at the north end of Ogontz Street.

Jeri Jones of Jones Geological Services has been in touch with the Johnson Controls plant. There is evidence suggesting Loucks’ cave is likely in that area; however the entrances have long since been back filled.

Numerous newspapers report many people visited Loucks’ cave, although it seems only from 1915 until about 1920, when building lot development of this tract started. One would think that someone has a handed-down memory, photo or picture postcard of this long forgotten cavern of Spring Garden Township.

This is the full article in the July 7, 1916, issue of the York Daily reporting on the search for a lead vein in East York. Quoting the complete article:

E. W. Loucks To Make an Investigation In East York

The popular belief of older residents of East Market street and vicinity, that a vein of lead exists from near Sherman street beneath Market street, east to the city limits, and also beneath the old Flory estate, now owned by E. W. Loucks, will be proven or disproven in an investigation which is now being conducted by Mr. Loucks. In an interview yesterday the owner of the property said that he had knowledge of the supposed vein for some years. Recently, when several specimens of the ore were brought to Mr. Loucks’ office, he started an investigation in an attempt to locate the vein.

The specimens, now in possession of Mr. Loucks, were found by William Frey, a resident of Hallam, while he was assisting in digging a well, in the rear of the site now occupied by the plumbing establishment of Charles Lichtenberger, 751 East Market street. According to Mr. Frey’s statement, a vein of lead-bearing quartz was struck at a depth of 18 feet. Several specimens were analyzed at that time, Mr. Frey said, and were claimed to be bearing between 85 and 90 per cent pure galena lead.

Some time later a number of other specimens were uncovered by John Flory, now deceased, while plowing in the field along the Columbia & Frederick branch of the Pennsylvania railroad. The tract is now owned by Mr. Loucks, and it is on this land where the search for the vein of lead is being conducted. A cave extending parallel to the Pennsylvania tracks to a depth of several hundred feet has been recently uncovered on the Loucks tract. The cave, which is of soft limestone formation, has been visited by hundreds of people from this city and surrounding territory. Some traces of lead have been found in the cave, it is said.