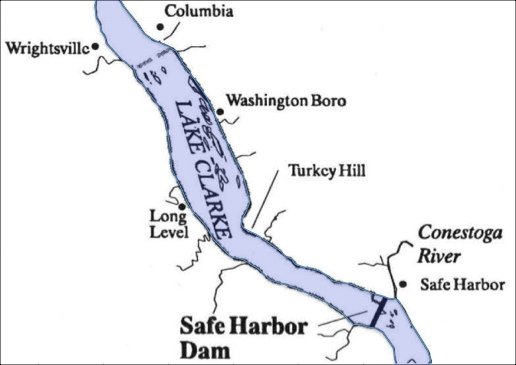 Twelve-mile long Lake Clarke at Long Level was formed in 1931 by the Susquehanna River backing up behind the 75-foot high Safe Harbor Dam.

Several times the question has been raised concerning the naming of Lake Clarke; most recently following my presentation at Shank’s Mare, at Long Level, this past Friday. This time, a search for the answer was successful. The Ancestry.com portal into Newspapers.com proved a successful combination to discover the man behind the Lake Clarke naming, but first some background history.

The planning to construct the Safe Harbor Dam started in 1929, with groundbreaking on April 1, 1930. The dam stretches 4,869-feet across the Susquehanna River near the village of Safe Harbor in Lancaster County. Building the dam and hydroelectric facility provided jobs for 4,000 workers during the early years of the Great Depression.

These photos in The Philadelphia Inquirer of August 9, 1931, show the Safe Harbor Dam nearing completion 16-months after work began. Lake Clarke started to fill during September of 1931 when the dam gates were initially closed. Hydroelectric power generation commenced in December of 1931. A present aerial view of the Safe Harbor Hydroelectric Station at the Lancaster County end of the dam is shown in the following photo.

Lake Clarke is named for Charles Edwin Fletcher Clarke, or as he used throughout his business career; Charles E. F. Clarke.

Quoting from the Lancaster New Era, issue of August 26, 1933, upon the death of Mr. Clarke: “Charles E. F. Clarke, president of the Pennsylvania Water and Power Company and of the Safe Harbor Water Power Corporation, died yesterday at his home at Rye, New York, after an illness of many months. Mr. Clarke headed the Pennsylvania Water and Power Company since 1914 and was president of the Safe Harbor firm since its incorporation in January 1930. Lake Clarke, formed by the damming of the Susquehanna by the Safe Harbor dam, was named for him.”

Lake Clarke impounds 41,000,000,000 gallons of water and has a surface covering ten square miles. The following diagram of Safe Harbor Dam and Lake Clarke is from a U. S. Geological Survey publication.

In addition to serving as President of the Pennsylvania Water and Power Company and of the Safe Harbor Water Power Corporation, Mr. Clarke was Chairman of the Board of the Eastern Rolling Mill Company and the Baltimore Tube Company. Charles also served as Vice-President of the Consolidated Gas Electric Light and Power Company of Baltimore; which helped finance the construction of Safe Harbor Dam and Hydroelectric Station.

Tickets are still available for an upcoming presentation:

First Working Canal in Pennsylvania was in York Haven
Was the Town of Pleasant Garden planned with a River Bridge in 1793?
Naming the Square in York
How Powder Mill Road got its name
U. S. Army General Hospital tied to Powder Mill Road