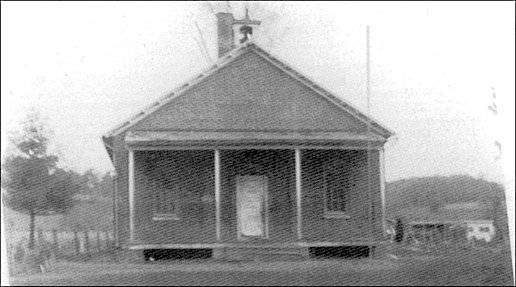 Tragedy befalls a teacher and later Mahlon Haines owned the Kreutz Creek One-Room Schoolhouse. These stories will be explored in this post that continues a series researching photos submitted by Elberta Sheffer of students in front of various One-Room Schoolhouses in York County.

Teacher Nora Stoner sits between Rosie Eppley and Anna Ruth as part of a Kreutz Creek School photo of students during 1904. Nobody was identified in the photo submitted by Elberta Sheffer, so how was that identification made?

The whole 1904 student photo at Kreutz Creek School in Hellam Township is presented as left and right sides to allow better resolution of the individuals. Beginning with the left side:

The York County History Center has two volumes of student photos from one-room schools; which are collected newspaper clippings. These photos had the students identified, by the submitter, prior to sending the photos to the newspapers for publication. That resource is a good starting point when trying put names to unidentified photos. However that resource did not work in this case.

I’ve discovered not every such newspaper photo was clipped for the York County History Center volumes. Such was the case for the photo submitted by Elberta Sheffer. Using Newspapers.com, I discovered the exact same photo, with student identifications, was published in The Gazette and Daily, issue of November 28, 1950:

Tragedy befell Nora Stoner as she mourned the awful death of her fiancée within days of their marriage. On March 9, 1913, J. Luther Gable had breakfast with the Stoner family and discussed last minute details for their marriage; after which he left Hallam on the trolley car bound for York. The trolley was packed, containing about 40 passengers.

As the trolley made the sharp turn onto the bridge over the Pennsylvania Railroad Tracks (i.e. the bridge on Pleasant Acres Road), Gable fell out of the trolley, over the side of the bridge, and onto the railroad tracks. Whereupon a train struck him, killing him instantly with his body badly mutilated.

This photo shows how Kreutz Creek One-Room Schoolhouse appeared in 1940. The old section of Kreutz Creek Cemetery comes within a few feet of the west side of the schoolhouse, as marked by the fence posts in the photo.

The schoolhouse was last used during the 1950-51 school-year. On July 28, 1951, the Kreutz Creek One-Room Schoolhouse was sold at public sale. The winning bidder at $4,500 was Mahlon Haines. His wife June had always admired that schoolhouse; he planned on it being an anniversary gift to her. The ultimate intended use is unknown or if any changes were made in preparation for their October 20th wedding anniversary.

UPDATE: Haines intended use of the schoolhouse is now known; see: Haines’ School of Brains at Kreutz Creek.

The Kreutz Creek One-Room Schoolhouse still stands as a private residence along Old Church Lane in Hellam Township. The following photo shows the west side of the building; i.e. the side facing the old section of the Kreutz Creek Cemetery.