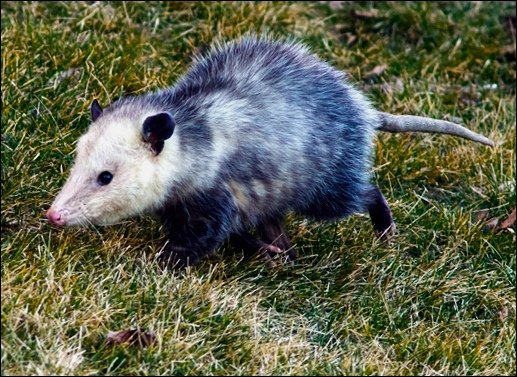 “Anthony Seiple was called ‘the king of possums’ during the early 1800s in the area currently named Pleasureville in York County, Pennsylvania. His barn, and to a lesser extent those of neighbors, such as Daniel Billet, John Meyers, and Jacob Kauffman, always contained scores of drying opossum skins.”

“The great road to Brillinger’s Mill passed by properties of Seiple, Billet, Meyers, and Kauffman. Travelers along that road, seeing all the drying possum skins, dubbed that small cluster of houses as Possumtown.”

“During 1849, Dr. George Conn moved to this area known as Possumtown. United Brethren ministers, including Rev. William Raber, commenced to preach in this community at the home of Dr. Conn in 1855. These services continued in the doctor’s residence until the first village church opened during 1861.”

“In preparation for this event, my pastor provided access to some old letters. Among them were letters of Rev. William Raber, with two during 1857; mentioning Possumtown. Now you know why Possumtown leaped out at me, as my York County spiel. Rev. Raber wrote Maria Conn, the doctors wife, despised the Possumtown name, bestowed by outsiders. In prior years she suggested a more pleasant name Pleasureville.”

“From those letters, by 1857 the Pleasureville name seems to have been universally adopted by those living in the growing community; however travelers through the area continued to make fun of the village by persisting to call it Possumtown.”

After hearing those words twenty years ago, I asked the presenter for a copy of her Possumtown spiel; which Ann Harris gladly provided in a handout. Ann noted the primary source on the back of the handout; however I also wanted to see those 1857 letters. The source is shared later in this post.

Is it possum or opossum? I noticed both spellings in Ann Harris’ spiel. The correct spelling for this, pictured, North American creature is opossum. Possum is slang for the same creature; that is known for eating garbage, looking like a big fat gray rat, and getting hit by cars. Nevertheless, there are nicer-looking tree-dwelling marsupials, native to Australia, correctly called possums.

At the 1997 family history conference in Philadelphia, Ann Harris provided short snippets of entertaining family history at her booth; all as documented in the writings of early leaders of the United Brethren Church. She emphasized not to overlook those church sources; written by men privy to the goings on of people in remote communities. On the back of the handout, were Ann’s notes about the Possumtown spiel source:

“During the years Rev. Eberly, Rev. Albright, and Rev. Brane were preparing the Landmark History of the United Brethren Church, Pleasureville had a short-lived post office called Springet. The history of the ‘Springet Church’ starts on page 176 of their 1911 publication.’”

“That book is the source for virtually everything in my spiel. For example the section on Springet Church begins with these three sentences: ‘Springet, known for years as Possumtown, later as Pleasureville, and now as Springet, is located two and a half miles northeast of York. Anthony Seiple lived at this place seventy years ago [i.e. 1841], where there were only a few houses, and the surrounding country was covered with a dense forest. His only occupation was [rac]coon and [o]possum hunting, and he was called the king of possums.’”

Unfortunately I filed that handout with all the other handouts obtained at the 4-day conference in 1997. When I recently discovered the handout, I realized a follow-up about those 1857 letters should have been made then, because now I’m having a difficult time tracking down Ann Harris. When successful in getting copies of those letters, they’ll definitely be posted.

The Springet Post Office was established November 28, 1891, with William Shepp the first postmaster. Other postmasters included Alvin Sipe, Charles Dietz, William Lehman and Aaron Lightner. That post office closed November 30, 1908; at which time Rural Free Delivery was provided to that area of the township from the Post Office in York. I’ve seen Springet spelled with both one and two t’s. Springet is the name used in all Post Office listings provided by the U. S. Government.

The following is what John Gibson had to say about the early history of Pleasureville; on page 610 of his 1886 History of York County, Pennsylvania:

“Pleasureville, known all over York County until a few years ago as ‘Possumtown.’ John Myers lived at the place half a century ago [1836], when there were only a few houses, and the surrounding country was covered with a dense forest. His only occupation was ‘[rac]coon and [o]possum hunting,’ and he had constantly nailed on the front of his house scores of opossum skins, and from this circumstance the town got its first name.”

With the similarities of wording to beginning of the Pleasureville article in the 1911 Landmark History of the United Brethren Church, it is evident that the 1886 Gibson article was a starting point for the ministers, to which they added extensive details about Pleasureville, sourced from pastors; who were privy to the goings on of people in that community.

I’ll provide the full Pleasureville article, from the 1911 publication, in a future post. Another future post will pinpoint the ca. 1840 property belonging to Anthony Seiple, the Opossum King of Possumtown.

Links to related Pleasureville posts include: