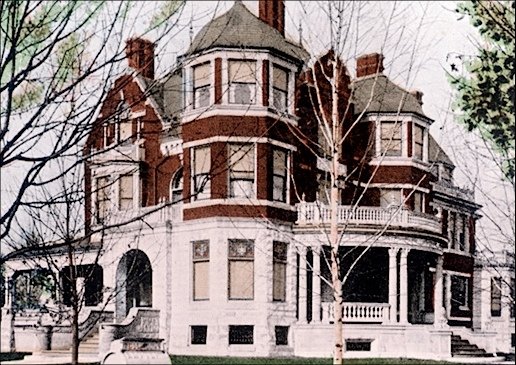 Congressman Daniel Lafean entertained two United States Presidents and many other notables at his mansion on the northwest corner of West Market Street and Richland Avenue. A listing of the foremost visitors, including leading state and national politicians, was recorded on a dining room keycard.

ClyTi Swartz submitted photos of the Keys and Dining Room Set; which belonged to Daniel Lafean. Quoting from ClyTi’s e-mail: “My Mom and Dad purchased it [the dining room set] from Dr. Landis. He was married to Daniel Lafean’s daughter. When Mom and Dad went to look at the dining room set, it was on the third floor of a house on West Market Street along doctors row. I think it was the 400 block. Their [Dr. & Mrs. Landis] son had polio. They said they were getting rid of it because they were building a house with ramps to accommodate a wheel chair for their son. They decided that they would sell it because they didn’t know if when their son got older if he would be interested in it.”

ClyTi also had some questions that intrigued me, so I did a little family history research to sort out the provenance of this dining room set; with this neat keycard:

Daniel and Emma Lafean did not have a daughter, so I searched for other possible Lafean family connections to Dr. Landis. A connection exists via a daughter-in-law of Daniel Lafean; i.e. Harriet Lefean, the wife of son Leroy Lafean. Harriet Lefean has a sister Eleanor who was married to Dr. W. Latimer S. Landes, who had home and offices at 454 West Market Street.

ClyTi Swartz submitted the following present photos of the buffet and one of the china cabinets. If any of my readers have interior photos of these inside the Daniel Lafean mansion, please send me an e-mail.

I attempted to answer the question; who wrote the names on the keycard? Per known handwriting samples, the keycard list appears to be started by Daniel Lafean; however it does appear to possibly be continued by someone else. I obtained the following handwriting samples for his wife and sons from Estate Files at the York County Archives; however I could only rule out Stuart Lafean.

The Daniel F. Lafean mansion, on the northwest corner of West Market Street and Richland Avenue, was built for Lafean in 1892; when he was 31-years-old. The family rooms on the first floor included: the Parlor, Dining Room, Music Room, Library, Tower Room, and Breakfast Room. The back yard of the estate bordered the Pennsylvania Railroad. In 1907, a private railroad station, attached to his carriage house, was erected for the Congressman’s use.

In 1936 there were plans to demolish the mansion of the late Daniel F. Lafean and build a theatre on the site. The theatre plans did not materialize, however in 1941, the residence was razed to make way for an American Oil Company gasoline service station on that corner. The Dispatch headlines on August 28, 1941 were: “Workmen Are Leveling D. F. Lafean Mansion; Former Show Place, Where Presidents Dined, Being Razed Today.”

Built in 1892 and razed in 1941; it does not seem right that such an impressive residence stood only 49-years. The service station that replaced the residence was demolished about 19 years-ago; standing about 60-years. The site is now a parking lot.