As soon as I saw this watercolor, that Cliff Satterthwaite entitled “Kauffman’s Orchards – York, Pa.,” I knew exactly where Cliff was standing when he painted this scene of a young apple tree. The downhill curving roadway into the York Valley gave it away; at least for someone familiar with the area.

The follow 1971 aerial photo is from the collections of the York County Archives. I’ve highlighted the boundaries of Kauffman’s Brookhill Orchards. The arrow at the letter (A) indicates Cliff’s viewpoint when he created his watercolor of a young apple tree. 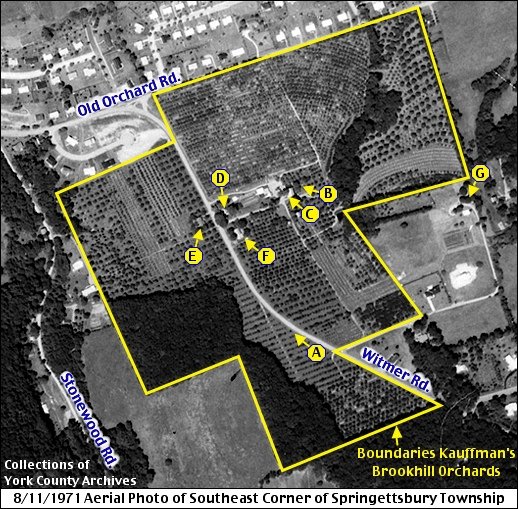 Here is a summary of all the pinpointed items from 1971: 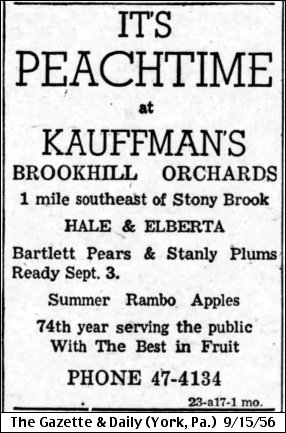 This 1956 Kauffman’s Brookhill Orchards ad noted “74th year serving the public with The Best in Fruit.” I had no idea Kauffman’s Orchard went back to 1882, until I saw this ad. A little research provided further details.

Eli F. Kauffman established the farm and orchard at this location in 1882. Eli was married to Alice Bentz. Additional details for Eli are provided in a 1905 newspaper article later in this post. Eli died in 1947 and his son, J. Bentz Kauffman, become the proprietor of the orchard.

Bentz was married to Martha Dietz. He was a graduate of York County Academy and attended Penn State. He was a past president of the National Peach Council and a member of the Pennsylvania State Horticultural Association. Bentz died in 1975 and his sons, Robert and Harry Kauffman continued operating the orchard for several additional decades until the land was developed.

The residential development is called Orchard Hills. Site work on grading the lots and putting in the initial streets began in 2003. The end of 2004 saw the initial five houses completed. Orchard Hills ended up with slightly more than 100 lots. Continue reading for additional details, plus more orchard artwork by Cliff Satterthwaite.

The following 2015 Bing.com Aerial Photo is of the southeast corner of Springettsbury Township. This view captures the same area shown in the earlier 1971 aerial photo. I’ve highlighted the boundaries of the former Kauffman’s Brookhill Orchards. 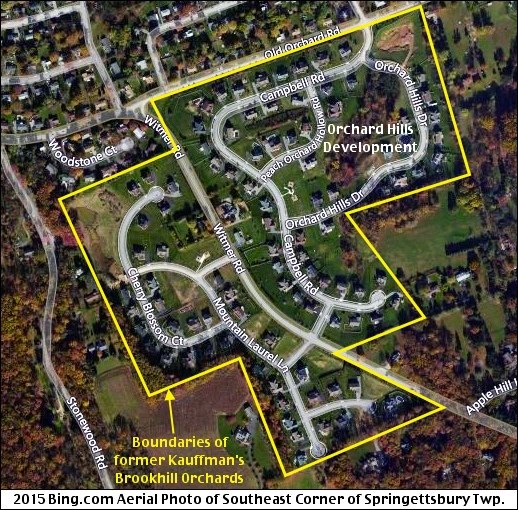 Cliff Satterthwaite entitled his following artwork, “Apple Picker’s Yarn.” Those steps look very familiar to the steps in the sales area of Kauffman’s Orchard. My uncle, Austin Markey, regularly picked fruit at Kauffman’s; he worked the night shift at Caterpillar and picked fruit by day. If any of my readers have Kauffman’s Brookhill Orchards stories, please post your comments. 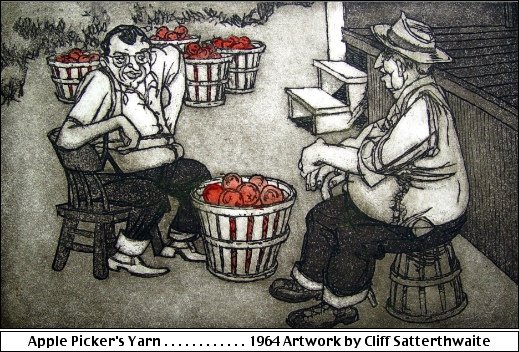 The St. Louis World’s Fair of 1904 was previously discussed under its official name in my post William H. Raab Cigar Factory in Dallastown; Bronze Medalist at Louisiana Purchase Exposition. The following article, from the February 20, 1905, issue of the York Daily, notes that Eli F. Kauffman, was awarded a silver medal at this exposition in St. Louis. 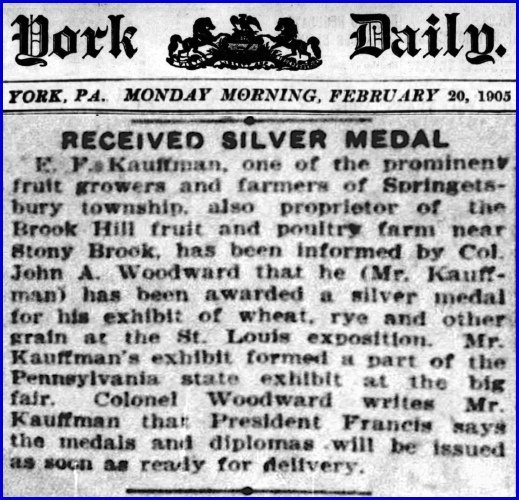 In 1905, Eli F. Kauffman is, “one of the prominent fruit growers and farmers of Springettsbury Township, also proprietor of the Brook Hill fruit and poultry farm near Stony Brook.” He exhibited “wheat, rye and other grain at the St. Louis exposition,” for which he won the award.