For half-a-century Karl S. Ort operated a successful York County business selling aviation merchandise, aircraft parts and war surplus materials. Nevertheless, Karl Ort became York’s aviation pioneer years before that business. He was a WWI trained pilot that barnstormed up and down the eastern seaboard. Karl Ort was born in York on December 19, 1896 and he was the thirteenth pilot licensed in Pennsylvania.

The barnstorming led to a string of flying related concerns, prior to the founding of his mail order aviation business. That establishment commenced in January of 1930 when Karl Ort attended an auction held at the Philadelphia Navy Yard; where he was the winning bidder on large quantities of government surplus aviation equipment. The cover of the 1935 KARL ORT Mail Order Catalog contained the slogan “You Can Bank on Karl Ort for Value.” Karl operated his business in the city of York, near his boyhood home, until a 1947 fire destroyed his warehouse in the 600 block of West Poplar Street. Ort reestablished a warehouse at the York Airport, in Thomasville; taking over the old original aircraft hangar and operating there until 1980. In his tenth year of retirement, Karl Stanford Ort passed away on December 26, 1990, at the age of 94.

Karl Ort applied for the Air Service at the onset of World War I. He was accepted for flight training and received ground school instruction at Princeton, New Jersey. During 1917 and 1918, his flight training was carried out at Love Field in Dallas, Texas. The armistice was signed before Karl had a chance to go overseas and fly in combat, nevertheless Ort’s skills were judged high enough to receive advanced training at Gerstner Field in San Diego, California. Karl was discharged as a 2nd Lieutenant on January 11, 1919. Ort had amassed over 400-hours of flight time while serving with the Army Air Service.

Civilian aviation jobs were few and far between, however Karl Ort could not see himself doing anything other than flying. Like many ex-Air Service pilots, as soon as he saved enough to obtained a WWI surplus airplane; he did and went barnstorming. He flew up and down the eastern seaboard, landing in fields from town to town, performing aerial stunts and giving rides to pay his way. Claude Martin was one of the men that performed with Ort. Martin’s specialties were wing-walking, acrobatic stunts while hanging under the airplane’s landing gear and parachute jumping. Newspapers reported Karl Ort did the tail spin and “loop the loop” with great proficiency.

In 1921, Karl Ort and Dan Dance became the proprietors of the Dauphin Flying Field at 24th and Derry Streets in Harrisburg. The reopening of that flying field occurred on May 22, 1921. Karl took the place of Walter Shaffer, who previously operated that flying field in 1920 with aircraft mechanic Dan Dance. The following are typical ads for “Safe and Sane Airplane Rides with Lieut. Karl Ort.” Karl had quite the reputation for his daring aerial feats. The “safe and sane” line was to assure passengers he would behave while flying them. 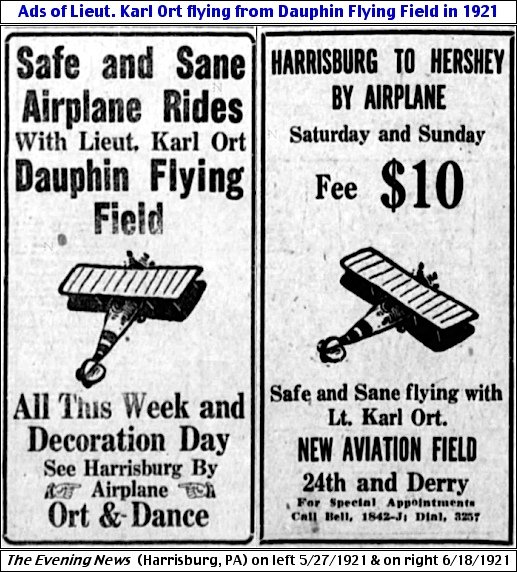 Airplane crash landings were much more common in the early days of flight. Skilled mechanics and pilots often bought such planes to repair and reassemble. Karl Ort was partnering with W. C. Metzger in such an undertaking, as noted in the following Harrisburg newspaper article in the May 13, 1922, issue of The Evening News.

A De Haviland airplane is being assembled at the Northwest Garage of W. C. Metzger, and within the next week it is expected to be taken to the Dauphin Flying Field and tested.

Karl Ort, of York, former lieutenant in the Air Service, is helping to supervise the work on the big ship and he is to do flying here. Metzger, who is the local distributor of Roamer autos, and Ort are interested in making aerial photos and photo maps and some photographic work is to be done as soon as the ship has passed the test.

Karl Ort also discovered good money could also be made doing aerial advertising. One stunt involved dropping a smoke bomb, only big enough to burn itself out before hitting the ground, which was the attention grabber for advertising circulars that were then dropped. Another of his favorite gimmicks was to fly over a town and toss out cigar samples attached to small parachutes. John F. Reichard’s cigar company in York employed Karl Ort full time, in excess of a year, spanning 1923 and 1924.

Details on the extent of the cigar advertising campaign are provided on page 69 of Volume 16 of Aviation Week, a publication from early 1924. Quoting a paragraph from that article:

In this work for the cigar company pilot Karl S. Ort, formerly an Air Service lieutenant, has flown 22,000 mi. over twenty-two states in 400 hr. flying time, during a period of nine months. Pilot Ort, who returned to his home at York for Christmas, resumed the cigar company’s advertising campaign in the South the first of the year.

I’ve shown Karl Ort’s page 63 listing superimposed over the cover of the 1926 Aircraft Yearbook. This 331-page yearbook was published by the Aeronautical Chamber of Commerce of America to promote the business of aviation and it reviews all aspects of aviation in the past year. The yearbook was published during May of 1926, therefore the period of inclusion is generally early 1925 through early 1926. 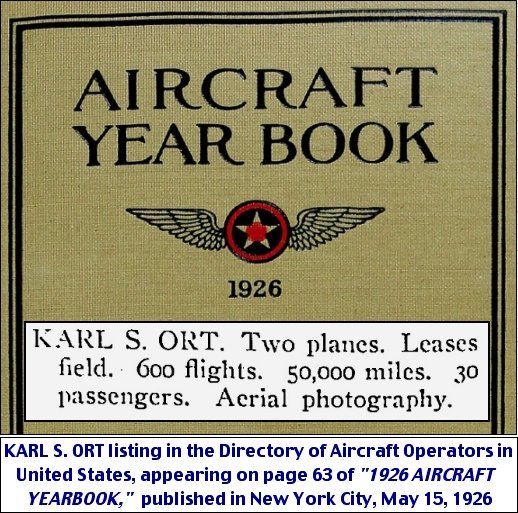 Karl S. Ort is listed as an aircraft operator on the Pennsylvania page. He owns two planes and leases the airfield he flies from. John F. M. Wolfe notes on page 173 of his book “Profile of Aviation in York County, Pennsylvania, 1925-1998” that Stony Brook Army Air Field opened on July 28, 1925 and that Karl Ort flew from this field. This airfield was established as an emergency landing airfield for military pilots flying between Washington D. C. and Olmsted Field at Middletown, PA; however private pilots were also allowed to use it via a lease arrangement.

The 600 flights and 50,000 miles are lifetime aerial listings for Karl Ort; a big part is attributed to all of his aerial advertising campaigns. The 30 passengers references the total passengers carried, to date, in the current enterprise. Karl Ort is now focusing on aerial photography. In future posts I’ll examine a few of the extensive collection of Karl Ort’s aerial photographs that is housed in the Archives of the York County History Center.

I’ve previously written about Karl Ort in the post: Exercising Buffaloes via Airplane in Springettsbury.  That post deals with some 1926 aerial exploits for Karl and details the location of the Stony Brook Army Air Field; established in 1925.

In 1928, Lester Durand Gardner compiled Who’s Who in American Aeronautics. An entry for Karl S. Ort is included on page 89; that entry will be shared in a future post.