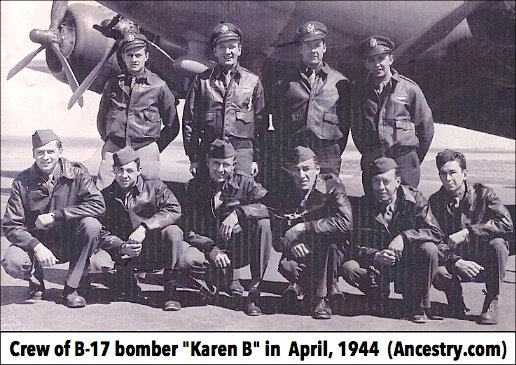 York Corporation employee Robert W. Zercher became a Ball Turret Gunner during WWII in which a downed B-17 bomber led to his tragic murder by the Nazi SS.

The B-17 bomber Bob Zercher served on was named the “Karen B.” The crew of the “Karen B” is shown in the group photo during April of 1944; prior to their fateful bombing mission of the Railroad Station in Berlin on April 29th, 1944.

The nose art and positions of the 10-man crew of a B-17 are from the web site of the American Air Museum of Britain. I’ve made it specific to the “Karen B” per details on that museum’s web site. The age of each of the crew is per my research on Ancestry.com. The average age of the crew is 25-years-old, with Bob Zercher the oldest at 36-years-old.

My post about the B-17 Flying Fortress, The Memphis Belle, which completed 25 missions and was cycled back to the States for a war bond drive, produced much feedback. The general reaction was more emphasis should be placed on the brave crews of all the downed planes. In my replies, I brought up the story of Robert Zercher. Several readers wanted to know more, so I directed them to three posts by Jim McClure:

I’ll share a little from two readers, with which I’ve exchanged multiple e-mails. Steve Snyder is Past President of the 306th Bomb Group Historical Association. He wrote the award winning book “SHOT DOWN: The story of pilot Howard Snyder and the crew of the B-17 Susan Ruth.” It tells about the experiences of the crew being helped by Belgian patriots who risked their lives to help them. There are many similarities with the “Karen B” crew and the Dutch Resistance.

Jim Kohler noticed Robert Zercher appeared in the index of one of his books “The Long Road—Trials and Tribulations of Airmen Prisoners,” published in London, during 2013, by authors Oliver Clutton-Brock and Raymond Crompton. After reading the McClure, Reitsma and Ramlow posts, he noticed new details in that book and since only four paragraphs were related to Zercher, he submitted them in case they might shed light on further research:

“From pages 107 and 108 of “The Long Road—Trials and Tribulations of Airmen Prisoners,” published in London, during 2013, by authors Oliver Clutton-Brock and Raymond Crompton:”

“Bob Zercher was the ball-turret gunner of B-17G 42-39920, ‘Karen B,’ 452nd Bomb Group, 729th Bomb Squadron, that had been hit by flak over Berlin on 29 April 1944. With No. 2 engine badly damaged ‘Karen B’ limped back towards its base at Deopham Green, England, but when two more engines malfunctioned the pilot, 2nd Lieutenant Hal J. Nelson, ordered his crew to bale out. Nelson eventually put the bomber down, while he still had some control over it, at 1.30 pm at Het Vellert, some five kilometers south of Ruurlo with the crew still aboard. No-one was injured.”

“A member of the Dutch Resistance, Hendrik Wieggers, took the crew to safety. Bob Zercher and four others went to the Slagman family in Harfsen until, in the middle of August 1944, Bob found himself on his own at the home of Mrs. Meijer de Vries on the Jachtlaan, Apeldoorn, blissfully unaware of the tragedy that would shortly unfold.”

“Dutchman Willem l’Ecluse, a member of the Narda group, was in hiding to avoid being called up for forced labour in Germany, but was arrested and, possibly under torture by the Sicherheitsdienst (SD), betrayed the Narda group. In the late afternoon or evening of 30 September, SS-Hauptsturmfuhrer Karl Fielitz and his second-in-command, SS-Untersturmfuhrer Hubert Wigger, both from the SD’s Antwerp office, caught the Narda group at the house at Paul Krugerstraat 30, Apeldoorn: Wim Aalders (born 18 February 1914), Jan Barendsen (11 September 1882), Reinier van Gerrevink (4 March 1907), Wim Karreman (5 August 1925), Jan Schut (8 June 1918) and Hans Wijma (5 February 1917). By way of a bonus they got Ken Ingram and Bob Zercher, who just happened to be in the house at the time. In the confusion one of the Narda group, Joke (Joop) Bitter, son of Mrs. Bitter-van de Noordaa, slipped away.”

“The matter of what the SD should do with their captives was referred to SS-Obergruppenfuhrer Hanns Albin Rauter, SS-General and Hoherer Polizeifuhrer, who was in command of both the Waffen-SS, the ordinary police, and the SD in The Netherlands. It was on his orders that the two airmen and the six members of the Narda group were taken to the back garden of the SD HQ at Van Rhemlaan 9, Apeldoorn. There, at about 7 am on the morning of 2 October, they were shot by a company of NCOs recruited from a Waffen-SS Landesschutzen-Battalion. Their bodies were left at various points on the streets of Apeldoorn with the label ‘Terrorist’ around their necks. Ken’s was put by the Deventerstraat bridge over the Kanaal Noord, and Bob’s some 400 meters away on the same street near Hoofdstraat, opposite the post office.”

Being at the wrong place at the wrong time, plus the ruthless Nazi SS, resulted in the tragic murder of Robert Zercher. His body was eventually buried in a local cemetery. Jelle Reitsma’s manuscript tells the rest of the story:

“On February 1946 the American Eldon Soper of the Judge Advocate Section ordered the remains of Bob Zercher to be exhumed and to be examined more closely. As cause of death a bayonet stab dealt with much violence was concluded. That does not fit in with the reconstruction of the assassination according to the interrogation reports of the SD-men and Willem l’Ecluse who were involved in the execution. From the interrogation reports it is evident that Kenneth Ingram and Bob Zercher were shot. Afterwards Bob Zercher was reburied at the American war cemetery Neuville-Condroz (Neupré) in the Belgian Ardennes.”