July 1970 Airplane Photo of Hallam and The Hellam Hills 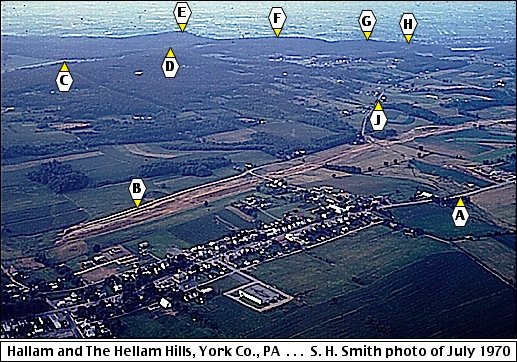 During July 1970, I took this aerial photo of the eastern end of Hallam. I’ve pointed out a few of the Hellam Hills in the background and beyond them is Lancaster County. My brother, Stanley, had just recently got his private pilots license and on several occasions, I took a ride with him and snapped a few photos.

I was going through my collection of old 35-mm slides when I got a question from Bill Lehman about the Hellam Hills. Bill wanted to know how many hills make up the Hellam Hills. Within a day of that question, this slide showed up in my viewer. I could clearly identify six summits; labeled (C) through (H). The next step was to look at a topographic map; to determine the field of view of the photo. 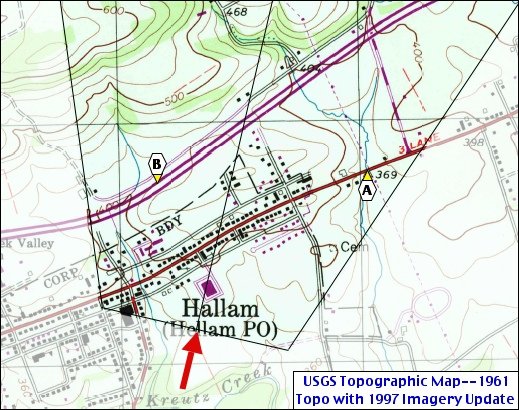 I annotated this section of the USGS Columbia West Quadrangle to show the viewpoint (red arrow pointing nearly northward in lower left) and field of view of the aerial photo. This USGS Topographic Map has imagery updated to 1997, which is anything added in purple, on the original topography compiled in 1961. Therefore the new four-lane Route 30 (B) shows up as purple on this topographic map. That is because my aerial photo shows the earth was just starting to be moved (B), during July 1970, to construct the new four-lane Route 30 north of the Borough of Hallam.

In the lower half of the photo, Route 462 (A), starting at the left side of the field of view, extends from Prospect Street to Wilson Lane in the eastern part of Hallam, and continues eastwardly in Hellam Township to the new Accomac Road. The large purple building, just above the Hallam label, now houses the Simplex Paper Box Corporation; on the southwest corner of South Friendship Avenue and East Beaver Street. The Route 462 label (A) is at the stream just east of Hallam, this location has a benchmark elevation of 369-feet above sea level; likely the lowest elevation visible in the aerial photo.

The following section of the same topographic map takes a longer view to include the Hellam Hills. Several features and eight summits have been identified with labels, those in the field of view correspond directly to the labels on the July 1970 aerial photo. 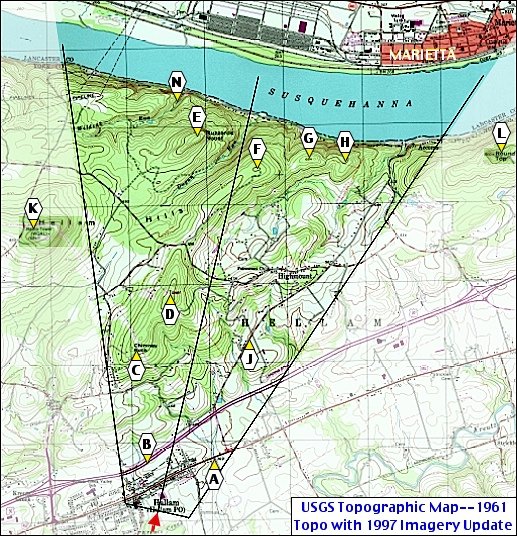 The USGS description of the “Hellam Hills” label, on topographic maps, notes a group of hills in Hellam Township generally extending from the 1054-foot summit, where the WGAL Tower is located, to the 800-foot summit named Round Top. Note that the “Hellam Hills” label begins immediately to the right of the 1054-feet summit (K) and points towards Round Top (L). Both (K) and (L) summits are outside the field of view of the aerial photo, however with the six summits inside the field of view, that makes eight major summits in the Hellam Hills. Here is a summary of the labeled features and summits, with elevations above sea level. 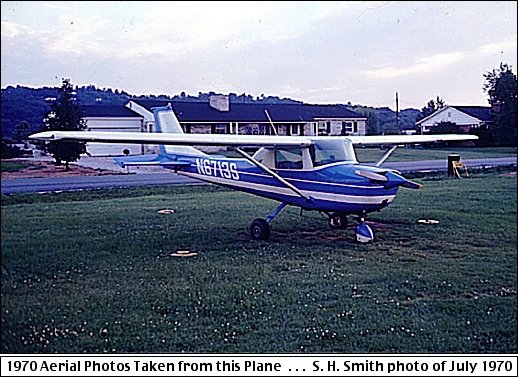 This is the airplane that Stanley usually rented during 1970 and 1971; it was based at Capital City Airport in Northern York County. In future posts look for more aerial photos that I snapped from this plane.

My grandparents had a bungalow along the Susquehanna River, immediately down the steep slope from summit (G); take my word for it, that was a mighty precipitous hillside to climb.   Related posts about this bungalow include: