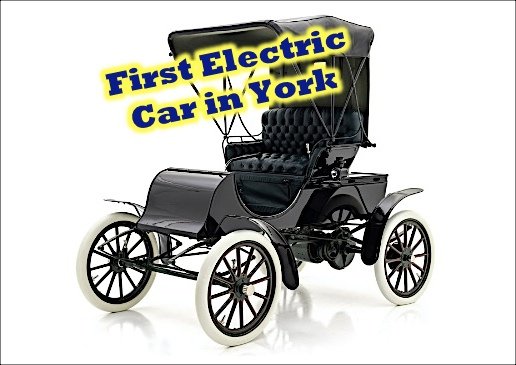 John P. Julius got into the retail music business during 1884; and some Yorkers probably remember Julius Music still operating at multiple locations into the 1970s. In 1905, J. P. Julius was first owner of an electric car in York. Julius Music sold the first radio purchased in York during 1924.

A York news article of August 24, 1905, notes: “John P. Julius received yesterday a Pope Waverly electric coupe automobile. The machine is the first of the kind to arrive in York.”

Catalog illustrations of the 1905 Pope Waverly electric coupe automobile appear very similar to a 1906 Pope-Waverly Electric Automobile; which was recently sold by Hyman Ltd., who specialize in providing assistance in buying & selling rare and unusual cars.

The steering in the 1906 Pope-Waverly Electric Automobile is done via the centrally mounted tiller. The foot controls are for the throttle and brake. The status of the battery is monitored via a combination volt & amp meter.

The DC motor in the 1906 Pope-Waverly Electric Automobile is mounted at the rear axle. The batteries are above the motor in a compartment. Mechanical drum brakes aid in stopping, and suspension is via elliptical springs.

An April 13, 1940 article in The Gazette and Daily recalled the sale of York’s first radio set; costing $224 at Julius Music: “Radio entertainment, which we now take entirely for granted, was a thing unknown in the early history of the Julius Music House. The present business was founded by J. P. Julius in 1884, and continued under his management until 1911. The store was located on [22] South George Street in what is now the Rothert Building. In 1911 the business was taken over by B. C. Julius and Oliver L. March. When the partnership was dissolved in 1925, B. C. Julius became the sole owner. The present building [141-143 West Market Street] was occupied in 1928.”

“Although the radio business was begun in 1925, the first radio sold by the Julius Music House dates back to 1924. The purchaser of the first set was Melvin Fischer.” “It operated on regular dry cell batteries and small, peanut-shaped tubes. Reception was limited to two stations: WSM in Atlanta, Ga., and KDKA in Pittsburgh. Occasionally WGY in Schenectady could be heard, but only dimly.”

John P. Julius died January 15, 1927, at the age of 62 years old. The second-generation owner was his nephew; Bertius C. Julius, who is the son of George D. Julius, which is John’s brother.

The fourth-generation, J. Philip Julius, son of Stuart, became President of Julius Music House in 1973. At that time the York location was at 143 West Market Street and the Hanover location was in the North Hanover Mall. The Julius stores sold an assortment of musical instruments, music accessories, pianos, organs and sheet music. Julius Music went out of business in 1976, during its 93rd year of existence.