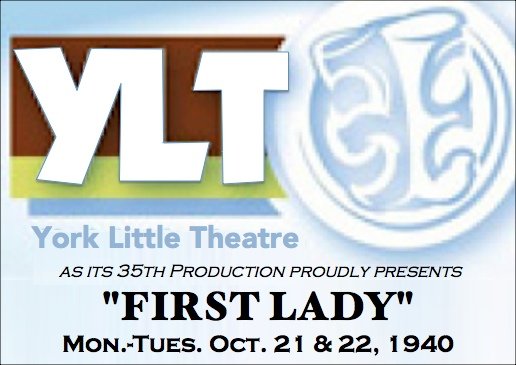 The father of Presidential candidate Joe Biden had a prominent role in a York Little Theatre production featuring feuding women conspiring to become First Lady. York Little Theatre, as its 35th production, presented “First Lady” on Monday and Tuesday, October 21st and 22nd, 1940. It was billed as an “amusing play about women in politics; but NOT a political play.”

In a previous post a chance discovery revealed the father of Presidential candidate Joe Biden worked as a clerk-typist for the American Oil Company Bulk Plant along Hill Street in Spring Garden Township, York County, Pennsylvania.

From August of 1939 thru October of 1940 records consistently record the residence of Joe Biden, Sr. is the York Y.M.C.A. At the time, Joe Biden, Sr. was 24-years-old, which is one year before he married and two years before the birth of Presidential candidate Joe Biden, Jr.

Many of the comments relating to the original post were constructive, while some were not. I found one comment particularly intriguing; a recollection Joseph Biden was actively involved with the York Little Theatre in late 1940 or early 1941. Previous research only revealed involvement in short plays as part of the Y.M.C.A. Dormitory Club.

I decided to search in the opposite direction of my previous post; i.e. going beyond the October 16th, 1940 date when Joseph Biden, Sr. registered for the Draft in York, PA. I did not have far to look, in discovering Joe Biden, Sr. played a prominent role in a York Little Theatre production on October 21st and 22nd, 1940.

The play “First Lady” was written by George S. Kauffman and Katherine Dayton. “First Lady” opened November 26, 1935 at the Music Box Theatre in New York City and ran for 246 performances. The play was later adapted as a film by Warner Bros. in 1937.

A brief summary of the “First Lady” play from a George S. Kauffman web site—A feud has existed for years between the manipulative Irene Hibbard and her rival, Lucy Chase Wayne, one of Washington’s most elegant and quick-witted hostesses and wife of a Cabinet official. When both women try to put forward the men in their lives as a possible presidential candidate, the feud becomes all-out war. Irene wants to back a handsome bachelor Senator (and divorce her husband after the election), while Lucy hopes to become First Lady by supporting her own husband.

The York Dispatch review of opening night appeared in their issue of October 22, 1940. That review includes: “Joseph Biden as ‘Carter Hibbard’ reveals an astonishingly accurate appreciation of his difficult role, and with this debut becomes one of the Little Theater’s most promising performers.”

Sometime after November 18th, 1940, Joseph Biden is working as a salesman for the American Oil Company, based in Harrisburg.