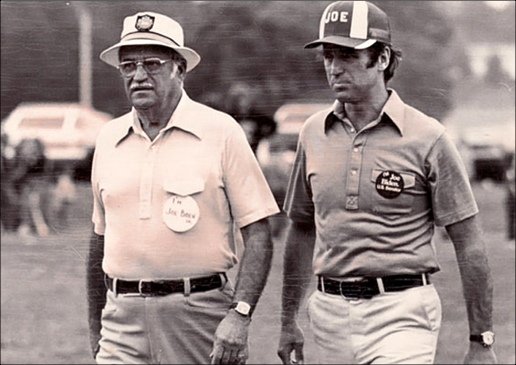 The father of Presidential candidate Joe Biden worked as a clerk-typist for the American Oil Company Bulk Plant along Hill Street in Spring Garden Township. At the time, Joe Biden, Sr. was 24-years-old, which is one year before he married and two years before the birth of Joe Biden, Jr.

I was doing some WWII family history research via Draft Registration Cards in the York area and stumbled upon the following card. I wondered if Joseph Robinette Biden is any relation to Presidential candidate Joe Biden. Indeed he is! He is Joe Biden’s father.

Per his registration for the draft on October 16, 1940, Joe Biden, Sr. is working for American Oil Company in York, located at Hill Street and the Ma & Pa Railroad. The address of his father, Joseph H. Biden, is crossed out and replaced with Y.M.C.A., York, PA.

The American Oil Company Bulk Plant was located at 385 Hill Street; which is between the Ma & Pa Railroad and Spahn Avenue in Spring Garden Township. The following present view shows that property, on which Amoco closed this Bulk Plant in 1962. From that plant, upwards of one million gallons of fuel products and lubricants were distributed each month.

It appears that for at least 6-months, April thru October of 1940, Joe Biden, Sr. was living at the Y.M.C.A. Dormitory, while working at the Amoco Bulk Plant along Hill Street as a Clerk-Typist.

The earliest Joe Biden, Sr. appears in York per local newspapers is August 21, 1939, when the York Dispatch reported: “Joseph Biden, a resident of the Y.M.C.A., has returned from Baltimore, where he was the guest of relatives and friends.” Therefore he could be residing at the “Y” for 14 months, August of 1939 thru October of 1940.” During that time span Joseph Biden appears in a number of plays, presented around the city, in which he is noted among the members of the Y.M.C.A. Dormitory Club.

I started checking directories, on Ancestry.com, to see how early Joe Biden, Sr. was in York. The 1940 Census notes Joe Biden, Sr. is living in Scranton on April 1, 1935. He just recently moved there per the following directory listings during the 1930s:

Directories are compiled during November and December of the prior year. Therefore sometime between January 1939 and August 1939, Joseph R. Biden moves to the York Y.M.C.A.

Following the approximately 14-months in York, Joseph R. Biden, Sr. is working as a salesman for the American Oil Company, based in Harrisburg. Upon his marriage to Jean Finnegan on May 30, 1941, at Scranton, The Tribune reported: “Mr. Biden is a graduate of St. Thomas High School and attended Johns Hopkins University. He is a salesman for the American Oil Company.” “They will reside at 1739 Herr Street, Harrisburg.” Thus the one-year of college, reported in the 1940 Census, was attending John Hopkins University.

Joe Biden, Sr. next becomes salesman for the American Oil Company, based in Baltimore. Per the following article in The Times-Tribute, Scranton, PA; it appears Joe Biden, Sr. is still based in Baltimore as of November 20, 1942, when Joseph Robinette Biden, Jr. is born in Scranton. Were they just visiting the wife’s parents and the baby came early?