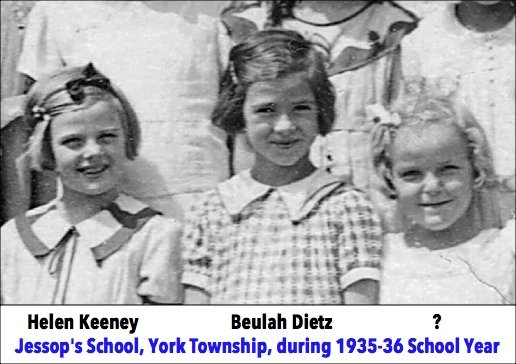 First grader Beulah Dietz stands between Helen Keeney and an unknown girl in this photo. It is a zoomed in section of a postcard showing all the 1935-36 school-year students in front of Jessop’s One-Room Schoolhouse in York Township, York County, PA [Photo submitted by Beulah (Dietz) Stump]
Posted by Stephen H. SmithMarch 5, 2020March 19, 2020 All Posts, Buildings, One-Room Schools, Pennsylvania, York County

Beulah (Dietz) Stump shared a photo of 1935-36 school-year students in front of Jessop’s One-Room Schoolhouse in York Township. Beulah Dietz is in the first grade. Older sister Kathryn Dietz and older brother David Dietz also attended that same year; all in one room. This post also explores the early history of Jessop’s School.

Teacher Jacob L. Steinfelt is at the right front in the complete photo. He was Beulah’s teacher for first through sixth grades at Jessop’s School. Upon his retirement, Mr. Steinfelt had taught for 43-years in York Township schools. Helen L. Fulton taught Beulah for her final two years at Jessop’s.

There was an examination given at the end of the eighth grade to determine if students could proceed to high school. Beulah passed and attended York City schools; graduating with the Class of 1947 from York High.

Beulah recognized many of the students in the 1935 photo. If any of my readers can name any of the unidentified students, please E-mail me. The photo is separated into a left and a right side, in order to display and identify individuals at a bigger scale.

I was questioned if Jessop’s School was named for Jonathan Jessop, the man responsible for the York Imperial variety of apples. Those details are summarized on the historical marker, dedicated in 1948, when it was placed along South George Street near Monument Road, in York Township.

The school was possibly named for Jonathan Jessop [1766-1856]. However it was his son Edward Jessop [1810-1878], and wife Mary, that sold the quarter-acre lot, six-months prior to the death of Edward Jessop, where the present repurposed Jessop’s schoolhouse still stands at 93 Monument Road.

That deed, of a lot, to the Directors of the Common Schools of York Township was made in November of 1877; therefore the schoolhouse was likely built early in 1878; in time for use during the 1878-79 school year. The Jessop’s school lot was later expanded in October of 1914, when John C. Schmidt, and wife Anna, sold an adjacent quarter-acre piece of ground to the School Directors.

Looking for the “Built in 1802” Primary Source

Was this potentially an 1802 private school for Jonathan Jessop’s children and grandchildren? Jonathan married Susanna in 1794, so 1802 seems about correct for such a private school; however, if so, it must have ceased by 1860. Since a schoolhouse, located on Grantley Road in York Township, does not appear on Shearer’s 1860 Map or Beach Nichols 1876 Atlas of York County. Both these map sources have only “E. Jessop” on what was Jonathan Jessop’s land, in that vicinity.

If Jessop’s was not built until 1878, where did students in vicinity of Grantley Road and Monument Road attend school? Ness’ One-Room Schoolhouse was one of the early common schoolhouses in York Township; i.e. it appears on both 1860 and 1876 maps. Ness’ was located along Pine Grove Road, about three-quarters of a mile southeast of Jessop’s; which is easily within the one and one-half mile maximum walking distance typically used by school directors.

After the 1878 Jessop’s Schoolhouse was no longer required for schooling purposes in 1950, litigation was involved to allow it to be sold. The findings of that court action was reported in the York Dispatch of June 6, 1951; where that action stated: “There is a one room brick school house of substantial construction on the land, which was not there when it was conveyed to the school board.” referring to the conveyance by Edward and Mary Jessop during November of 1877; in previous paragraphs. Therefore the former schoolhouse, which stands today at 93 Monument Road and as shown in the following March 2, 2020 photo, was built about 1878, and not 1802.

The former schoolhouse is presently utilized as a space for jobsite construction offices during the Wellspan Health Campus expansion at Apple Hill. The following photo shows the same view of the building; as Jessop’s One-Room Schoolhouse. When the building was repurposed as a residence, the disproportionately tall brick vestibule was removed; replaced by a small covered porch.