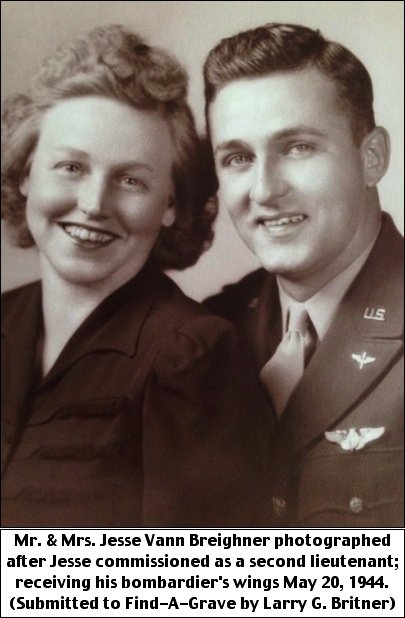 The 1942 “York Plan” movie had a local star in York Safe and Lock’s machinist Jesse Breighner, who appeared in about 20 scenes. After which Jesse enlisted; becoming a decorated navigator-bombardier in World War II, Korea and Vietnam.

This post also looks at the repository of that “York Plan” film. The following picture shows Mr. and Mrs. Jesse Vann Breighner; photographed after Jesse was commissioned as a second lieutenant, receiving his bombardier’s wings on May 20, 1944.

The repository for the 1942 movie, highlighting York’s war materials production plan, has a high probably of being the Special Media Archives Services Division located in The National Archives at College Park, Maryland. I was told that film is likely housed in their 111 or 179 record groups.

Record Group 111 contains Records of the Office of the Chief Signal Officer. Specifically the “York Plan” movie might be in RG 111.9: “The War Films series consists of incentive films for war industries, many with good combat footage. These films demonstrate the relationship of industrial war workers to fighting men and include footage of actual and staged events. All have a similar theme, showing the necessity for high production and for all kinds of supplies, from lumber, cotton, and gasoline to B-29 bombers. National Archives and Records Administration has 56 issues, ranging from 6 to 27 minutes each.”

Of the two record groups, the suggestion was to check group 111 first. The following is a photo of The National Archives at College Park. The present Government Shutdown has closed all National Archives facilities; therefore the continuing effort to track down the 1942 “York Plan” movie is presently on hold.

Jesse Breighner was born June 16, 1917, in Frederick, Maryland. At a young age, his parents, Mr. & Mrs. Lester R. Breighner, moved to 129 Hamilton Avenue; located just west of North Beaver Street on the north side of the Codorus Creek in York. Jesse is a 1934 graduate of William Penn Senior High School. Jesse married Trudy Keister in York on July 28, 1940.

An article in the September 5, 1942, issue of The Gazette and Daily in York, PA, was entitled “Defense Plant Worker Is ‘Star’ Of Army Movie Being Made Here.” Quoting that article:

“How does it feel to become a movie player by accident?”

“Jesse Breighner, 25-year-old lathe operator at the York Safe and Lock Company, ought to know. Jesse has the most important local role in the movie being made in York by the War Department.”

“He ‘just happened’ as a movie player when Lieut. General William S. Knudsen informed York industrialists that he planned to inspect plants here. Director Robert J. Flaharty wanted to have the movie camera record a meeting between General Knudsen and a York worker. ‘Jess’ was picked and from then on he has been in front of the movie camera frequently.”

“Jess has had no previous experience in the acting business. ‘Oh, I was in a Junior High school play once,’ he said yesterday while on location in the 100-block of North Albemarle Street. The crew, of 15 U. S. Signal Corps and civilian employees, were shooting a sequence for the film which will show to the nation’s movie goers how York is setting the pace for war-time production.”

“Young Breighner, who is a ‘natural’ in front of the camera, according to those making the film, and who lives at 129 Hamilton Avenue, appears in about 20 scenes of the movie.”

Following his acting gig, Jesse enlisted and graduated from the Air Forces Bombardier School at Childress, Texas, were he received his bombardier’s wings on May 20, 1944 After which he completed his aerial observer and celestial navigator training at Ellington Field, Texas.

Jesse’s initial overseas service was in missions out of an airfield in Norway, however he spent the majority of his time overseas in the Pacific Theater of Operations during WWII. Lt. Breighner was recalled to duty in October 1951 and flew on 50 missions in the Korean conflict; where he received the Distinguished Flying Cross. In 1968, Lt. Col. Jesse V. Breighner was decorated with the Bronze Star medal for meritorious service while engaged in military operations out of Tansonnhut Air Base in Vietnam.

Lt. Col. Breighner was stationed in Hampton, Virginia when he retired from the military in 1975. That is where he retired and passed away on August 11, 2001. Jesse is buried in Mount Rose Cemetery, Spring Garden Township, York County, PA.

In 2001, Jesse had two surviving children; his daughters Jane M. Blackmon of Dallas and Shelley V. Anderson of Yorktown, VA. Maybe one of them has stories told to them by their father Jesse; the York Safe and Lock Company machinist, who made numerous appearances in the 1942 “York Plan” movie.