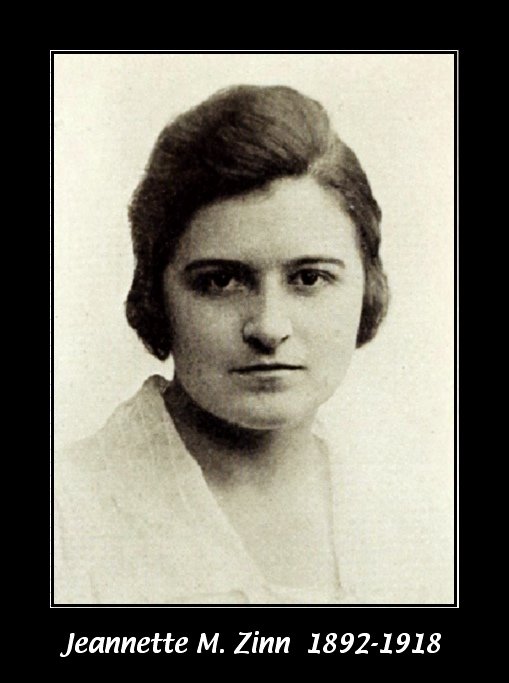 Jeannette Zinn is one of 197 York County patriots who gave their lives in national service during World War I. Her name is included among the four WWI panels fronting the columns of the former York County Court House; now the York County Administration Center at 28 East Market Street in York, PA.

Click on this LINK for a yorkblog.com Full View of the two photos in this post if details are cut off in the cropping of images, or if they have been removed from the ydr.com site.

This post has an unusual origin. On a late afternoon in January, upon leaving the York County Administration Center, I saw two teens finishing counting names on the rightmost WWI panel. I heard one say to the other “197, same as your count.” I proceeded to walk part way to my car, however returned to the WWI panels because I clearly remembered hearing and/or reading the count as 195. I counted the names on the panels and was surprised; I also got 197.

On the way home, I stopped by the Veterans Memorial Gold Star Healing and Peace Garden in Veterans Memorial Park and counted the names on their WWI section. That count was 195. I suddenly became interested in knowing why the difference; 197 vs. 195.

After careful examination, two names were dropped from the new memorial when compared to the WWI era memorial at the former Court House. The two are: Victor A. Meckley and Jeannette M. Zinn. I’ve pointed to, via yellow arrows, those names as they appear on the memorial panels along East Market Street. 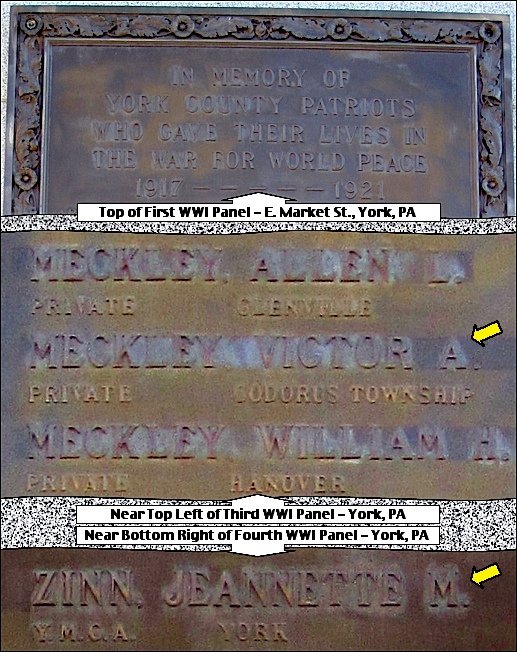 Private Victor Allen Meckley was born in Seven Valleys on December 4, 1894; the son of William & Emma Meckley. He served in Company C. 304th Engineers Regiment, 79th Infantry Division. Victor Meckley served overseas from July 9, 1918 until his death in France on October 4, 1918. He died from pneumonia and is buried in the St. Mihiel American Cemetery in Thiaucourt, France. A small photo and short paragraph about Victor appear on pages 94-95 of the book “York County and the World War 1914-1919” by Clifford J. Hall and John P. Lehn.

Several weeks ago, I asked a friend, who has better access, to conduct an extensive WWI military records search on Jeannette Zinn. I received his first results yesterday. Suffice to say, an article on Jeannette Zinn is going to be a future submission to the Journal of York County Heritage. As a teaser I’ll quote from an August 29, 1918 letter from the Executive Division, Military Intelligence Branch, War Department, Office of the Chief of Staff, Washington:

“The War Department has no objection to Zinn, Jeannette M. of 452 West College Ave., York, Penna. being sent for duty with the A. E. F. in connection with Y M CA.” Approved by M. Churchill, Colonel, General Staff, Chief, Military Intelligence Branch.

M. Churchill is Marlborough Churchill, soon to become Brigadier General in charge of the Military Intelligence Branch for the remainder of WWI and beyond. This letter indicates Jeannette is being sent for duty with the American Expeditionary Forces in Europe. Was the “Y M CA” job a cover? Regrettably Jeannette died, from pneumonia on her journey to Paris. She died in a hospital in Liverpool, England on October 4, 1918.

Jeannette Malvern Zinn was born on May 27, 1892. She died at the age of 26-years-old and has a gravestone in Prospect Hill Cemetery in York. I’m not entirely sure if Jeannette is buried in York or in England, because I’ve seen several of the veterans, whose bodies were buried overseas during WWI, as also having a gravestone at a local cemetery. Such is the case for George H. Brenner, whom I wrote about last week.

In 1921, ex-service women of the American Expeditionary Forces formed the Women’s Overseas Service League. One of their goals was to identify those in their ranks who gave their lives in the World War. On November 11, 1922, they released the names of 161 women who made the supreme sacrifice while serving with the A. E. F. These 161 women, known as “Gold Star Women,” came from nearly all the states across the nation.

Quoting an article entitled “NAME OF YORK WOMAN ON WAR HERO RECORD” from the Harrisburg Telegraph newspaper of November 11, 1922: “York, Nov. 11.—The name of Miss Jeannette Zinn appears in the list of 161 names of “Gold Star Women.” American girls who gave their lives in the World War made public today by the Woman’s Overseas Service League, compiled as a feature to Armistice Day. Miss Zinn was a daughter of Mrs. Sarah Zinn, now residing at 443 West College Avenue, and the late William Zinn. Most of these women rest under French soil, some in far-off Siberia, Armenia, China, Manila and others in England.”