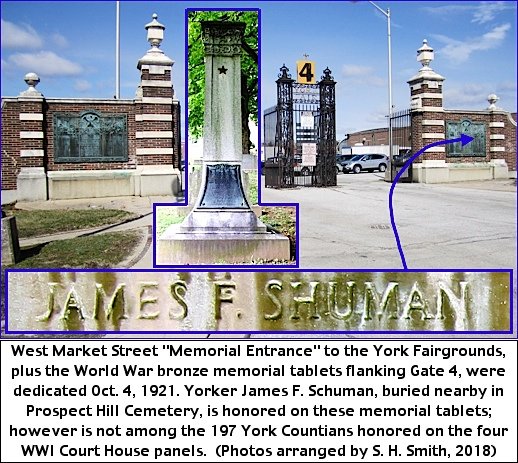 James F. Schuman is another York County veteran, appearing on the WWI memorial tablets at the York Fairgrounds, however is not among the 197 York Countians honored on the World War I panels, fronting four columns, at the York County Administration Center, located at 28 East Market Street in York, PA.

After researching James F. Schuman, I think he should be honored on the East Market Street panels. I provide the reasons why in this post.

Click on this LINK for a yorkblog.com Full View of the four original photos/documents in this post if details are cut off in the cropping of photos/documents, or if they have been removed from the ydr.com site.

I got a surprise when I compared the names on the Fairgrounds WWI tablets to the 197 names on the four WWI panels fronting the columns of the former York County Court House; now the York County Administration Center at 28 East Market Street in York, PA.

There are SEVEN names on the Fairground WWI tablets in addition to the 197 that appear on the Court House WWI panels. Those names are: Albert D. Bell, Walter B. Dick, Henry F. Emswiler, Charles H. Heaps, Henry Knaub, John Austin McKee, and James F. Shuman.

Five of these SEVEN veterans appear the book “York County and the World War 1914-1919” by Clifford J. Hall and John P. Lehn. They are in the section devoted to the York County patriots who gave their lives in national service during the World War.

I started by researching the two veterans who did not appear in that book, Henry F. Emswiler and James F. Shuman; thinking they would have the most reasonable explanation for not being honored on the Court House WWI panels. I was wrong in that supposition, per my research of Corporal Henry F. Emswiler and, with this post, 2nd Lieutenant James F. Schuman (the spelling in the majority of later records). They both should be added to the four WWI panels fronting the columns of the former York County Court House.

Prior to the placement of the four permanent “official?” WWI panels on the columns of the former York County Court House, all six columns were used to temporarily honor the York County veterans who lost their lives in the war. During May of 1919, fourteen additions were made to those temporary courthouse pilasters, as reported in the following Baltimore Sun newspaper article of May 19, 1919. Second Lieutenant James F. Shuman is included on that list; therefore at one time, his name was honored on those columns. 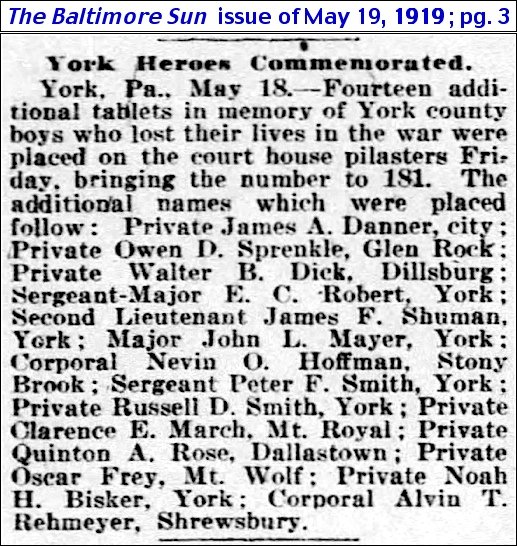 There are a few new names appearing in these fourteen. Most of the 14, in that newspaper article, are among the 197 “official?” veterans, however of the new names, James Shuman and Walter Dick are the only two from the 7 additional WWI veterans that I set out to research. I’m now projecting the total York County veterans, who lost their lives in World War I, could exceed 204.

The best way to start researching a WWI veteran is via copies of original documents available on Ancestry.com. The following is James Franklin Schuman’s AEF Officers Service Record during WWI. 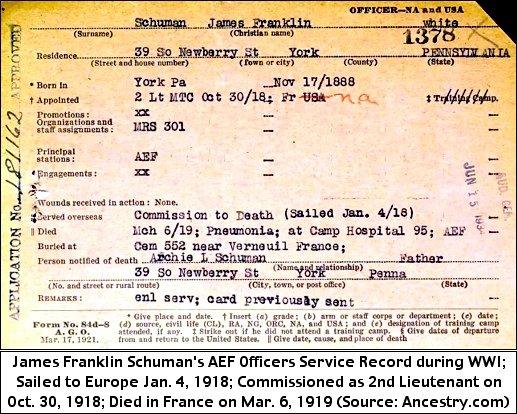 Second Lieutenant James Franklin Schuman was born in York, Pa, on November 17, 1888 and died March 6, 1919, from pneumonia, while serving with the AEF near Verneuil, France. He departed for service overseas on January 4, 1918 and was commissioned as an officer on October 30, 1918.

At first I thought, James was not placed on the “official?” permanent WWI memorial panels, because be died months after the war ended. However that does not seem to be the reason, since there are already at least 18 veterans on the “official?” panels who died months after the war ended. And there could be more than 18, since I have not yet researched when all of the 197 died.

James F. Shuman was the son of Artemus L. Shuman and Annie Shuman. This family lived at 39 South Newberry Street in York. James has been added to my list of “counted twice” Census records, since he was recorded at two places during the 1900 Census; both living at his parents home and at the home of his widowed Grandmother; dress maker Sarah (Kramer) Shuman, at 107 West Philadelphia Street. In 1910, 20-year-old James is working at an automobile manufacturer, while now solely residing with his Grandmother Shuman at 107 West Philadelphia Street.

Just prior to death, James was assigned to the United States Regular Army’s Motor Transport Corps in France. Following death, James was temporarily interred in Cemetery 552 near Verneuil, France. From the only partial obituary, found thus far, and published April 1, 1919: “The government will be requested to send his body to York for interment. He is survived by his parents, two sisters, Misses Fannie and Anna May Shuman, and a brother, Wilburt Shuman, all residing at home. Young Shuman was 27 years of age.”

I checked Find-A-Grave and located James Franklin Schuman’s monument in Prospect Hill Cemetery. His whole monument is shown, inset, within the fairground gate photo at the beginning of this post. The following is a zoomed-in photo of the memorial plaque on that monument: 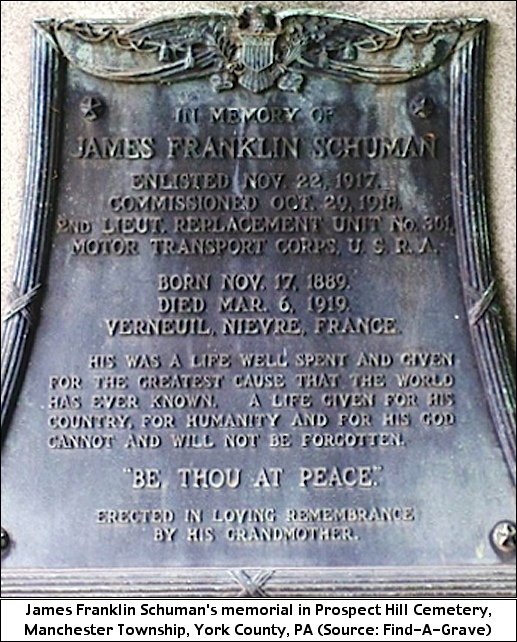 “His was a life well spent and given for the greatest cause that the world has ever known. A life given for his country, for humanity and for his God, cannot and will not be forgotten.”

“Erected in loving remembrance by his Grandmother.”

James F. Schuman was born and lived his whole life in York, PA. After giving his life, in service to his country, James’ body was buried in York County. Would you consider James Schuman a York Countian? I do, and thus believe he should be honored; by having his name returned to the WWI tablets along East Market Street.