These murals were on the wall of the York County Tourist Information Center along Mt. Zion Road; across from Avalong Farms Dairy Bar. The center opened on April 15, 1973. Cliff Satterthwaite, at the left, created the murals and Fred Goldstein, standing at the center, is the chairman of the building committee. For more details see: York County Tourist Information Center and Avalong.

Immediately to the right of Cliff Satterthwaite, and partially covered, is a mural of the Marquis de Lafayette proposing a toast to George Washington. Next to Layayette, on the counter, is a scale model of the Gates House, still standing in downtown York as part of the Colonial Complex, where the toast occurred. For more details see: York’s Life Size Statue of General Marquis de Lafayette.

The mural on the wall, immediately to the right of Lafayette, depicts the first iron steamboat built in America. Yorker John Elgar’s innovative iron-hulled steamboat was his solution to navigate the erratic Susquehanna River. In 1825, John Elgar designed and built the iron-hull of the steamboat in York and then served as captain during the voyages on the Susquehanna River. In the same shops Phineas Davis, who had prior experience with steam engines, built the propulsion system for the steamboat. For more details see: The Design of America’s First Iron Steamboat.

Immediately to the right of the steamboat is a balloon mural; representing the first aeronaut to soar over York County in 1835. How many remember the balloon mural moving up and down through a slot in the ceiling? There was a motorized pulley that continually raised and lowered the balloon about a foot above and below the drop ceiling. For more general details see: First Balloon Ascensions in America.

James Mills was the first aeronaut to pilot a balloon in York County. He did so on July 25, 1835, taking off in the Borough of York and landing in Lancaster County. Continue reading for details of his flight.

Aeronaut James Mills advised the leading citizens of York, Pa., that he would perform a balloon ascension in the borough, provided they would guarantee $800 to cover his expenses. Mills got his guarantee, which in terms of today’s worth, that is equivalent to $22,200.

Tickets were sold at 50-cents, to enter a fenced amphitheater erected on Penn Common. The people paying this admission got to see the festivities; accompanied by band music. The generating of the hydrogen gas and filling the balloon was the main attraction. Once the balloon was a few feet in the air anyone in the surrounding area got to see the balloon ascension for free.

Mills must have profited from his York County flight of July 25, 1835, since another flight from Penn Common was planned for the following month. From the newspaper microfilms of the York County Heritage Trust, the following ad informed the public of the initial balloon ascension in York County, Pa.: 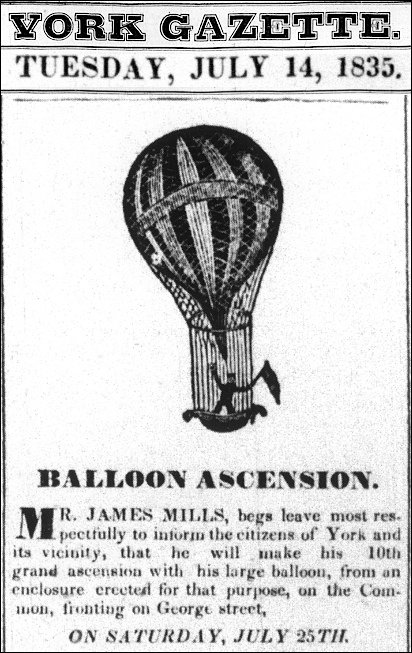 The July 28, 1835 issue of York Gazette reported on the first balloon ascension in York County; lifting off from Penn Common in the Borough of York.

Mr. Mills, the celebrated American aeronaut, made his tenth grand ascension on Saturday last from an enclosure, on the commons near this borough. The weather, in the commencement of the afternoon, was oppressively warm; and a shower, at about two o’clock, threatened to disappoint the curiosity of the multitude assembled to witness the ascension. It ceased raining, however, in about an hour, and the remainder of the afternoon was uncommonly pleasant.

During the afternoon, Mr. Mills let off several small balloons, at intervals of about an hour. At about half past 4 o’clock, the inflation of the balloon being completed, Mr. Mills attached to it his car, in which he took his position, and the balloon and car slowly rose to a height of 8 or 10 feet, restrained by cords held by persons below. After floating at that distance from the earth for a few minutes, Mr. M. ordered those below to “let go” the cords, the main rope was cut, and like a freed bird the balloon ascended rapidly with its adventurous constructor.

A deafening shout of approbation from the spectators as the aeronaut rose above the enclosure, was acknowledged by the latter in a graceful and entirely unembarrassed manner. The balloon, after ascending almost perpendicularly to an altitude of about 1200 feet struck a current which bore it, in a direction somewhat South of East beyond the ken of the keenest unaided eye. The number of persons assembled to witness this grand spectacle, within and without the enclosure, is variously estimated at from five to seven thousand.

Mr. Mills landed safely near Columbia, on the Susquehanna River, about 13 miles from this borough.

A week later, the August 4, 1835, issue of the York Gazette printed an expanded account of the balloon ascension, quoting a letter received by James Mills. He noted that his greatest elevation achieved was 9,483 feet, calculated per his onboard barometer, and where he also recorded a temperature of 35 degrees Fahrenheit, versus 80 degrees at the surface. Mills noted he had “hoped to float to the sea-board.” The following three paragraphs, of his letter, provide the reason why he was forced to land, as he approached Columbia:

At this time I was sorry to perceive a dark cloud approaching me rapidly from the northwest; its fleetness was fearfully marked by the black shadow, which careered along the surface of the earth. That and the thunder which was in the clouds, induced me to think of taking shelter at Columbia, so that I might afterwards continue my voyage. I accordingly let out some gas, and finding below, a more southerly current of air, was enabled at 10 minutes after 5, to land at the foot of the inclined plane, in the farm yard of Mr. Strickler, about one-fourth of a mile from Columbia.

Without getting out of my car, I was conveyed by the citizens, by means of my anchor rope, into Columbia, and remained there nearly an hour.

Having an abundant ascending power, I prepared to start again, when fortunately a friendly eye, from the top of a neighboring house, detected a fracture in the netting of the balloon, which was probably caused by the projecting branches of some trees, under which it was drawn, in entering the town. This unlucky accident rendered the further pro-ecution of the voyage impossible, so that I was reluctantly compelled to let out the gas and fold up the balloon. Had I not been drenched with rain before starting, I might have risen above the clouds, and avoided the risk of being carried out of my way, but wet as I then was, the cold was too severe even at the elevation already attained.

James Mills utilized a large room in the York County Academy to make repairs on his balloon and another flight from York was planned for August 22nd. His eleventh balloon ascension was never made. At 29-years-old, James Mills was discovered dead August 16th, in the room where the balloon repairs were taking place, and was buried in the Methodist Episcopal Cemetery in York.

A coroner’s inquest found Mills had suffered hemorrhage from the lungs. Balloons, of that era, were made of silk, and coated with a varnish, containing a rubbery compound, to tightly trap in the tiny molecule, which is hydrogen gas. Mills likely was overcome with the fumes of this coating while making balloon repairs. Next in this series, a YorksPast post will examine the 1869 through 1886 balloon ascensions of Dr. James A. Dale, a wealthy Drug Store owner in York, Pa.